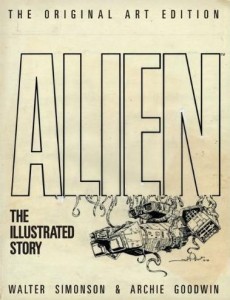 Two of comics’ greatest talents joined forces in 1979 to bring Ridley Scott’s epic Alien motion picture to the comic book page. Out of print for over thirty years, this brand new edition (released in time to coincide with Scott’s latest opus Prometheus) has been meticulously restored from original artwork in Walt Simonson’s studio — presenting for the very first time the definitive artist’s edition of the greatest sci-fi horror ever produced.

It collects Alien: The Illustrated Story b/w comic strip, scanned from the artist’s original art boards, plus an in-depth interview with Simonson, the original script pages, colour tryouts and sketches.

As with all original artist’s gallery editions this is a collection of classic comic material and I’ll be reviewing the book and not the story. For a complete list of all current and announced editions, with review links, please visit our Index.

Heavy Metal magazine was commissioned to do a comic adaptation of the movie Alien, and in 1979 was partly serialized in two parts as a teaser for the graphic novel. Lucky for us Walt Simonson has kept almost all the art he’s done in his career and Titan Books was able to put this volume together from his original art pages.

I received this book for Christmas last year, but it lingered in the closet with all my other giant books until recently when I dug it out and gave it a good read. I was initially put off last year by seeing the softcover collection reprint of the coloured series: I found the colours harsh and almost painful to look at. Looking at this work Simonson’s pencil and ink work shine; it’s a pleasure to read.

Not having seen the film in many years the book read well: the pacing was spot on and the story was clear and concise. Dialogue and interpersonal relationships dominate between the moments of gut wrenching tension and fast action. Ultimately the shock of seeing the alien burst from Kane’s chest didn’t work in a comic book, nor did the alien uncoiling itself or creeping behind the crew. Those elements are best left to film, but it’s a worthwhile effort by Goodwin who was at the top of his game by 1979.

Shot from Simonson’s originals, Titan had to make a few concessions. The art pages were different sizes so they focused on the art on the page to determine size; the 13×17″ size of this book works wonderfully. As well there was no lettering so they had to add it to the scans, although sound effects like the one above are part of the art pages.

This Original Art Edition is filled with extras: a signature plate with Simonsons’ in pencil, complete script, colouring examples, an in-depth interview and an afterward by Simonson. Packed with features and well produced, this is a bargain at $75 and is heavily discounted online. Titan produced 2000 of these and they don’t seem to have done well: this book surpasses the material and value presented by IDW in their Artist’s Edition line. Let’s hope Titan has a few more up their sleeve, perhaps from British material or creators.