The comic, though a decades old medium, is not nearly as permanent as one would hope. The books are not made to last very long, and the value of older prints is evident of this. Ones precious issues, whether new from the store or a fifty-year-old print bought at an auction, can fall prey to something as simple as a rainstorm, summer humidity, or the dreaded Cheeto-Fingers. Thus it seems logical for it to take a step to a more permanent, or at the very least less fragile, state of being.

Thus; the web comic, where we can do away with pulp pages, Wednesday shipping times, and the cost of a new book. However, with such freedom of expression and the notable lack of any editors, there comes into place Sturgeon’s Law: Ninety Percent of Everything is Crud. If everyone can take a swing at fame, that doesn’t mean everyone is going to get a hit. Or that anyone is going to. So I’m going to try and do my best for you, the readers of this, to act as a filter of all that 90%, and give you what I think are the best and brightest that the internet has to offer: I can only hope that you’ll like at least one or two of them.

There is a lot of history here, so this’ll be a long one.

It’s funny that I start with this one, as strictly calling it a comic wouldn’t be the most accurate use of the word, but we’ll get to that after. The idea started before the site, where Andrew started a forum game where he drew the first panel, a man in a cell with a pumpkin, a key, and a barred window, then, in the style of old text-adventure games, he drew the first command that was given to the character, so on and so forth creating an interesting chain of events. This came to be known as ‘Jailbreak’, his first, and unfinished, adventure. After the popularity of this, he started up the site and christened it with Bard Quest, which stayed along similar lines as Jailbreak, but in a more ‘Choose your own adventure’ format. Also unfinished, Andrew took the experiences from both of these, and from it began his third story.

Problem Sleuth started on March 10th of 2008, and ended exactly a year later. As Andrew said at the end; A couple hundred people tuned in on the first day. A couple hundred thousand tuned in on the last. It chronicled the antics of three hard-boiled detectives (Problem Sleuth, Ace Dick, and Pickle Inspector, in order of appearance) and their efforts against the dastardly Mobster Kingpin in an increasingly complex stream of events designed and navigated largely by the readers’ submitted commands. 1621 pages long, it is the only completed adventure, and set the stage for the next and current one.

Homestuck started on the 10th of April, with Andrew trying to write it in Flash. As Flash is difficult to write a comic in, it restarted on the 13th of April, and went forward from there. Differing from the prior three, Homestuck incorporated a sort of pre-planned plot (Although a lot has been added on by reader input), but also makes use of its digital format with flash animations, animated GIF files, interactive pages, music (over 170 original songs released), and a whole lot more. Starting with a 13 year old boy named John Egbert, who was alternating between playing ‘Sburb’, a reality altering game, and managing a stubborn inventory system, it has since evolved into a 2305 page epic (As of now, about 1:30 am on the 29th of June) involving all manner of things from time travel to paradox babies to time-displaced internet trolls to Nicolas Cage in Con Air. Between these four, Andrew has gone from an unknown former without a site to getting about 3.8 million unique page views last week alone, and a few thousand dollars a month in advertising revenue.

Oh yes, and a brief note: Some of you are wondering how Andrew animates in MS Paint I’d imagine. Well to be honest, only the very first page of Jailbreak was made in the program; all others are in Photoshop.

Overcompensating: A Journal Comic with a Seething Disdain for Reality, by Jeffrey Rowland and Wigu, a Comic on the Internet

overcompensating.com – Updates Daily, with occasional breaks.
wigucomic.com – No one actually knows when it updates but there’s a large archive. 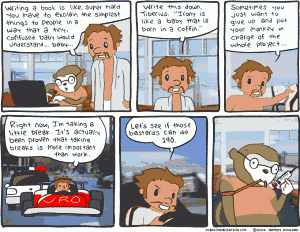 From the desk of the man in charge of Topatoco, where a large verity of web comic folk pitch their wares, Overcompensating is a special sort of journal comic, in that it fairly frequently alternates between a sort-of-fiction and autobiographical comic, or both at the same time. The strip is populated by a number of characters, some who are based off of people that the creator knows, some who just are the people that the creator knows (Often other web comic creators), some who are people that Jeffery knows of, and the rest who are people that Jeffery has thought up. Though sometimes fictional, the main character is an author avatar, who tackles a verity of everyday subjects, such as:

>Where am I and what happened last night?

>What’s in the news and a humorous take on is.

>That horrible fad (whether internet or real) that you think can never actually be true but is really everywhere.

>That horrible reality that everyone has to face but no one really wants to because its so horrible it’s why babies cry when they’re first born.

My point is that Overcompensating is like if John Stewart was a lot more cynical and misanthropic and kept a journal comic. It makes for a good read, but not everyone’s cup of tea.

Wigu, on the other hand, follows the adventures of Wigu Tinkle and the rest of the unfortunately named Tinkle family. Wigu, an over imaginative child who spends a fair amount of time watching TV and playing video games, where he is subject to the pop-culture phenomena of Butter Dimension3, which is actually a real dimension that exists solely on the power of Wigu’s belief in its existence. From the beginning a verity of antics occur as Wigu tries to lead a fairly normal life amidst the influence of Topato and Sherriff Pony, two denizens of  Butter Dimension who try to indirectly keep Wigu’s interest in their assorted media the primary part of his life so that they don’t stop existing.

They both make for a good read, but for their own individual reasons.

The Meek, by Der-shing Helmer

www.meekcomic.com – Updates Once or Twice Weekly

Not Work Safe because there is occasional nudity (Notably in the first chapter). 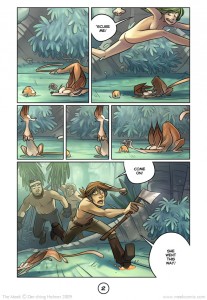 The Meek provides me with the interesting experience of guilt, derived from the fact that when I’m reading it I forget that I didn’t steal it from some poor soul, and it is in fact free to read on the internet. While most webcomic artists are not professionals, and indeed many don’t even have any artistic training, Helmer composes his work very well in both art and writing styles. Unless you’re squeamish about the fact that one of the characters prefers not to wear clothes, this is a good place to start, as it is written to be in a tangable comic format.

Though only two chapters have been fully released, both of which serve to introduce the seriesë characters and concepts, the future plot is alluded to by the author, who has already sketched up more than 350 pages. From the About page on the site:

The Meek is a graphic novel about Angora, an inexperienced young girl who has been sent on a quest to save the world. War looms on the horizon, and at its helm is the Emperor of the North and his hellish adviser. The two countries are overwhelmed with as much terror, crime, disease and revolution as they are with those who wish to create peace. Armed with only her instincts and an unexplainable power, she must experience and judge the world and decide once and for all if it is truly worth saving.î 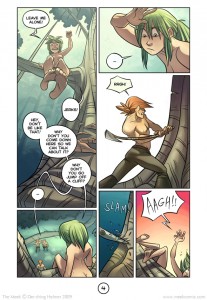 Lacking the history of the previous two, The Meek may not have as much of an underlying fan base or comic archives, but it is no less fantastic for it. Plus, with a new chapter starting on the first of August there’s really no reason for you to not at least give it a shot.

While I’d love to tell you more, there are really so many that are worthy of mentioning, I cannot simply ramble on endlessly. These have just been some of the ones that I feel are most likely that some of you will come to enjoy, it you don’t already, made by ordinary people that are wholly deserving of recognition.

Plus it’s good to be able to read something while eating without using chopsticks and latex gloves.

﻿Liam Skillen is an unemployed high school student and generally tries to be a pretty cool guy. Being both unemployed and kind of lazy, he reads a lot of things on the internet which qualified him for this pretty handily. If you need him for anything he can be reached using e-mail at [email protected] where despite him being on the internet a lot he is kind of bad with checking it.