Last week, I had a number of special guests write about who they thought was the best superhero ever. From music guru Alan Cross to librarian Genevieve Kwant, the people and responses to the question and interpretations of the question were rather varied.

But I never answered the question for myself or even defined it until after I did last weeks column.  I figured I would just let everyone else weigh in and then I’d make a decision myself.

For my version of “Who is the best superhero ever?” I decided that I would go with a character I thought was the most hero like.

Yeah I know, even my own version of the question is pretty vague but it worked out in my head alright.

From there I had a couple of ideas and slowly whittled them down.  Batman and Spider-Man both floated around but ultimately never cracked the top two.  Not because they weren’t heroic just because I had character that I felt fit my bill more than they did. Then ultimately I got down to two who battled it out for a little while. 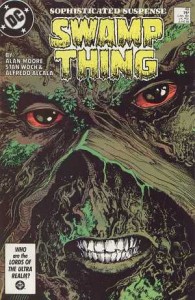 Swamp Thing (specifically Alan Moore’s version) nearly made it to the top of the list.  Especially after I re-read issues 51-56.  What made Swampy a superhero in that run is pretty much your typical superhero stuff really but with a little more 00mph to it. In Moore’s run on the book, all Swamp Thing wants to do is live in peace in the swamp with Abby.  That however much like other heroes, he is interrupted in this simple life by the end of the world, the kidnapping of his girlfriend etc.  But Swamp Thing rises to the challenge.  He’s one of the few characters to beat the crap out of Batman. Swamp Thing even turned Gotham into a jungle just to get his girlfriend back. Swampy has the powers of a god but still struggles to retain his humanity.

Ultimately though, one hero stood out from all of the rest. 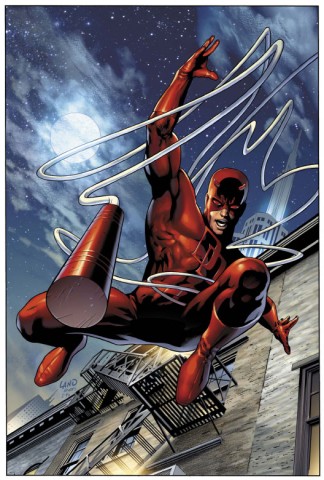 Frank Miller once said that Daredevil should have been a villain and he’s right. That’s part of what makes Daredevil such a great hero.

And he’s blind. Sure, he has those other super sense and stuff but it still must suck a little. Watching physical comedy for instance would be pointless and he has no idea how attractive Olivia Wilde is.

Now add all of this stuff up.

Daredevil should be sipping cocktails with Doctor Doom, not protecting Hell’s Kitchen.

Despite all of these challenges, Daredevil keeps on fighting. 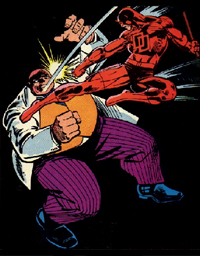 There’s something about a character that battle through all this adversity but makes it through the other side that appeals to me. Sure he kind of becomes a villain every now but it’s never a full conversion… except Shadowland and he was possessed so that doesn’t count. Not only that, his trouble is pretty constant. Every time he makes it though the tunnel, he’s just faced with yet another train.

But he keeps going.

His powers could easily lead to taking over (as Shadowland and the Bendis run examine) but in the end he ends up going back to the red tights and back to work.

Did I mention he doesn’t kill?

That’s right, Daredevil (with once again the exception of Shadowland) doesn’t kill. Even Bullseye got a pass until the whole demon possession thing, and Bullseye has killed two of Daredevil’s girlfriends. 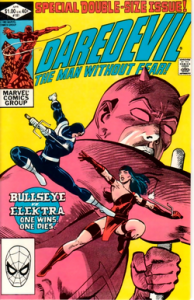 It’s all of these qualities that I feel make Daredevil the best superhero ever.

Next week I’ll be at Fan Expo with a lot of the Comic Book Daily crew. I should be moderating a few panels which are unconfirmed at this point BUT I will be hosting Team Spirit: The Fantastic Four workshop. We’re going to be joined by Jonathan Hickman, Steve Epting and Marko Djurdjevic for a look at how the creative process on this awesome run on the FF works. Where the stories came from, how they work as a creative team, character designs, if you ever wanted to know how one of Marvel’s best team books was put together, this is the workshop to check out! Thursday, 7pm in room #717.