“In a half shell, they’re heroes four.

In this day and age who could ask for more?”

Wednesday marked the release of a comic I was kind of surprised to see happen. Teenage Mutant Ninja Turtles #1. 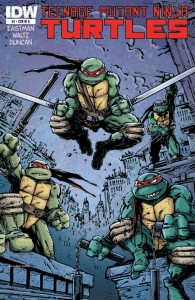 When Nickelodeon bought the Turtles from Peter Laird in 2009, I wasn’t sure what they would do with them but I was pretty sure it was going to be too kid oriented for my tastes.

While my love of the Turtles was first spawned with the cartoon in the late 80’s, it was the first film and the comic that really grabbed me.

The film is still one of my faves. To this day, my best friend and I will quote it.

TMNT was the first indy comic I can ever remember encountering and at the time it was pretty different from other stuff I read. Sure, it had mutant animals but the world the Turtles lived in seemed a little more real to me in some ways. The best example I can give is in one particular issue while marching through the sewers, the Turtles hear music above them and recognize it as Metallica. It was awesome that the Turtles like a band I had just started discovering. Combining that with the grittier look of the comic and violence, I was hooked.

I’ve always hoped the Turtles would go back to these roots in a bigger spotlight. I had hopes that the 2007 film would come close in tone to the first film but it was still a ways off.

And then the announcement of this comic came.

And Kevin Eastman was back?

Eastman had pretty much left the Turtles long before Laird sold them so it came as a surprise to a number of fans I know that he was returning to his creations. With his return co-story writer and layouts, Eastman brought to Teenage Mutant Ninja Turtles a number of questions:

Is this the Turtles Eastman would have done had he kept with the property?

Is this just IDW trying to cash in the name?

How mature is the material?

Being that it’s only a first issue, it’s still a little hard to judge exactly what the series is, in fact it leaves a lot of questions then it does answers both in terms of the comic storyline and the series itself.

What I can tell you is this feels like a Turtles comic.

It just feels authentic; while the actual story world may have changed for our heroes, it still feels right. Artist Dan Duncan really nails the look for me and while the story is a bit of a mystery still, Teenage Mutant Ninja Turtles has been added to the rare spot of “Must Buy The Floppy” as opposed to “Wait For The Trade” in my buying list. It has completly sucked me in and I now need answers damn it!

There is another question I haven’t addressed yet.

Are the Turtles still viable?

According to my shop, sales were very good and I got a first hand look at how viable the Turtles still are while waiting to check out.

There was a kid in front of me, probably around the same age as I was when I first discovered the Turtles and sure enough, IDW’s first issue was on the top of his small comic pile.

Must admit, this made me smile.