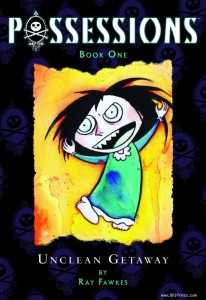 The first time I came across Ray Fawkes work was through the 2008 series Apocalipstix which he wrote with buddy Cameron Stewart providing art. the book was a wonderful blending of Mad Max with Josie and the Pussycats. (I was pretty sold on the book from the start but became a huge fan upon re-reading it and checking out all the little easter eggs within the book including a De Carlo home insurance sign and what i’m fairly certain is a Nick Cave appearance.)

His most recent work is Possessions book one: The Unclean Getaway. A wonderfully twisted book that tells the tale of possessed little girl who ends up in a strange house surrounded by other oddities.

I got to speak briefly with Ray at Wizard World Toronto about his newest book, future plans and the iPad. Even though I was spectacularly forgetful of character’s named he still drew me a beautiful pin-up of Gurgazon the Unclean which is currently hanging above the kids’ section of my store. It’s awesome!

Peter DeCourcy: So I got to read your newest release “Possessions, Book One” and it’s kind of a different story. First of all give us a synopsis of it.

Ray Fawkes: The story is essentially about a bunch of ghosts who are kept captive in an eccentric old lady’s house. She collects them like she would exotic animals. So it’s like a zoo of ghosts, kept for this one rich old lady’s enjoyment. The story is about a brand new addition to the group of ghosts who is a possessed little girl, a demon in a little girl’s body named Gurgazon the Unclean. Gurgazon brings trouble and chaos wherever she goes. She brings it to the zoo in her attempts to escape immediately upon being inducted into it. It’s all slapstick. It’s all Looney Tunes style stuff.

PD: It feels very much like “One Flew Over the Cuckoo’s Nest” almost… The floating light.. 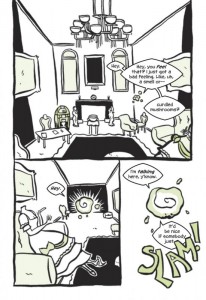 PD: Lights, yes, who seems very much like the Billy Bibbit.

RF: Yes, he’s like the lonely guy who wants someone to talk to.

PD: And then there’s the poltergeist who is always writing on the walls and a host of other creepy entities, it’s very well done, but I’m wondering who is the audience for this?

RF: Well, the audience for this is sort of two-fold. On the one hand, it is an all-ages book so the audience for it, it’s intended to be readable for the audience of seven plus. Also it’s layered with jokes and references to things like “One Flew Over the Cuckoo’s Nest” for adults who may have a little bit of the collector urge. It’s almost from the point of view of their collection. Being kept – what does it mean to be kept for someone’s pleasure.

PD: Now you’ve set up a bunch of seeds for future books…

PD: This is definitely a world that I want to come back to because I have so many questions, especially about how the house is set up, and who is the Butler?

RF: Yes, what is he exactly?

PD: What is he? If he hasn’t aged? And why is she collecting this? Because when she first comes in she says “Oh I can’t wait to show this to…” and she names another lady. It is very much setting things up. 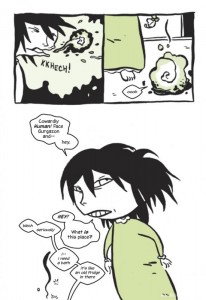 PD: So how many books do you have planned for this?

RF: Book One is meant to introduce you to Gurgazon the Unclean because she is really the driving force behind most of the stories. I have definite plans for five or six volumes and potential plans for more beyond that. There are things that will definitely be explored. What is the nature of this collector – what she’s all about and why she collects ghosts; who the butler is, where he comes from; and I do intend to go into where all these ghosts come from and how they were originally captured or brought into the house. Some of them are very old, one of the main characters is a headless woman who was a French noble who was beheaded during the French Revolution. Her story will be told eventually. There is a haunted jukebox. His story will be told. All these things will eventually play out and they all figure in to one grand story. While each book can be read on its own, like this first one “Unclean Getaway” has its own kind of ending, they all do figure in to one larger story that will eventually be told – an epic, I guess.

PD: It does feel that way – as much as it has that Looney Tunes action with her constant escape attempts – there is that undercurrent of “what is going on?” and how are these creatures… it feels like they’re there for a reason. In terms of art, you chose a one colour scheme of green. Is there any particular reason?

RF: Yeah, actually what happened was when I was showing this to the publisher I asked if we could do a spot colour, and they asked what colour I would be interested in. I facetiously said “well obviously pea soup green” since we’re talking about a possessed girl.

PD: Well it works in her first appearance. 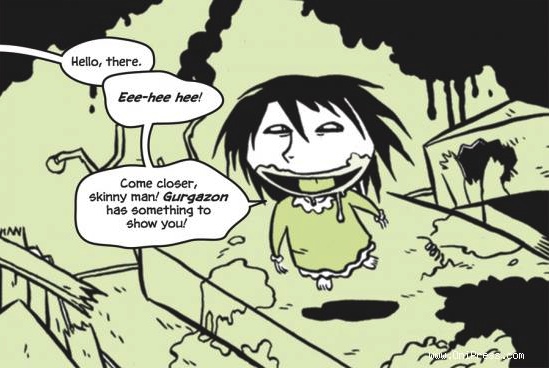 RF: Yeah, and she does her fair share of vomiting. So that was my joke, but it actually kind of stuck and I found it was really fun to play with the green and I could do a lot of ghostly effects with it. So the green it is, that was our decision. As far as I can tell it’s going to stay that way. I don’t intend to change to colour too much in further books.

RF: But you never know, we’ll see how I feel, I’m a fickle creature so it could always change. We’ll see.

PD: Fair enough. So outside of “Possessions” what else do you have on the horizon?

RF: There is a long time project that’s been in the works. It’s actually a book for Top Shelf Publishing. It’s a horror book called “Junction True” and it’s being painted by Vince Locke who used to do a book called “Dead World”. He does a lot of stuff now. He does the artwork for a band called Cannibal Corpse. 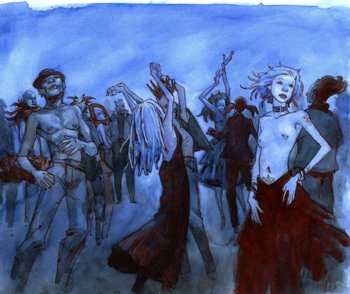 a preview image from the forthcoming Junction True with Vince Locke

RF: Yeah. That is a much more adult horror book that in the works. I have a couple of self published pieces coming as well. I’m not going to talk to much more about them until they are more solid. And “Possessions”, I’m working on volume two right now. It should be out January of next year. We’re sticking to an at least yearly schedule. I might get them to release these books quicker than that so right now might attentions are split between the horror book “Junction True” for Top Shelf and Volume Two of “Possessions” which does answer a little bit about the collection. It shows you there are a circle of old ladies who all collect these ghosts and so you’ll see a lot more ghosts and you’ll see a lot more of those old ladies.

PD: That’s awesome, we’re really excited. Just changing gears for a second, how do you feel about the iPad that’s coming?

RF: I feel great about it. I can’t wait to…I think it’s a great idea. I’d like to get one and I’ve already seen they’re talking about putting comics on the iPad which I think is a fantastic idea. I know a lot of people that I think given the chance they would easily subscribe to a bunch of titles if they could get them delivered electronically.

PD: You’re very close with Cameron Stewart who’s a member of the webcomic collective Transmission X. Have you thought about serializing anything on the internet?

RF: I have. To tell you the truth…

PD: You did have one that was called Ice?

RF: Yeah, it’s called “Ice Blink”. That’s serialized on Top Shelf’s website. “Possessions” actually was originally going to be a web comic and Oni Press snapped it up before I could put it on the web. I do have another piece in the works that I’m likely going to be launching on the web at some point. I’ve actually been talking to Cameron, just getting some advice about how he’s been doing it, because I think he’s been doing a great job with “Sin Titulo”.

PD: Well thanks very much for the interview, I really appreciate it.

PD: Best of luck with all your future endeavors.

RF: Thanks very much.

Possessions Vol One: The Unclean Getaway is available now is all fine bookstores. I highly recommend grabbing a copy. You can check out Ray Fawkes at his website RayFawkes.com.