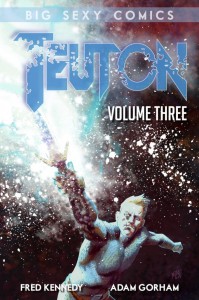 We’re aspiring creatures, all wishing and hoping to reach that next phase in our lives where we meet our potential; where our talents transcend the height of our self-perception. It would appear though that an essential step, one we often miscalculate, is the simple reality that we’re not nearly as exceptional as we think we are, that there is always room to improve. And once that’s realized, it’s then we can begin to grow.

“I’m learning there’s a difference between being able to tell a good story and being a good writer,” says Fred Kennedy, 102.1 the Edge radio personality and comic scribe behind the Teuton graphic novels.
“When I’m working on something, I feel really good about it. Like with Remnant (formerly titled Son of Gothra); when I started to write it I felt it was so much better than when I started with Teuton because my perception and approach to writing was so completely different. Now what I thought was so much better, I think I can do so much better than that now. And it’s just because you learn, you read and you develop.”

Part of that evolution for Kennedy has been immersing himself in classic character arcs, which has allowed him to discover different approaches to storytelling.
“I feel like my ability is just so much better than it was and if you ask me a year from now I’ll say everything I’m writing now is just garbage and I think that’s a healthy way to look at it,” he says. “For me it’s never good enough, and I get very angry when people walk around and act like everything they do is golden. It’s never good enough, it’s always a matter of needing to get better and I’m desperate to improve myself. Every time I finish writing something I don’t ever expect people to go, ‘wow, this is really good.’ I expect them to go, ‘well this is good, what can you do now?’ That to me is the best compliment.”
Kennedy and artistic collaborator Adam Gorham first released their Crusade-centric epic,Teuton in 2011, following it with a second volume in 2012. Set during the northern Crusades, the story follows a Teutonic Knight–Andrus Tamm–as he tries to destroy any remnants of the pagan religions. As it turns out however, as the story unfolds Andrus begins to find himself embroiled in the machinations of the very same pagan gods he’s out to help destroy. Kennedy says the religious backdrop is an example of history, an ongoing trend that stretches from the time of the Roman empire to present day.
“You could say an idealistic crusade is going on today when you get into countries like Afghanistan and we begin to shove our version of education down their throats. It’s easy for us to say the way they do things is wrong, but it’s just another way of doing things. I’m not saying it’s okay to butcher people, but it’s no different than anything that has ever happened,” he says. “People are people. You could take someone who was born in 1500 and a kid born in 2000, switch their places and they’ll grow up to be products of their time.”
Kennedy says he picked this particular backdrop–the northern Crusades– because it’s rarely talked about and he’s fascinated by that period of history.
“It’s a really interesting point of interest because it was the last pagan nation in Europe and they fought to the bitter end (being when the King of Lithuania converted to Catholicism). It was really cool because the whole conflict started when the people along the northern coast of Lithuania converted to Catholcisim because these traders only traded with other Catholics,” says Kennedy. “So sure, we’ll take your religion and your money and so they became prosperous. As for the pagan tribes that were close by, well it’s easy pickings and they were attacked and they kept raiding villages. They asked for help and the Teutonic order came and it was like they came to help, but by help they meant takeover and establish their own state. It’s an interesting back and forth how the pagans started the war, but the pagans felt they were being persecuted by the Catholics who were denying them access to wealth too. It’s just everybody pointing fingers at everybody. I was really drawn to that element.” 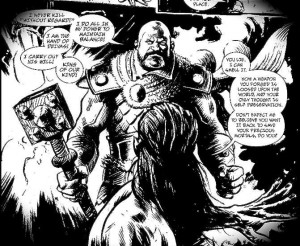 Kennedy also just has an affinity for sword fights.
“When you read volume one, the first page opens up with a big battle taking place at the very beginning of winter and a lot of big set battles happen on snowy fields,” he says. “As a Canadian I just love that idea. I love that visual aspect of it and the element of familiarity. Battles with swords and weaponry like that are just way cooler in the snow.”
With the third volume completed and on sale at Fan Expo this weekend, Kennedy looks back and feels the story, the art and the totality of his and Gorham’s work have dramatically improved from the first volume to their current work.
“I think it’s light years better than when we started. I think the story is great, and I think the ending is awesome,” he says. “Last September I got to talk to Jimmy Palmiotti on my podcast and we talked about the nature of stories and suffering and how great characters suffer. No one comes out on top. The ending is a little bit darker than I think people are going to expect. It’s not George R.R. Martin dark, but it’s not nearly as rainbowed as we wanted it to be when we started writing it.”
Part of Kennedy’s evolution has come from his own drive, combined with his sponge-like yearning to learn and discover new ways to present stories. It’s something he’s discovered with greater clarity between writing volume one of Teuton and the third volume. 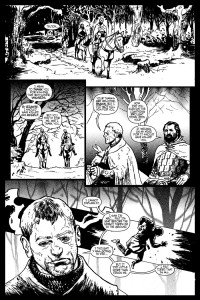 “When we set out we wrote the plot, we didn’t write the story. I’ve learned that there’s a huge difference between plot and story. So the plot was kind of mapped out but in terms of what happens to the characters as they go through the plot, that wasn’t hammered down at all. And Andrus really develops and changes as he goes,” Kennedy says.
He says Gorham’s art has improved as well in that span, and he’s been extremely happy with Gorham’s ability to hone in on who the characters are from a physical standpoint, while maintaining the continuity of those aspects of their stature artistically relative to the other characters.
“We didn’t know the other characters, we didn’t know who they were. We didn’t know how to draw them, how to create them properly,” Kennedy says. “But if you want to be a creator, just do it. Go create.”
They now have a stronger understanding of who the characters are, fleshed out by the minor nuances Gorham has maintained throughout the volumes, such as a small scar on Andrus Tamm’s lip.
“Adam knows them. He breathes life into these characters,” he says. I think he’s become more comfortable with his artwork. I think we both have.”
With the story now completed, Kennedy hopes fans of their work get one simple experience from reading Teutonor anything else he writes, such as the upcoming six-issue graphic novel, Remnant , to be published through Frozen Beach Studios.
“I hope they feel it’s a good story, and then maybe someone who reads the story will go pick up a book and read about the history behind the story,” he says. ” I really like the story, I like Andrus and I relate to him. There are always things I have to do, not because I want to but because I have to. And he’s fighting a war he doesn’t want to be fighting in and everyone else can relate to having to do things they don’t want to do. And just when you think you’ve got a way out, you end up doing something just as bad in something you didn’t like doing in the first place. It’s relatable.”
He continues.
“Finally at the end you get an escape, a release from it. But the cost of that escape and release is everything that you’ve built up about yourself. You’ve totally compromised yourself in order to change. So what you’ve believed in, it feels like a series of betrayals. And it is,” he says. “The thing I like about Andrus as a character is he’s a good guy. He doesn’t betray people. Even if he doesn’t like you, he won’t betray you. That’s not how he rolls. He’s got integrity. So what I hope people get from it is, is that he’s a flawed character, but he’s a good guy and it’s a good story.”
As his comic book writing career continues to blossom, Kennedy has one hope he wishes himself to be able to pursue and evolve towards.
“I want to create stories that are layered, that aren’t superficial. I don’t want to be the Michael Bay of comics,” he says. “When I say that, I mean I don’t want to be the guy where people go, ‘oh Michael Bay just makes explosiony explosions. I don’t want to be known for just writing dudes with swords being tough guys. No, I don’t want to do that. I don’t want to be thought of as that, I want to be thought of as the guy who tells a really good story.”

To find out more about Teuton, Fred Kennedy, Adam Gorham or about any of their other work, please visit Big Sexy Comics online. You can also visit Adam’s deviantART page to discover more of his artwork.
# Adam Gorham# Fearless Fred# Fred Kennedy# Remnant# Son of Gothra# Teuton