Recently one of Comic Book Daily’s writers posted a blog about a panel that is happening this weekend at Fan Expo. Ivan Kocmarek (click here to see his post) in this post he described each of the panellists. Two of them being women. They were described as “..one of those rare female anomalies who are mired in the often chauvinistic world of comic fandom” and “…another anomalous female who understands and appreciates what comic fandom is about and is heavily into the comic scene in Toronto”.

I am sorry to say Ivan, but women who like comics are not anomalies, not anymore.

I have written an article on the site about this before titled “There are more of us then you think”. The perception that comics is an old boys club doesn’t really work anymore. At Fan Expo alone, if you look around at the crowd of fans I would say it is almost split 50/50 and I bet if you randomly grabbed one of those women fans, they would know a hell of a lot about comics. Now Ivan didn’t write the description of these women to be insulting (well at least I hope he didn’t) he wrote it because that is obviously how he sees the comic book industry.

Yesterday at the con I decided to attend a Women in Comics Panel where gender equality in comics was brought up quite a bit. 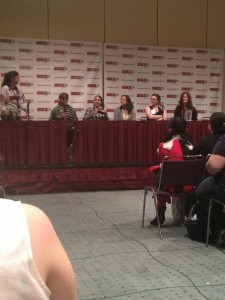 When I arrived at the room I was surprised there was a line up, something I was not expecting. The room was fairly large and was almost completely full. The panel consisted of 7 women including the likes of Becky Cloonan (The first female artist to draw Batman), Erin Amy Chu (Founder of Alpha Girl Comics), Ellie Pyle (Assistant Editor at Marvel), Sara Richard (My Little Pony artist), Louise Simonson (known for her work on countless Marvel and DC comics). The first question that was asked of these women was, “Should we still have Women In Comics panels?” The answer was unanimous across the board, although it is nice to have a Women In Comics Panel, they thought that having women on regular panels is enough, and that just because there is a Women In Comics panel, does not mean that organizers can then use that as an excuse to have the rest of their panels all male.

An audience member then asked about demographic change in comic book audiences. Like me, the panelists agreed that there are more women than ever reading comics. Back in the day a Women In Comics panel wouldn’t have pulled in so many fans. I was personally surprised to see so many males in the room. The industry needs to stop thinking of itself as a man’s world, there is nothing inherently male about comics, so why is it so hard to believe that a large part of it’s readership is female.

I had a great time at this panel, watching smart and talented women share their experiences and opinions about the seemingly male dominated industry. One message that came across loud and strong was if you want to see a specific type of character, be that a woman, someone who is gay, lesbian, bi or transgendered or a specific race, then get some people together and create a comic with this ideal character in mind. If there is something in comics that you don’t agree with speak up about it, or change it yourself.