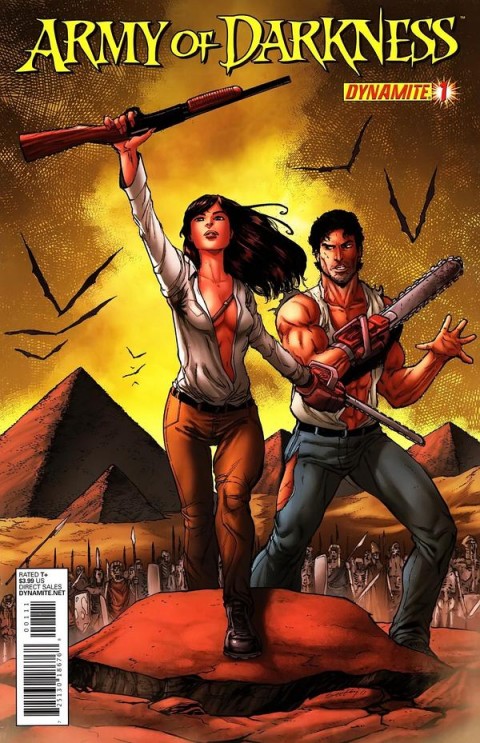 Ash Williams. Evil Dead. Bruce Campbell. If you’re into the classic horror movies directed by Sam Raimi, no doubt you treat the Evil Dead trilogy and Campbell with complete reverence, if only for their comically funny plots and horror based adventures through time. Dynamite Comics has continued Ash’s story in the past with several collections of stories, including Ash versus a number of classic horror figures such as Freddy and Jason. With their latest addition to the universe, Dynamite’s new Army of Darkness series takes fans back through time to follow the adventures of Ash once more.

Once upon a time there was a young man named Ash who attended a cabin with his friends for a getaway weekend, only to awaken a small army of zombies. After fending off their zombified attackers, Ash returns some time later to end the threat once and for all only to be sucked through time and transported to 1300 A.D. where he must search out the Necronomicon. Successful in his attempt to ward off the Deadites and Evil Ash, Ash is allowed to travel back home, only to find more monstrous threats waiting for him at S-Mart.

Trudging through the desert chained together as slaves, the narrator, Ash, tells their story of how they came to find themselves in the ancient time of Cleopatra’s rule. The scene gradually pulls back to reveal not a strapping male with a stump that allows him to interchange weaponry and fit it with an array of tools to kill the undead, but rather a young brunette female named Ashley who so happens to also have a stump for a hand. She recounts a date where her boyfriend carelessly travelled down into a crater and was infected by a mystical orb which transformed him into a ghoul. Hitting him with a solid punch, her life was forever changed, left with a stump which can magically transform into any form desired. Believed to be a sorceress, Ash gains audience with Cleopatra, who listens to Ash’s story and grants her standing among her court’s mystics after demonstrating her capabilities. Upon hearing a knock at the door, Cleopatra stands up to greet the visitor. A deliveryman hands her a package, and as Cleopatra opens the box a poisonous snake leaps at her jugular and sinks its poisonous bite into her neck. Quickly succumbing to her wounds, Ash berates the deliveryman, quickly discovering him to be a bug creature from her past. Cleopatra’s guards investigate the commotion after hearing their Queen’s screams, forcing Ash and her friend to scamper for their lives. They exit the palace and run out into the desert towards the ancient pyramids. After gaining access, the duo moves deeper and deeper into the pyramid while a mysterious figure looks on from afar. Ash and the bug enter a room housing a sarcophagus. Beyond the casket, Ash notices an image of a large, fearless fellow named Ash fighting the undead. In her zealousness, female Ash runs through the portal, leaving her bug-like companion to fend for himself, while the mysterious, cloaked figure peers over the images of both Ashes and says, “it begins.”

Although it’s clear the character fans of the Evil Dead franchise are familiar with does appear in the series, I felt like this opening issue was lacking in depth and I felt complete disinterest in the female Ash’s story and background. Coming into the issue expecting to see Bruce Campbell’s visage, Serrano’s story doesn’t “wow” from the opening pages. What it does instead is slowly reveal the identity of the narrator, which until the bottom of the first page can be presumed is Ash from the movies; we quickly learn as readers that this is false. What ensues is a tale which chronicles the female’s Ash’s history as far as how she came to be in ancient Egypt and in the presence of Cleopatra. As a fan of the films, I can’t help but notice a deficiency in its horror based elements, resting itself upon introducing a new character while injecting a measure of mystery concerning the destinies of Ash and Ash. The opening issue was weak, but has laid down the foundation for future stories which should at least be given a chance if you’re a longtime fan of the principal character.

Mychaels, Ivy and Belluco provided some solid artwork with the series’ debut issue, managing to concoct a range of creative, detailed environments capturing the breadth of the parched desert, and the darkness of Egypt’s pyramids. I liked the darker pages featuring the mysteriously cloaked figure hidden deep in a darkened cave as well, complemented by a number of pools following the movements of Ash and her bug-like companion. This issue really shines when Ash’s hand changes shape into a weapon of her choosing, altering a panel at a time until gradually its new shape dominates the panel. There were some great instances where Ash cleaves a ghoul in half using a giant axe, while decapitating the head of another. The artwork was great for what it was and fits well with the story and the standard set by the films.

I was disappointed by the absence of the classic Ash throughout the issue, while the opening page itself teases the reader as to the narrator’s identity until the female Ash is revealed. With her as the focus, the series stumbles with its opening issue, fumbling about her back-story without really delving into the meat of the plot or giving first-time readers something to grasp and interest them. Fans of the films and more recent comic books should give this new installment to the lore a chance to thrive, but there’s no reason for new readers to latch on to this book. It does have its moments and has more than enough to satisfy Evil Dead fans, however the story is otherwise uninteresting after one issue.