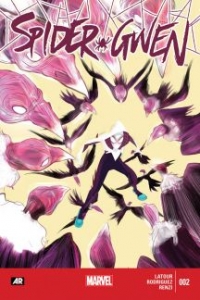 As a waiter, you get used to the occasional unhappy customer. It happens. The longevity of your food service career is determined by just how ‘occasionally’ it happens.

But it’s unavoidable. Every so often you get a disgruntled patron who is not happy with the service I provide and ironically -in my case- it’s the patrons I tried my hardest to gruntle.

I write these words now to be completely open, honest and transparent, because a lot of you are going to fall under the ‘Disgruntled’ designation with my efforts today.

Before you send your order back, or ask to see the chef, let me tell you a little story…about Teflon. 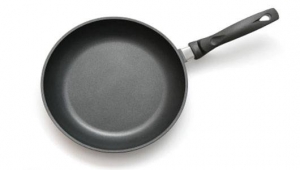 In 1938, Dr. Roy Plunkett was trying to find a refrigerant that wouldn’t kill people. He and his team came up with a gas called tetrafluoroethylene, which –Thank God– they nicknamed TFE.

They whipped up about a hundred pounds of this stuff and stored it in cylinders.

The next day, they opened the valve on one of the cylinders and PFFFT. Nothing. But it still felt full. They cut it open and found it was full of a funky-feeling resin.

This resin was incredibly slippery and for all intents and purposes, wouldn’t melt.

They named the resin Teflon, slapped it on a bajillion pieces of cookware, and BINGO-BANGO-BONGO, your after-school dishwashing chore became a hell of a lot easier.

No matter what revisionist history gets pounded down your throat, make no mistake about it: Spider-Gwen was the four-color equivalent of Teflon.

Gwen Stacy was a part of comic book history for what she did in 1973: She died. I mean for realsies dead. Like Forever Dead. 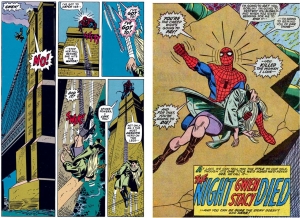 Well, 40 years, which in comics is Forever.

Then ‘Edge of the Spider-Verse #2’ came along (see, I told you, there’s something special about those #2’s) and one of the stories was set in an alternate universe where Gwen didn’t die. Instead, she got bitten by a radioactive spider and was granted Great Power. And with Great Power Comes–

(Nope. Can’t do it. Can’t perpetuate the biggest over-used cliche since Ms. Gale opined to a dog that gave its name to an ‘80s rock band, that they were no longer geographically located in the Sunflower State.) 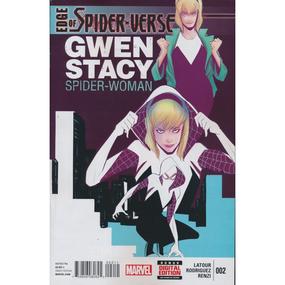 Sales of Edge #2 went through the roof. Anything with the new Spider-Woman flew directly from the spinner racks into bags and boxes in the basements of Moms and Dads across America.  From their Mount Olympus at 135 W. 50th Street, NYC, the Marvel Pantheon looked down and decreed: “We gotta get more funny books with this Spider-Glenn guy! And get the Lunch Box Division on the line!”

Was it just the costume? No, of course not.

It was the hyper-kinetic artistic presentation, the hairstyles, the color pallette… and that remarkable costume. Robbi Rodriquez is one of the most exciting, compelling, and creative artists in comics today and Spidey-Gwen’s work togs are spectacular. 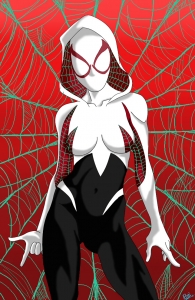 The last time I can remember a book taking off like that due to its visual was Giant-Sized X-Men #1 in 1975. Len Wein was a fantastic writer, but the new uniforms, the new looks… all that came from the amazingly talented, and amazingly under-appreciated Dave Cockrum. Trust me, Mr. Rodriguez, I am placing you in rarified air.

Jason Latour’s writing is a few notches above ‘workman-like’. He writes good dialogue and he has about a .705 Slugging Percentage in Thwip-Quips. Thwip-Quips are those funny lines Spider-Man tosses out in the midst of battle. Tossed out in that admirable way Spidey does when most of us would be looking for a place to change our underwear.

But conversely, that is Spider-Gwen’s greatest weakness.

Gwen tosses out the Thwip-Quips, is tormented by J. Jonah Jameson, struggles with personal problems…just like the Peter Parker version of Web-Head.

Why tell the same stories with the same basic dynamics and characters with only the swapping of an X chromosome and a Y chromosome?

Actually, there’s mucho chromosome-swapping going on. (See the feminized Captain America and Bucky, etc). This just looks like the transparent move of switching the genders of popular characters to attract female readers. That really doesn’t bother me, but at least have the decency to create new characters, different characters.  You have templates on how to do it, Marvel. More Jane-Thors please.

This book should be more than just a gender-switch of a beloved character.

Why tell the same stories.

And didn’t we just have a Massive Event to defuse all this alternate universe horse-crap?

Don’t get me started.

I give ‘Spider-Gwen  #2’ two orders of onion rings.

You Want 2nds? Chewing on Chewie