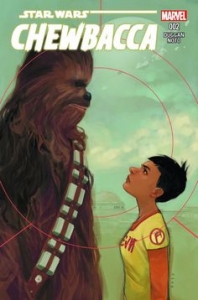 What’s not to love about Chewbacca? 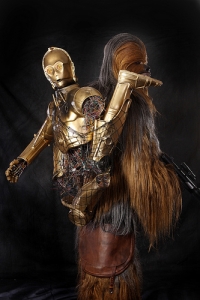 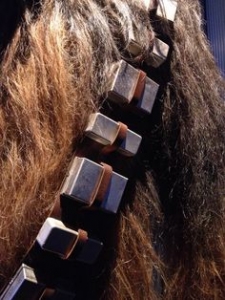 2. He Has the Best Accessories- What’s in that cool bandolier he wears? Ammo? Have you ever seen him re-load? Me neither. My theory? The big rectangles are his smokes. The small ones his lighters. Or maybe flasks and shot-glasses. 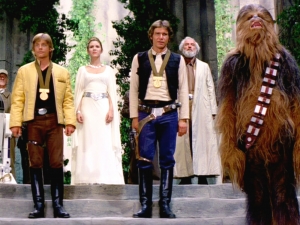 3. He’s Not Afraid to Express His Displeasure-  When Han gives him crap, he gives it right back. And if you spoke Wookie (like I do), you’d know that the last dialogue in “Star Wars: A New Hope” is Chewbacca yelling out: “Where’s my friggin’ medal?!” 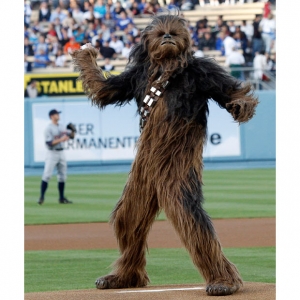 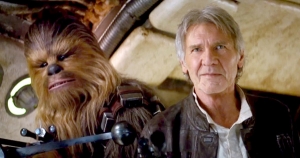 5. He Honors His Debts– At 8’, he could be making millions of millions in the NBA, but no, he faithfully stays by Han’s side to fulfill a “life debt” incurred when Han saved him back in his days as an Imperial officer (According to the Star Wars novel “The Hutt Gambit”)

“Star Wars: The Force Awakens” director J.J. Abrams (and the brass at Disney) have already said most of the Expanded Universe are not canon, so I’m not sure we can trust the stuff from the novels.

Which leads me to Marvel’s “Chewbacca #2”.

As comic book fan’s we are kind of ‘canon crazy’. I count myself in that group. I think canon gives stories resonance (Spoiler Alert: These are stories). Let me call upon my days in the ‘Thea-tah” to explain.

In well-written plays, the characters change over the course of the story. Sometimes in large ways, sometimes in small. But there is always something that happens to the characters to make them different from the way they were when the play started.

Back in the 1960’s Stan, and Jack, and Larry, and Steve and the whole crew at Marvel realized they could set themselves apart from the Distinguished Competition, by having their characters…change. These changes led to continuity and eventually canon. When Reed and Sue finally got married…it was huge!  And it impacted the Marvel Universe forever.

Of course, that philosophy eventually made its way over to DC and the rest of the industry. It also led to the need for occasional reboots (like both Marvel and DC recently went through) because the Universe gets too complex and greatly diminishes story-telling ability.

So what does writer Gerry Duggan immediately do? He sets the Chewbacca series outside canon, by making it a solo mission for Chewie that has nothing to do with the Rebellion or Imperial Forces. This way we can enjoy what happens without having to worry about complications like..Does it matter? (Again…stories)

“Chewbacca #2” is an enjoyable cowboy story.  Chewie rolls into town. Gets involved with some embattled miners. Guns people down with his bowcaster. All without say much of anything.

Basically, he’s a hairy “Man With No Name”.

Chewbacca is not the protagonist of the story. The protagonist –by definition– is the character that carries most of the action. In this case, it’s a young woman named Zarro. Zarro is a life-saver for Duggan, because it keeps him and editor Jordan Hunt from having to do the unthinkable, which would have been translating Chewbacca’s grunts and trills and roars (with a caption box at the bottom that says “*Translated from Wookie – Jubilant Jordan”)

As usual Phil Noto does an amazing job. Let’s face it, when a guy can draw a roomful of wookies and make them all distinct and different, he’s pretty darned good. I have a couple of quibbles about panel progression because there were a couple of times when it became difficult to follow the action, especially with panels populated only by Wookies. No dialogue, remember? But they are very very small quibbles. Almost quiblets.

It is worth adding to your Pull List. It has that grandiose Star Wars feel to it, even though most of the action takes place in subterranean mines. But it’s big Good Vs. Evil stuff, with one of the requirements of the Lucas Universe: a really cool bad guy, Jaum.

Now, watch Abrams go and kill him off in the new movie just to make me look bad.

I give ‘Chewbacca  #2’ three Kath Hounds. Because Wookies find them delicious and nutritious.