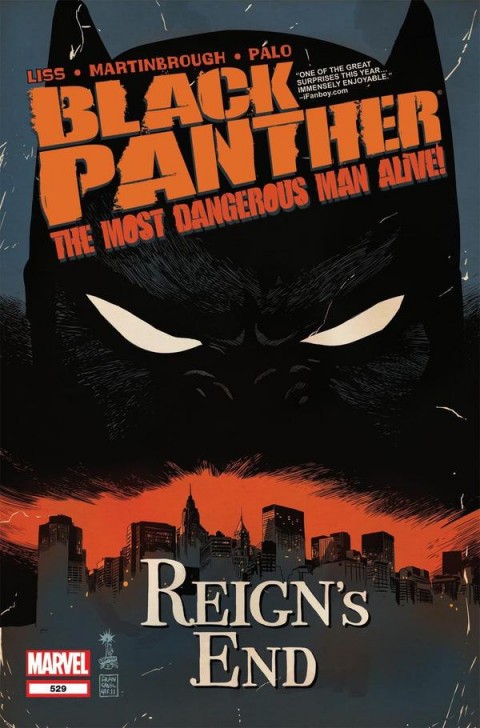 After 16 issues headlining the title formerly belonging to Daredevil, issue 529 0f the series marks the end of Black Panther’s prowling of the Hell’s Kitchen rooftops. With the final battle between Kingpin and T’Challa set, the Panther’s drive to protect his native land takes centre stage as Fisk prepares his final move on Wakanda.

After abdicating his Wakandan throne and leaving his homeland, T’Challa, without his powers and wealth, took to protecting the streets of Hell’s Kitchen to prove his self-worth in Daredevil’s absence. Upon his arrival, he found a new threat had risen in the wake of Shadowland with Wilson Fisk assuming control of the ninja death cult known as The Hand. Looking to expand his influence, Fisk attempted to extend his international reach through the exploitation of Wakanda’s fragile banking system. After a politically motivated attack on Wakanda, Panther, along with Luke Cage, Falcon and Sofja, make their final move to protect T’Challa’s homeland while ending the threat of the Kingpin.

In the heart of Shadowland, Panther, Luke Cage and Falcon go to toe to toe with Kingpin’s ninja assassins as they wage their assault on Wilson Fisk’s stronghold. Enraged, Kingpin orders one of his trusted confidants, Miyu, to delete sensitive information from a flash drive before turning to Lady Bullseye and Typhoid Mary and sending them to detain Falcon and Luke Cage. With everyone else inside Shadowland resorting to fisticuffs, two ninjas are alerted to unauthorized access to the stronghold’s mainframe. A group of ninjas quickly leap through one of the walls housing Shadowland’s computers  and attacks Miyu, whom after dispatching the three ninjas, reveals herself to be Shuri, T’Challa’s sister and current Black Panther. Elsewhere, Cage and Falcon gain the advantage on Typhoid Mary and Lady Bullseye with a little help from Shuri. Together they run off in search of T’Challa and Kingpin, following the thuds and crashes throughout the complex until they find the two fighting hand-to-hand across several rooms. Once T’Challa’s allies arrive, Kingpin’s ninjas emerge from the darkness to surround their master. Upon revealing Shuri’s role in T’Challa’s plan, Kingpin allows them to leave so as to avoid further ruin. One week later, T’Challa and Matt Murdock are standing atop a building in Hell’s Kitchen discussing recent events, briefing him before they part ways. Walking into his diner, he finds Sofija waiting for him. After a short chat, T’Challa runs off into the night in search of one thing before leaving town: trouble.

Counting myself among the detractors of this series from the first issue, I came back to the series with this final issue of the title. I was pleasantly surprised by how the book has shaped up since the last issues I read. It feels as though Liss surely, solidly found his footing in writing the character over the first year of the series culminating in an interesting take on the character which entrenches him as the preeminent tactician and strategist. I enjoyed this final issue, although the ending of it felt anti-climatic, which in a respect is what Liss was aiming for. The entire run has built towards this showdown between T’Challa and Wilson Fisk, and as with any ending an ultimate, definitive ending is typically expected. Yet, what Liss provided with his run was a slow brewing arc which ends with the heroes triumphantly leaving Shadowland on their own accord, while Kingpin must lick his egoist wounds after being outsmarted and tactically outclassed by a superior opponent. I also felt that including a short appearance by Matt Murdock was a solid bookend to T’Challa’s time in Hell’s Kitchen, bringing Liss’ story full circle. This issue altogether felt like a fitting “period” to the end of the series.

The artwork in the issue was strikingly good throughout, hitting its marks very nicely while providing very entertaining, mesmerizing  visuals. There are some solid pages in the beginning as T’Challa and his team infiltrate Shadowland where they fought through a horde of ninjas as they move towards the Kingpin, complemented by several pages of Fisk plotting with his closest aides deep within the fort’s walls; in the background the New York City skyline is beautifully drawn, complete with its night sky and lights shining from office buildings surrounding the ominous house that Murdock built. The atmosphere of the artwork is suitably dark to the story, complementing the aura of villainy that Fisk and The Hand commands. The fight scenes between Black Panther and Kingpin were expertly done as well, while the art’s grittiness is apparent throughout the issue in how the characters are drawn and how their environments are composed inside the panels. I really enjoyed this book’s art, which nicely complements an equally gritty story.

Not expecting to enjoy this final issue, having not been thrilled with the initial installments of Liss’ run, I was pleasantly surprised by how this book turned out with Black Panther headlining the title as the new protector of Hell’s Kitchen. I feel like the issue, as well as the latter half of Liss’ work, nicely tied together some loose threads I noted were dangling coming out of Shadowland in my initial review. Bringing everything back to Kingpin and making him the antagonistic focal point along with The Hand helps complete the story’s total arc, and fills the gaping hole for a suitable antithesis to T’Challa in the series. Looking at the title as a complete work, it feels like a solid read which was afforded a strong ending fitting to the T’Challa character. Despite not following the title consistently, I think it’s definitely something that’s worth reading collected as a trade.