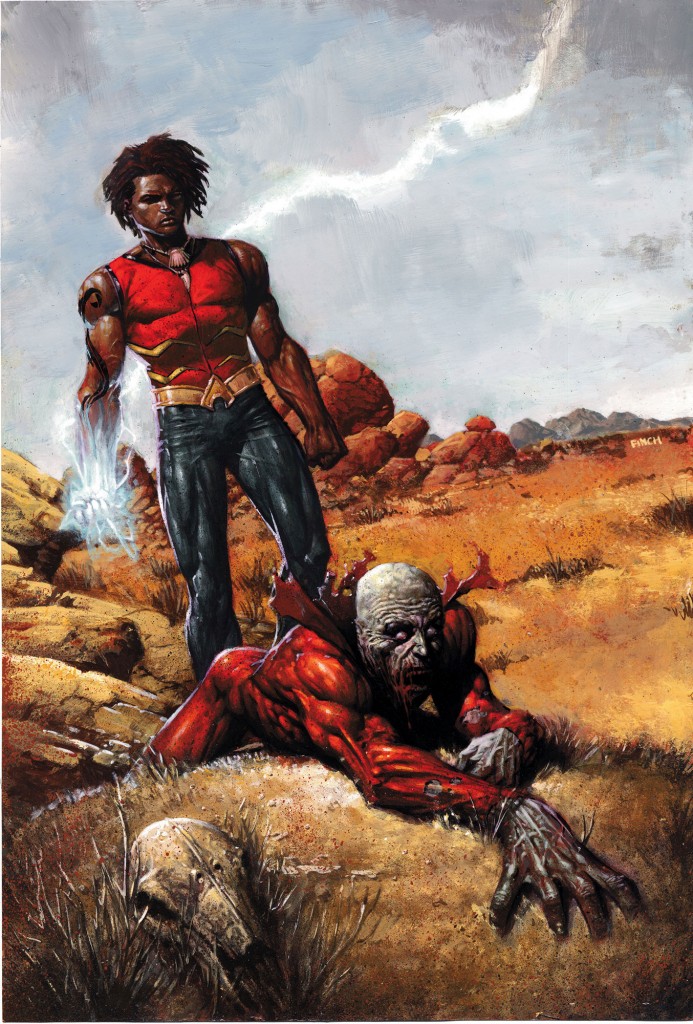 Change is an immutable part of life, and this issue is no different. What does the future hold for Firestorm and the mysterious young Jackson? Let’s take a look and find out!

In the wake of Blackest Night, 12 heroes and villains return from the grave. After expansively searching, it’s revealed that these individuals have a role to fulfill if the chosen one is to be found. Brightest Day follows these heroes as they grapple with their renewed purposes and the weight that walks parallel to their destinies.

Brightest Day continues to follow its most recent structural format, focusing on beginning and ending an issue with the same story and sandwiching the other stories between it. In this issue’s case, the focus shifts partially in its inclusion of Firestorm back into the story, complemented by the continuing focus on Jackson, the new Aqualad.

The issue begins with Jason and Ronnie merged together as Firestorm. They are in Professor Stein’s lab undergoing tests under Stein’s watchful eye. He asks them to transmute a football into a globe, but they have trouble changing it as black vapor strangely emits from their hands. Stein explains to the boys his understanding of the Firestorm matrix, and he believes that the powers are entering their final stage.

Stein tells them they are becoming more powerful than they can imagine, while simultaneously they’re becoming very unstable. He tells them that the Firestorm matrix is unstable. Stein then quickly explains to them the nature of his experiments involving the Big Bang, telling them about the actual spark that preceded existence; even more, that he captured it. Stein reveals to them that the matrix is the Big Bang, the trigger for starting and restarting the universe. Together, this makes Firestorm the most dangerous being in the universe.

On a somewhat lighter note, we return to Aquaman and Mera as they swim through the ocean. Aquaman leaves Mera in light of all the revelations Mera has told him in recent issues, telling her he needs some time alone.

Next we find Jackson and his adoptive father driving to the family’s cottage. Once there Jackson’s dad tells him how he came into their care, how a red haired woman

came ashore and left him under the protection of himself and his wife. It’s here Jackson finds out he’s not their son, something we’ve known as readers armed only with our intuition for some time. The conversation gets a little heated though when Black Manta arrives and attacks Jackson and his adoptive father. They quickly try to escape using the family truck, and his dad forces it off the road and into the ocean, knowing Jackson’s powers will keep him safe.

Black Manta investigates, but is blasted by Jackson who’s powers intensify the nearer he is to water. He wills the ocean to erupt around him, sending Black Manta flailing into the air. He recovers as Siren enters the scene, and they push forward nearer towards Jackson and his dad. Black Manta fires a dart directly at Jackson’s dad, which is caught by Aquaman as the last moment.

The issue concludes with a return to Firestorm, where Stein tells the boys that they have to stay at an emotional equilibrium, where the odds of triggering a new Big Bang are minimal, otherwise there’s a one in a hundred thousand chance they will trigger one and destroy all existence. That will only the two of them alive, along with the entity that’s been talking to them the entire time, Deathstorm(?).

This issue featured some fairly solid art from the contributors. I really am enjoying the Firestorm art, especially the elemental effects used for the flaming portion of the Firestorm costume design. It’s much better than the art in the previous Firestorm series featuring Jason as Firestorm, not to mention the Ronnie stories preceding it. The panel layout is much more clean-cut though, so there are not as many bleeding visuals into other panels, or cool effects like the bubble gum panels from several issues ago. Those were some of my favourite panels in previous issues, and it’s too bad that hasn’t been continued a little more. We get a taste of it in the final pages when Deathstorm emerges from Ronnie and Jason, where Deathstorm’s fingers reach out from their body and bleeds into the adjacent panels, but it’s a dynamic of the overall presentation that’s sorely missed.

The Aquaman art is still solid, and despite not being a huge fan of the story, along with the Deadman pieces are my favourite pieces of art in the book. There are some fantastic panels in this issue. There are also some creepy, haunting one’s. In both cases, Black Manta is a central figure in the art’s finer moments. There’s one scene where he creeps up on Jackson and his dad, which we only know because we can see the glowing red eyes of his element in the family truck’s rearview mirror. Another great contribution is the close-up of Manta and the cool red illuminating effect from his eyes that envelopes his body. I also liked the pages where we get a better feel for Jackson’s powers and what he’s going to be capable of. There was a great page where the waves erupt around him and crash into Black Manta, sending him flying backward.

Issue ten saw the return of Firestorm. After missing for several issues, we get a grander look at what we can expect as this particular story develops. I feel like there’s at least some progress in this story, which I can’t say for the Aqauman portion.

I know this sounds like a broken record, but the entire problem with this story are its spoilers. As I pointed out in the last review, we’ve known Jackson was the new Aqualad for at least a couple of months. From the beginning it was pretty obvious that Black Manta is more than likely Jackson’s biological father in some capacity. There’s just no mystery to the story, and the one piece that is interesting and isn’t being talked about at the moment is the strain between Aquaman and Mera. With so much of the story obvious, it feels like the PR team at DC is trying so hard to hook those Aquaman readers, the one’s they know are out there and dying for some Aquatic content, that it’s being done detrimentally to the overall story they’re trying to tell. In contrast, every other story feels like its developing organically and moving forward at varying degrees. They’re at least interesting, whereas the Aquaman story isn’t working for me at this point.

The issue’s other focus point is Firestorm, and here we learn a little more about the state of his powers and how they’re evolving. I think that’s an interesting little twist to the character. We always knew Firestorm was a powerful character, but to liken the potential of those powers to that of a Big Bang? It’s certainly going to force the two to work together. I like what’s being done with the two, especially since it should encourage fans of both Ronnie and Jason to co-exist as united Firestorm fans more generally. I’m not quite sure how the reappearance Black Lantern Firestorm is going to figure into this. I guess they’ve gone with Deathstorm as a name for it? I originally figured that we wouldn’t see the Black Lanterns return physically, using it as more of a psychological theme each character has to grapple with throughout the series. With this development I’m not so sure.

Combined, the stories balance out the issue. It’s not a jaw-dropping issue by any means, but there’s some development in the stories. The predictability of the Aquaman story keeps it from truly being a good component of the larger story, while Firestorm’s portion of the story, although ridiculous with the inclusion of the Big Bang theory, is a functional twist that should force Ronnie, Jason and their fans to get along.