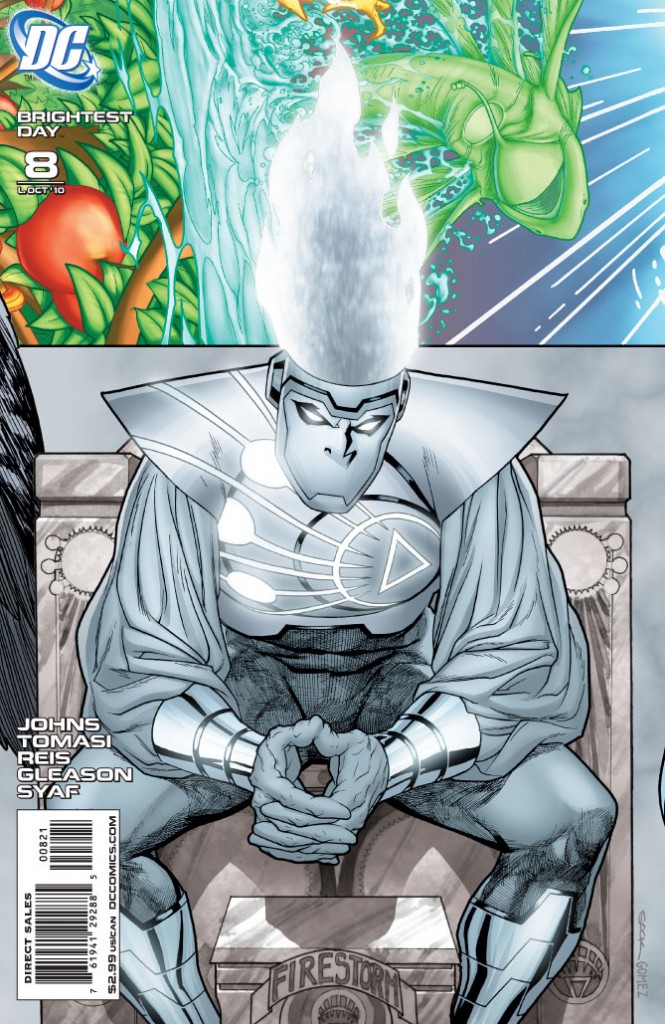 The days are certainly brighter in Johns and Tomasi’s bi-weekly maxi series. Now that the comic has finally picked up the pace in the last few issues, it feels like the book has finally found its legs. The question remains though whether the team can keep their momentum going after severely dragging their feet out of the gate.

In the wake of Blackest Night some of DC’s long dead characters both hero and villain alike return from the grave. Now given a second chance at life, Brightest Day follows Hawkgirl, Hawkman, Firestorm, Boston Brand, Aquaman and Martian Manhunter as they grapple with both the meaning of their returns, and the repercussions of them. 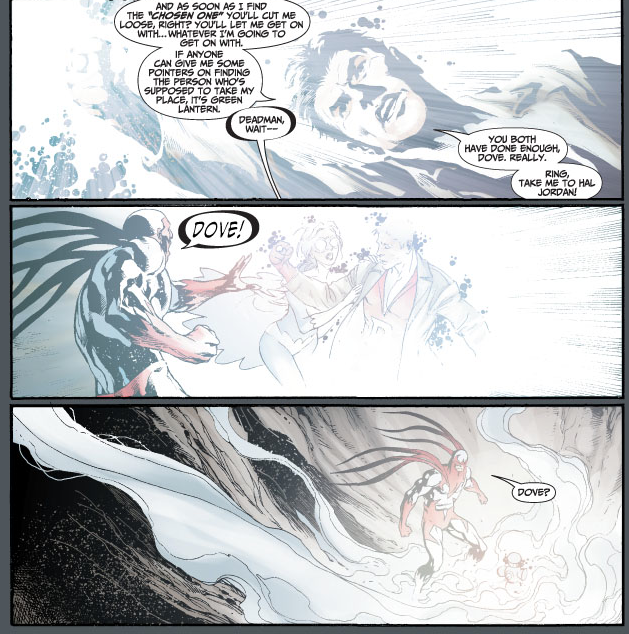 The issue starts off with Boston Brand, Hawk and Dove in Silver City, New Mexico. After the events of the last issue where these characters learned that cheeseburgers hold the secrets to all existence, we find them discussing the white lantern entity’s message to them. Brand quickly decides he needs to see Hal Jordan, one of the Green Lanterns of earth. Brand vanishes in a flash of light, but not before Dove grabs his arm. They both disappear, leaving Hawk standing there like a schmuck.

Next we’re taken to Martian Manhunter and M’Gann, who has now fully recovered from her wounds. She tells him about the other green martian, which he doesn’t fully believe until he’s read her thoughts and telepathically relived her experience against it. After every vivid image, J’onn comes to the startling conclusion that he’s not the only green martian on earth.

Meanwhile on Hawkworld, Hawkman receives a crash course in the world’s history. Here we learn that Hawkworld is an inter-dimensional bridge between earth and the planet Thanagar, and we learn about the long, bloody history of the planet’s inhabitants. The people of Hawkworld call out for Hawkman, who seems to be some sort of prophesized messiah. Embracing his warrior heritage, Hawkman tries to motivate the people around him, inspiring them to stand against their oppressors in the Nth city. He sees not an oppressed people however, rather an army.

While this is happening, Hawkgirl tries to break free from her captors. Free of her chains, she goes after her and Carter’s eternal nemesis, Hath-Set. With her back turned however, the Queen of Hawkworld smashes her with an object from behind. The Queen takes off her mask, revealing herself to be someone from Hawkgirl’s past. She falls unconscious after another strike, and we leave the hawks. Hath-Set ominously states that the Queen’s revelation opened old wounds, while they still have new one’s to inflict. Hawkman is shown walking through the underground caves with an army at his back.

In the final pages of the book, we return to Martian Manhunter. He and M’Gann stand in the middle of the Tanami desert telepathically scanning the globe for any anomalies. They sense a telepathic black hole near Star City, right in the middle of Green Arrow’s forest. 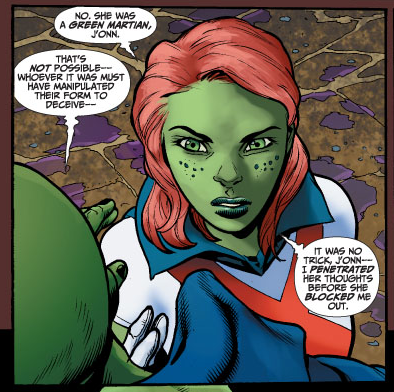 The Boston Brand art continues to be solid, as it’s remained from the outset. Reis’ work remains strong, and he’s really mastered the creation of elemental effects. Regardless of a contrast of light and dark, an aura around a character, or in this case, where Dove and Brand dematerialize and transport away in a flash of white light, it always looks great.

The Martian Manhunter art was a bit of step up compared to the previous issues with the character. I still have issues with the cartoony size of Martian Manhunter, who could almost be mistaken for the Hulk’s kid brother. For the most part the art is very plain and that’s kind of an endemic part of the colourist’s style. What I do like though are some of the effects they use. They are some pretty cool panels like the one where J’onn uses his telepathic abilities to read M’Gann’s mind. Using his ability to phase, he physically inserts his hand into her brain and relives her memories. What’s kind of neat here is we can clearly see his hand disappearing into her head as he phases it through bit by bit. We see the same effect on the following page where the other green martian did the same to M’Gann as she tried to kill her.

Finally, the Hawkworld pieces have started to grow on me. The art in these parts of the book have a lower attention to detail, but what it lacks in depth will be made up for in the gritty brutality of these pages and what’s forthcoming. I think this is going to be this artist’s strength as the series continues forward, primarily once the expected Hawkworld civil war picks up. This definitely is beginning to reflect the tone that story will be taking.

This was another solid issue for the Brightest Day team. The book has continued to follow a much more structured layout than in the earlier six issues, sticking with a basic sandwich approach for most of the last three issues. This issue slightly deviates from that blueprint, in that the book opens with Boston for a couple of pages before moving into the meat and potatoes of the issue, the Hawks and Martian Manhunter. The latter of those appear second, and then closes out the issue by flying over Green Arrow’s forest. Unlike previous times where a character’s story is left and revisited later in the issue (perhaps a few pages), Martian Manhunter’s revelation about the existence of another green martian is a natural emotional climax to leave on, compared to the abrupt shifts in stories from the earlier issues. 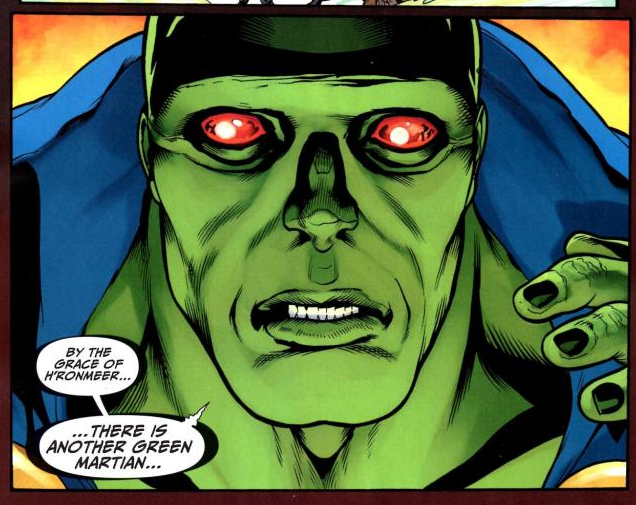 Another older problem is creeping in again though. We’ve not really seen Aquaman or Firestorm in the last two issues, a problem I’ve pointed to in how these year-long maxi-series tend to run. Having characters take these extended leaves from the book, such as Martian Manhunter’s earlier in the series and now Firestorm, ruins momentum for the characters. Again considering that all these characters have not been able to keep a stable readership for their eventually to-be-cancelled books, it’s harder to push those characters to the forefront when they’re absent for the better part of a month. It works vice-versa with the other characters. I’m still largely uninterested in the Martian Manhunter or Aquaman plots, although the Hawkman/Hawkgirl plot points are starting to pick up a little and have intrigued me a little more than the aforementioned stories. I still think the Brand story is the critical piece of the plot, but considering that the Brand character is given but a few pages at a time, I feel like this story is going to drag more than it should. It’s either that or it’s going to be the story that develops the quickest and presents continual payoffs for the readers.

The only other point of interest in the entire issue is the Brightest Day teaser image featuring Firestorm towards the end. It is a very simple image of him seemingly overloading the matrix. The image is accompanied by the words, “You mean together… we could destroy the universe?”

I feel like Brightest Day is starting to hit its stride, although I still have concerns about the book’s pacing and inclusion of too many characters into the grander story. Even still, the team have turned in another good issue, and it’s fair to say that the book has shown signs of life after a rocky start.