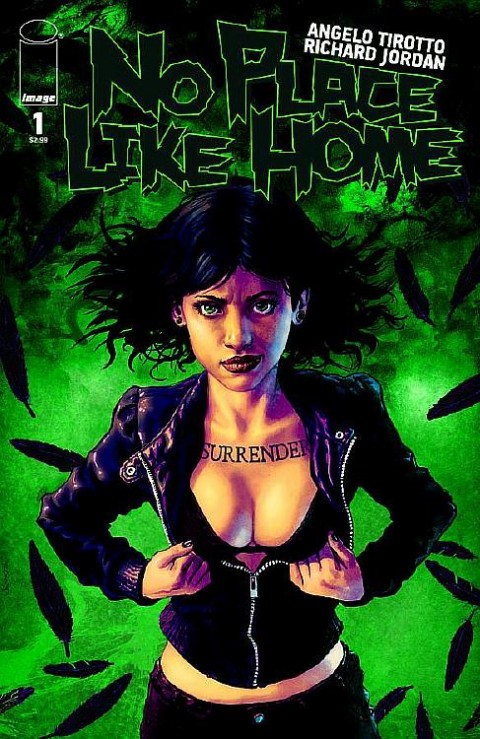 Dee has been living the life in Los Angeles for the last five years, working in a book store while working towards establishing herself as a writer in the City of Angels. She has to put her new life on hold though upon hearing about the death of her parents during a recent tornado.

Donald, Dee’s father, had been working on his farm’s field when he spotted a tornado on the verge of touching down. Running home as fast as his legs and lungs allowed him, he ushered his wife, Linda, into the house’s cellar. Seeking refuge inside, the storm doors blew open and Donald is sucked outside by the powerful winds while Linda can only watch in horror. Donald slowly managed to claw his way back into the cellar.  Now sitting on the ground, he and Linda look up to see a mysterious figure Donald seems to recognize; they’re promptly killed. A week later Dee arrives in Emeraldsville and is greeted by her longtime friend, Lizzie, who drives her home to meet her remaining family and friends at Twisters Diner. As they pull into town, they see emergency workers continuing their efforts to clean up the debris, but as they slow down the town drunk, Thomas, pokes his head inside Lizzie’s passenger side window and tells Dee to leave town before it’s too late. Continuing on, they arrive at the diner where she meets some old friends and reminisces with her niece, uncle and aunt. Later at the funeral, Dee wishes to open her parents’ caskets to properly say goodbye, but is stopped by the town sheriff who tells her the tornado wasn’t kind to them. As the service begins, Thomas slowly creeps in closer to the gathering, erupting in a loud outburst as he moves closer and demands the sheriff tell Dee what really happened to her parents. Thomas is subdued, arrested and taken off in the sheriff’s squad car. Later that day, Dee visits her aunt who had been sitting quietly talking with Sue. Sue leaves and tells Dee to drop by the diner for dinner later. Dee sits and chats with her aunt for a time, before leaving to see the Wizard of Oz at the drive-in theater with her friends. After the movie, they go to Twisters for a meal, but find Sue dead with Thomas apparently caught red-handed at the scene of the crime.

I felt Tirotto succeeded in establishing his characters and his comic book world with this first issue. Considering it is a first issue after all, Tirotto organically introduces his cast of characters in a way so fluid and natural it’s seamless. He does a remarkable job characterizing the relationships between the townsfolk of Emeraldsville, creating a close-knit tapestry of social relations between the small town community. It definitely has that feel too, both in how the characters converse with each other and what pop-culture references they make, such as the sheriff who constantly references Elvis Presley. Because much of the issue is used to establish the characters, it doesn’t provide much opportunity to broaden the plot, which is fine in this case. The heart of the mystery revolves around the latest tornado to hit the town which left the parents of Dee, the main character, dead. In this respect the plot point is very obviously being kept quiet by the townspeople; to what end is unclear save for the drunken ramblings of Thomas, the one character to adamantly vocalize their feelings about what really happened to Dee’s parents. There’s just enough intrigue here, guided by the cliffhanger ending showing Thomas crouching over Sue’s corpse, to rope readers in. This was an entertaining read, and although I had a hard time relating to the characters or caring about them just yet, I’m looking forward to what happens next in Tirotto’s small town mystery tale.

Although I’m not sure what Jordan was aiming for with how some of the characters were dressed, namely Dee and Lizzie, the art was beautifully executed. It was very rare to see a page where the characters had stoic expressions; the characters’ expressive natures helped push the story along and helped the reader get a feel for the personalities of the characters in question on a given page. The work ranges from dark and ominous in the opening pages during the twister, to light-hearted in the next series of panels as Dee meets Lizzie’s little dog, Terry. In between we find some touching work as Dee embraces her old friends and family, while the gruesomeness of the recent killings, both of Dee’s parents and Sue on the final page, add a hint of uneasiness of the town going forward. Consistent throughout the book was the presence of the crow, first appearing in the sky as Dee arrives home, and then again at a crime scene being investigated by the sheriff where each bird lays lifeless on the ground with their heads decapitated. I also felt the funeral for Dee’s parents was nicely put together, interjecting the grizzly scenes from her parents’ fate while pleading with the sheriff to let her see her parents’ bodies. I was very much pleased with the first issue’s artwork.

The book was very slow in its pacing, but functioned well as an introduction to Tirroto’s story. I enjoyed this issue despite not being too emotionally invested in the characters yet. As with any independent work, it’s hard to establish one’s story, to hit the ground running and be successful. While this may be a slow brewing series, I feel like its mystery elements will help encourage readers’ interest and continued readership. I think that altogether the book was a solid, establishing read which laid the foundation of what’s to come while peaking my interest with its gruesome murder mystery plot bordering on science fiction. I like the vibe of the book and look forward to the next issue.