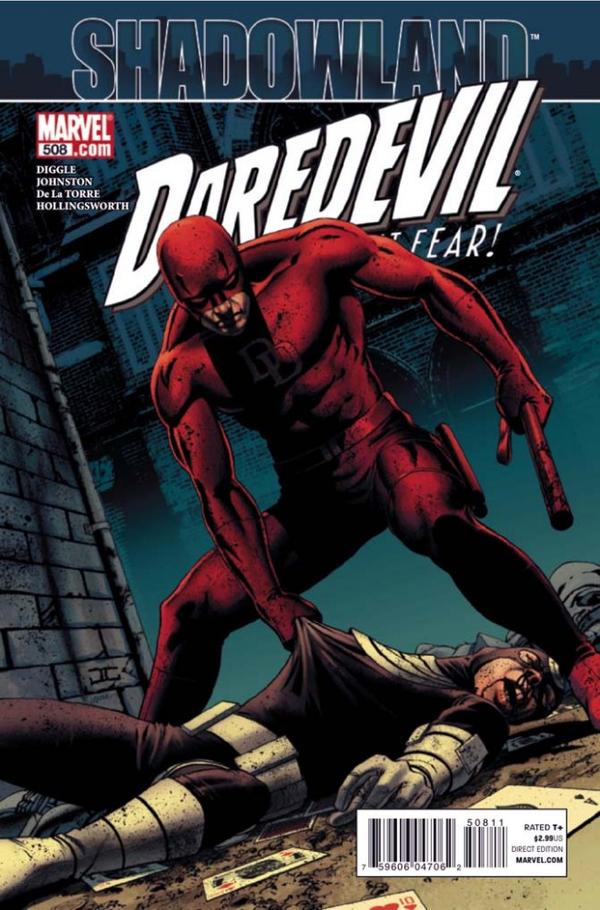 Shadowland has begun, and for the residents of Hell’s Kitchen and Marvel’s costumed heroes that can only mean one thing: either band together, or lose the soul of New York to darkness. Yet, after the events of Shadowland #1, is it already too late? With the murder of his longtime rival, has Matt Murdock damned the city in his attempts to save it. 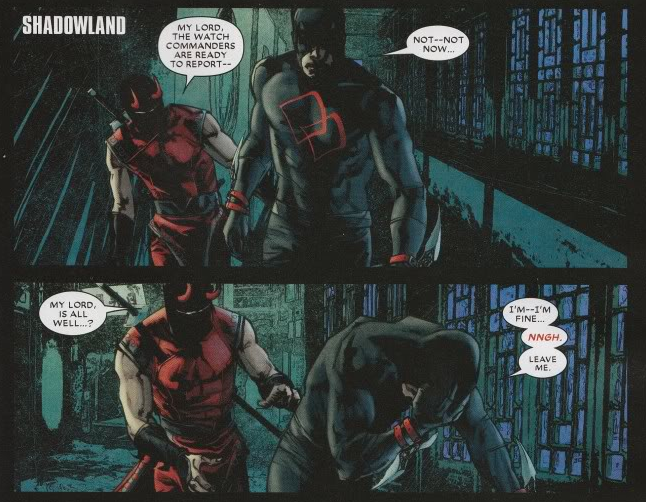 Occuring after the events of Shadowland #1, Daredevil #508 focuses on the aftermath of Matt Murdock’s murder of his rival. The issue focuses on how the lives of Hell’s Kitchen residents since Murdock built Shadowland have been affected. Throughout the book we first follow Murdock’s friends, Dakota, Foggy and Becky, a police detective who narrates his observations of the resident’s lives, anchored by scenes focusing on Daredevil and his lieutenants as they patrol the city and apprehend some thieves. Yet with The Hand’s plans seemingly in motion, an old friend appears poised to enter the fray.

In the aftermath of the first Shadowland issue, this issue directly follows it. In the opening panels Matt’s friends Foggy, Dakota and Becky stand in shock as they watch the police surveillance video of Daredevil’s cold blooded act. After deciding that they need to speak to Matt, they resolve to go to Shadowland and confront him. As they plan to talk some sense into their friend, Daredevil and his ninja stand atop the city’s rooftops, patrolling the streets of Hell’s Kitchen. White Tiger arrives and continues the charade of concern for Matt she portrays on the cabal’s behalf. She asks if he’s okay, which Matt dismisses, saying “There’s nothing to discuss.” As Matt leaves, White Tiger’s eyes glow that all too familiar red as she smirks from behind him.

Next the issue contrasts two different feelings. First we’re introduced to a middle aged police officer, who despite his wife’s wishes decides to go out and walk the streets of the Kitchen; he does this without his badge or gun, both which mark him as an enemy of the Hand. The officer explains what it means for him to be an officer, despite his melancholy about reassignment from Hell’s Kitchen’s precinct to another. The officer continues to add a human element to the story, echoing the fearful apprehensions of the Kitchen’s residents. In an interesting contrast, the next scene finds a group of thugs attacking an elderly man, where Daredevil and his ninjas attack the thugs, save the man, and apprehend the thieves. After a quick scuffle, the thieves are tied together, strung up over a street light, and branded both as thieves and by the Hand’s symbol; a red hand on their faces. They apparently spoke to talk to the Hand. 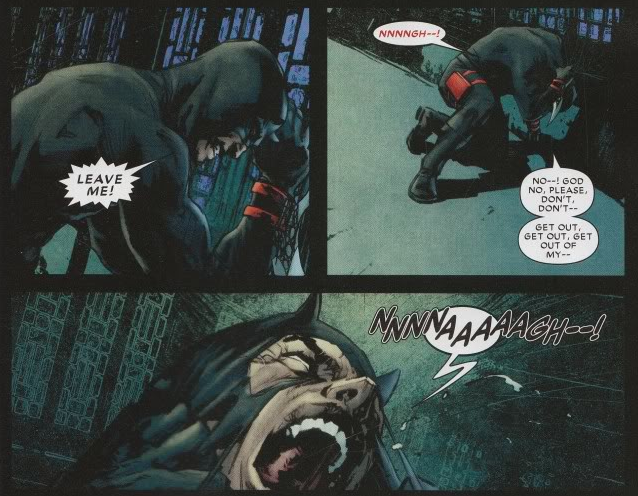 The final pages of the issue see Matt Murdock within Shadowland speaking to one of his ninjas about meeting with the watch commanders about their patrol reports. Suddenly Daredevil is overcome by something within his mind. It appears something has overtaken him, indicated by sudden shifts in text colour from red to black. We leave Murdock’s portion of the story with him simply proclaiming, “Yes.” The issue closes at the stronghold of the Chaste, the ancient enemies of the Hand. Daredevil’s latest sensei, Master Izo, is speaking to someone from Matt’s past. It’s someone who knows him all too well, and with the final page, it’s clear the yin to Matt’s yang and perhaps his greatest love has joined the fight to save his soul.

Roberto De Le Torre joins the Daredevil team this issue, teaming with Matt Hollingsworth to produce some great work. De Le Torre picks up the artistic duties from Marco Checchetto, and together with Hollingsworth turn in some fantastic visuals. The book maintains its darker tones amidst the night-time New York City landscape, well staying par with the grittier feel established throughout the recent Daredevil catalogue. Scenes such as Daredevil crouching atop a building with his back to the Shadowland structure, illuminated by the moonlight look really nice. There’s a nice blend between the nighttime sky’s darkness and Daredevil’s illuminated black costume contrasting against the skyline, moon and clouds. These rooftop scenes are beautifully painted, using darker blues to accentuate the night’s darkness against Daredevil’s costume. Altogether the art comes together to create a tone synonymous with that of the story’s plot. 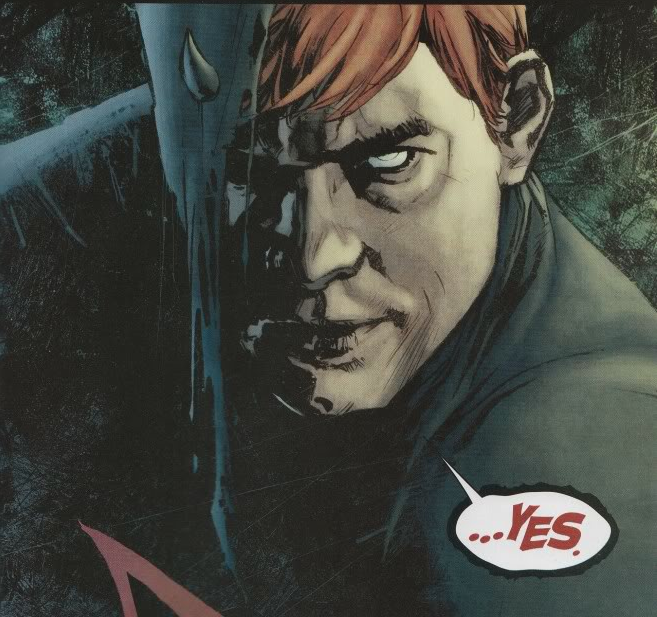 According to Andy Diggle, much of the Shadowland action will be taking place generally within the main mini-series, while Daredevil will primarily focus on looking at things from his perspective and how he interacts with his environment. The issue didn’t really accomplish that. It did introduce some new characters such as the police officer reassigned out of Hell’s Kitchen after the Hand’s takeover. This character provides an alternative view of how the Kitchen is reacting to Daredevil’s attack on crime, while also contrasting it against Daredevil and his ninjas stringing up some thieves before they can rob an elderly man. It feels like this is going to be the tone of the series, in that we’ll see characters, or perhaps citizens either taking to his actions or shunning them altogether.

The biggest plot points though occur towards the end of the book. First we see Matt appearing to breakdown mentally, as though he’s being attacked from within. I suspect this is the Hand’s influence intoxicating him, perhaps even the Beast or Snakeroot; whomever the Hand’s inner cabal serves. It seems as though Matt’s been taken over, which if that’s the case I don’t like the route their taking with him. It’s one thing to create an anti-hero and create a true grey area character, it’s another to have them be “possessed” and then later absolve of their wrongdoings by proclaiming they were under the influence at the time. I don’t agree with this decision if that’s what they’re going with, and I think it’s a mistake.

The final scenes bring an old acquaintance of Daredevil’s back into the fold. After reading the solicitations for the Shadowland tie-ins, the Elektra one-shot is billed as containing a key plot point for the larger Shadowland puzzle. It appears that Elektra is going to play a key role in this series as it relates to Murdock. The question is, does she side with him, or try to save him? The latter seems to be the case, and it would be fitting that Elektra be the one to do it.

The issue progressed the story a little more than Shadowland #1, which for the most part was lazily put together to set-up the huge plot device at the end. This issue is more evenly paced than the last, displaying some nice transitions between scenes, the transition between the police officer and Daredevil attacking the thugs as an example. Altogether the issue was a seamless read and didn’t feel rushed, but failed to really do what Diggle said the book would do. This is the only first Shadowland tie-in though, so it remains to be seen how Daredevil will be used in conjunction with the larger story. I feel like this is an essential piece though if you’re going to read Shadowland, providing the alternate dynamic to how the rest of the Marvel universe views Daredevil in the main plot threads of Shadowland.

Andrew Ardizzi is a student of journalism at Humber. He writes for the Humber Et Cetera. You can find him at his blog Come Gather ’round People Wherever You Roam. You can check out his review of the last issue of Daredevil before Shadowland beings right here.