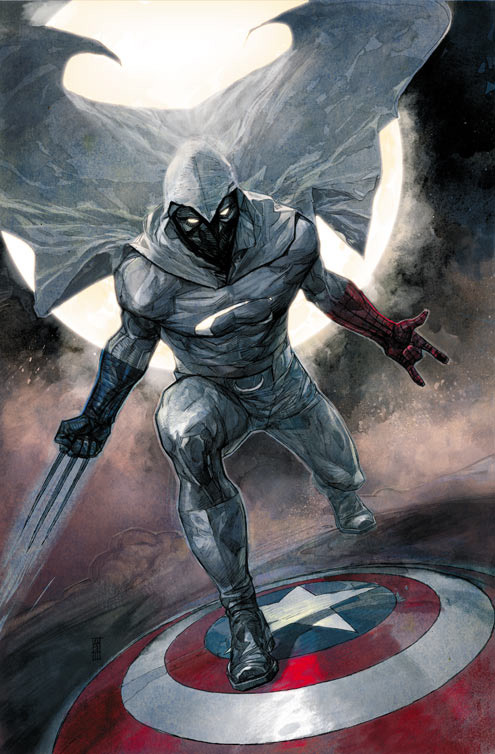 After briefly recounting Moon Knight’s history during  a TV pilot, we find the series’ muse Marc Spector has relocated to Los Angeles where he’s about to launch his new action series, “The Legend of Khonshu”, as an executive producer. Spector is pulled away from the party by members of the Avengers who pull him back into the super-heroic fray to scuttle the rise of a new local kingpin of crime. Spector leaps into action, staking out a boating dock while waiting for an arms deal to go down. Mr. Hyde appears from a boat and confronts two henchmen while asking for payment. Hyde attacks them, but is then attacked by Moon Knight. He manages to distract Hyde momentarily, giving himself enough time to board the boat to see what Hyde was offering as merchandise. Moon Knight finds an Ultron laid on a table and strapped down. He eventually escapes the boat with the Ultron, later taking it back to the Avengers where they ultimately decide together that if they’re going to take down this new threat and their potential army of Ultrons, they’ll need to assemble.

Maleev’s signature pencils, in both their positives and negatives are present in this debut issue. In the first few pages we’re offered a desert sequence loosely highlighting the origins of the man of the moon. I felt like these pages were not Maleev’s strongest in the issue. His strengths have traditionally been panels with darker tones and a grittier atmosphere; these pages clashed with much of the artwork and is negatively contrasted immediately once the Spector character is placed deep within Khonshu’s chambers. I also didn’t like how the Avengers characters used were all the same size and build, which is especially strange since Wolverine is drawn to be the same height as Moon Knight and not nearly as stocky as the character’s other depictions. Also, considering Bendis’ status in the lexicon of recent Avengers stories it’s unforgivable that Steve Rogers is wearing the classic Captain America costume (unless I’ve missed something). My only other concern is Moon Knight’s costume which feels less pronounced or defined than other artists’ portrayals. It looks almost as if Spector were wearing a white Daredevil costume.

The rest of the work was great, especially the dust-up between Moon Knight and Mr. Hyde which was put together well. I liked how he’s drawn using his crescent moons to gain the attention of Hyde, only to immediately follow it on the next page by leaping onto Hyde’s chest from a rooftop. I liked the entire exchange where Maleev draws Hyde grabbing a van by the bumper, Moon Knight’s immediate reaction, followed by his being hit by the van frame by frame until he sinks to the bottom of the waterfront before swimming back to the top. Another cool effect was Wilson’s colouring of any panel where a particularly aggressive action is taken by Moon Knight or Hyde; the tone of the colouring is red and yellow in these panels. It’s minor but breaks up the rest of the page and keeps it from becoming monotone in presentation. It accentuates the fight scenes and adds emphasis to them.

I came into this issue expecting very little concerning the quality of the content, regardless of Bendis’ involvement as writer. Although enjoyable, the tone of the previous two Moon Knight series inevitably fell flat as they wore on because they focused on the main character’s struggles with his own psyche; to kill or not to kill as it were. That became stale. Although it’s too early to say whether the formula Bendis is seemingly putting together after this issue will hold, it was an enjoyable read with an equal amount of intuitive violence and storytelling. It centred around a plot which removes Spector from the primary superhero haunt of New York city and into the oceans and sandy beaches of Los Angeles. It allows the character to have a fresh start while still maintaining the core qualities of what Moon Knight is, while also incorporating his budding ability to work on a team into the story dynamics. Where previous teams have tried to bank in on the character’s cult popularity unsuccessfully, I feel like Bendis and Maleev were able to work their magic on this debut issue.