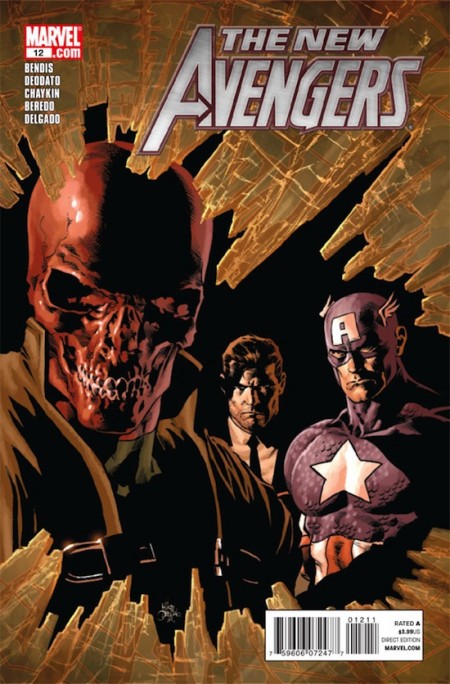 With an Avenger in the hospital and fighting for her life, issue twelve of New Avengers arrived on the stands last week. Let’s have a look at how this book is shaping up after a year’s worth of issues.

Luke Cage, Iron Fist, Ms. Marvel, Thing, Spider-Man, Wolverine, Dr. Strange, Mockingbird, Jessica Jones, Victoria Hand and Squirrel Girl; apart they are heroes, but together they are Avengers. Given the keys to Avengers mansion, this team of Avengers has been given free rein to protect the world as they see fit, but danger walks hand in hand with their line of duty. One of these heroes may pay the ultimate price…

Mockingbird lays all but lifeless in a Rhode Island hospital as doctors frantically work away with her life hanging in the balance. An angered Hawkeye watches on alongside his Avengers teammates where he learns they have a lead on Superia’s whereabouts.

In the distant past, Nick Fury’s team confronts a Captain America in the tunnels underneath Red Skull’s hideout. The faux Cap attacks the team, throwing his shield at Fury and later attacking another platoon member as he shoots him. Fury eventually gains the upper hand after smacking “Cap” with a rifle. Later, Fury’s team tracks down Red Skull outside Helsinborg Castle as he tries to make an escape. He is cornered by Victor Creed and to the dismay of Fury who had wanted Red Skull for questioning, Creed kills him.

In the present, The Avengers prepare to interrogate a member of H.A.M.M.E.R. while Iron Fist and Luke Cage exchange pleasantries with an uptight police Captain who doesn’t enjoy the Avengers moving in on his precinct. The woman in the interrogation room calmly asserts her allegiance until Wolverine arrives and begins to intimidate her. Meanwhile in Manhattan, Victoria Hand is attacked by Superia. By the end of the issue we’re left to wonder where Hand’s allegiance truly lays.

With two different story lines running in this issue, I suppose two artists were required. I just don’t see the reasoning though, and I feel this book didn’t need a secondary artist to pencil the flashback sequences of Fury’s team. Considering how good Deodato is, I would have preferred him to have done the entire work as opposed to Chaykin’s contributions. I’ve not been overly exposed to Chaykin’s work before outside the Guy Gardner mini-series Collateral Damage and a glancing look at his Punisher War Journal work. Neither really impressed me, and his work in this issue didn’t either concerning his characters. They look too cartoonish compared to Deodato’s work which balances the overall quality of artwork in the issue. Deodato’s work is altogether crisper and more realistic. Although I dislike Chaykin’s characters, I think his style lends itself to more action, notably the entire exchange between “Cap” and Nick Fury’s team. To this end it complements Deodato’s much more atmospheric and moody work and infuses the issue with more energy. I also liked his final contribution of Red Skull’s head floating in the water and it’s honestly one of my favourite pieces of work Chaykin has done from what I’ve seen. I disagree altogether with splitting the art duties and dislike Chaykin’s models, but Chaykin nicely complements Deodato’s work.

Despite not following the series extensively, I was able to step into the ongoing story and understand the summation of what’s gone on so far. At the same time though, the story feels dull. I found myself not caring about the flashback sequences of Nick Fury’s squad in Sweden as they chased down Red Skull. I continually entertained “so what” sentiments while reading these “breaks” in the greater story. For a new reader this was a particularly difficult issue to jump into. Its 50/50 story was not very well outlined in the introductory summary at the beginning of the issue which I feel is standard now if new readers are going to be able jump into a series based whether out of curiosity or through buzz. I was left not caring about half the issue, and that’s never a good sign.

What was interesting though was the other half of the story focusing on the Mockingbird attack and later Victoria Hand’s apparent betrayal of Steve Rogers’ faith in her and his Avengers initiative. When her initial inclusion was revealed at the end of Siege it was peculiar considering her allegiance to Norman Osborn. Presuming her colours haven’t changed, this marks a shift in the evident conflict between the Avengers and H.A.M.M.E.R. With Hand in a position to finally subvert Rogers, this story is setting the former H.A.M.M.E.R. agent into a position where she can take down Rogers’ entire operation if she chooses to, especially now with his trust in her back pocket. Despite being a suspect issue, there is something tangible here that’s worth following if you’re an Avengers fan.