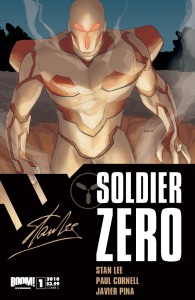 Let’s not mince words, or make any bones about it. If a new Stan Lee creation is being unveiled, it’s worth taking a look at. Soldier Zero is the first of three new books coming from the Poobahs at Boom! in association with Stan Lee’s Pow! Entertainment. Does the first’s pow lower the boom on readers and offer a great read? Let’s gander this bad boy.

Stewart Trautman was a soldier in the United States military serving in the Middle East, that is until his convoy drove over a mine on a roadside. The attack destroyed their vehicles and sent the convoy’s soldiers through the air. Stewart’s spine was broken at the base, leaving him paralyzed below the waist and confined to a wheelchair.

High above Earth, deep in space a being of great power does his or her best to avoid laser beams fired in their direction, darting in and out with little effort. Joined by a little robotic buddy, the being in a final effort to defeat his or her adversary, opens fire with everything they have access to.

On Earth, we find Stewart Trautman, former soldier, speaking with a grocery clerk about wheelchair access to the store. The clerk declines, leading a female wheelchair user to take drastic measures to get into the store. Stewart leaves the woman and the clerk. Stewart meets up with his brother, catching up as they move along the sidewalks. They recount what happened to him in Afghanistan, and then talk about a girl he’s seeing.

Back in space, the being makes a final effort to defeat his attacker, while on Earth Lily and her friend talk about Lily’s relationship with Stewart. Later that night at Caldon University, groups of people await a meteor shower on the roof. Standing on the roof, Lily meets up with Stewart and they get everything out in the open. Meanwhile a bright orange object moves closer to the earth; the being had lost his fight with his attacker. The conversation on the university rooftop continues until something crashes into the building, causing it severe structural damage. With every measure of strength in his body, Stewart prevents a wall from falling on top of himself and Lily. His strength wearing thin, the being reveals itself. Crawling slowly to Stewart, it starts to transfer its powers to him. With ease, Stewart thrusts the wall off himself and Lily and stands up. Picking her up, Stewart leaves and goes outside, hiding in the bushes to avoid drawing attention to himself. Noticing his brother among the crowd, he calls him over, and reveals the amazing thing that’s happened to him.

I’m not sure how to really describe the Soldier Zero suit, or the character concept for that matter. I suppose the best way to describe it would be as a sleeker version of an Iron Man suit. The character is even complemented by a Booster Gold styled, more futuristic version of Skeets.

The suit is white and red, while its extremities take on more of an alien form. Its feet seem very horse like, while the suit has three fingers on the left hand, while the right is more human. The suit appears to have rocket booster or jet propulsion technology on the back to help it travel. Overall the design is fairly basic, not offering anything groundbreaking. It looks pretty neat though. The interior art itself looks pretty nice. Pina and Rockefeller come together to present a nicely drawn and very colourful issue. The panel layout frequently disjoints at various points on the page, using it to highlight a flashback scene, or to look at an event from another perspective.

There were several other scenes, such as the flashback of how Stewart was injured which clearly differentiate from the main panel work by using black backgrounds and rounding the panel corners to create a different feel to the page layout. The art also takes a turn once the building collapses, and suddenly the bright. vibrant colours shift to a dustier, dirtier colouring to reflect the explosion’s aftermath. The way the downloading process is done is kind of strange; it’s difficult to hold judgement until we know more about the powers.

It’s hard to really give an over-arching perspective on the issue, but I suppose that’s why I’m paid the big bucks.

Considering this is a new creation, you have to take it as such and really give the book time to develop its foundation. With that said, the book jumps right into telling us the origin story of the man and his heroic efforts before christening him a superhero. The main character, Stewart Trautman, was a Captain in the United States military who was injured during his tour in Afghanistan. Left paralyzed from the waste down, Stewart readjusted to his life outside the military, and is now an astronomy lecturer at the fictional Caldon University. I felt the book characterized the two dynamics of perception felt between the disabled, and the on-looker. At one point Trautman is in the campus library and tries to reach a book from his chair. With it minutely out of his reach, one of his colleagues grabs it for him. In the panel, it’s clear Trautman is perfectly capable of getting the book, but the colleague smugly steps in to help him. It touches upon the reality some people with physical disabilities face, namely anyone who feels that smug compulsion or false sense of obligation to help a disabled person when THEY feel the person needs it. That sentiment is reflected in the following panel, where Trautman makes it clear he’s not helpless, and can do things on his own.

I’m not sure what to make of the character as a whole yet. It’s not clear what Soldier Zero’s purpose is, only that the “suit” can be transferred from one person to another, as we saw once Stewart downloaded the powers from the alien(?). The origin story itself feels like a mixture of several comic book creations, some created by Lee himself, and some less so. The suit is comparable to the Iron Man costume, only it’s based on alien technology as opposed to human science. I’d say the suit is almost too reminiscent to that character, if not for slight modifications to the suit’s design. The origin story functions like any other, explaining first who the man is, and then telling us how he got his powers. It’s explained pretty quickly, but clear enough that I understand his motivations and who he is.

This two-part origin can accurately be described as part Daredevil, part Green Lantern. In Soldier Zero, Stewart has an accident, suffers a disability and then moves forward and lives with that condition. Like Matt Murdock, he doesn’t let that stop him from leading a regular life-like anyone else. Where his powers are concerned, an alien crash lands on earth near him, and then has their powers downloaded to Stewart. I’m a little concerned about the similarities to those origins, feeling those are the striking similarities Soldier Zero will have to contend with and continuously be compared to. Because of that, I think the book is going to have a hard time standing up on its own merits. How well this book does in the long-term will depend on how the supporting cast develops around Stewart and what kind of issues the book tackles ranging from social to political, and what it does to differentiate itself. There is potential here, but it’s hard to say at this point.

This was a good first entry. It wasn’t mind blowing by any means, but was quite solid in how the story was told, how the characterizations developed, and offered glimpses into potential stories. The first of Stan Lee’s latest creations appears to have some potential, and this wasn’t even the one I was most interested in. It may have lacked 1960s styled Batman pows, booms, and biffs, but it looks promising.