Yeah, I know, about a month late.

I must admit, it was worth the wait. 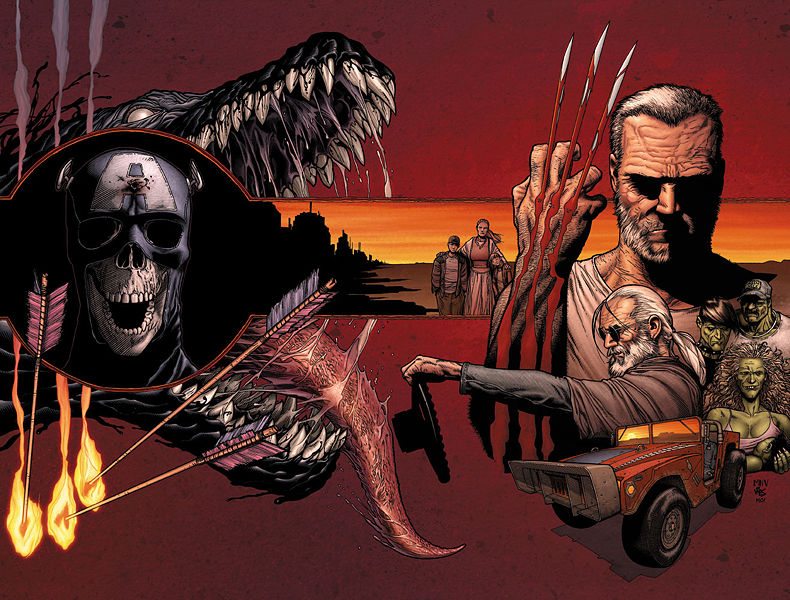 But regardless, I still stand by it.

Mark Millar is one of those writers who I either love his work or read it once and forget about it. Love his time on The Authority and The Ultimates, completely forgot the fact that he had written Ultimate X-Men, Ultimate Fantastic Four and Wolverine.

Steve McNiven on the other hand, I love. I loved his work on Cla$$war, I loved his work on Ultimate Galactus. What I’ve seen of Civil War is pretty good. Hell, I watched him in a sketch off at Fan Expo where he drew Two Face and it was awesome. So McNiven drawing Wolverine sounded great to me.

Now the popular comparison seems to be “It’s Wolverine meets Unforgiven” and it is a fair one. Old Man Logan shows us a future where the villains won after staging a mass assault against the heroes. The bad guys had strength in numbers (it’s even pointed out that there are at least five villains for every hero) and murder most of them.

Something happened to Wolverine, something so bad he vowed never to pop the claws again or to fight or to kill.

Then a blind Hawkeye shows up and wants Logan to help him bring something cross country. It is assumed to be drugs.

This trip allows Millar to bring out his best Grant Morrison. There are dinosaurs, venom dinosaurs, mole men, hillbilly hulks all of which are expertly drawn by McNiven.

And the story is told really well.

Don’t get me wrong, this is not Citizen Kane. But it’s a great action story. To keep in the movie theme, this is not a Micheal Bay movie, it’s a good John Carpenter film. Escape from New York comes to mind. Solid, simple story backed up by great visuals.

And it leaves such an awesome universe for later exploration. A simple comment The Red Skull makes really makes me curious what happened to Europe. It’s never shown, nothing specifically is mentioned, we just know it’s been hammered pretty bad. 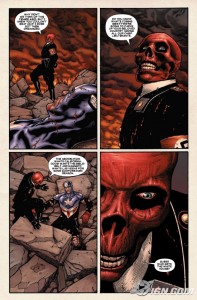 Not to mention Mark Millar manages to stick to his character’s guns. It’s a Wolverine story where for 50% of the book, Wolverine doesn’t punch, stab or kill people. Okay well Old Man Logan doesn’t, we do however get to see him murder a lot in flashback.

Speaking of which, McNiven draws a great Red Skull, can we get him on a Cap mini or one shot? During World War 2 maybe? Please?

McNiven is perfect for a book of this scale. He can draw dinosaurs. He can draw characters and his pacing and panels are great.

In terms of where it sits in the Wolverine pantheon… I like it as much if not better then Claremont/Miller mini series but not better then Barry Windsor Smith’s Weapon X.

So take it for what you will I guess. Great action story, one of the best Wolverine stories in the past few years. If you like Wolverine, I’d buy it.