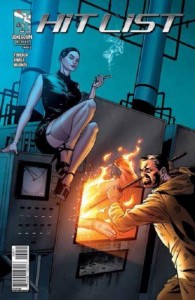 One thing’s for sure: It ain’t on our Kids’ Menu.

Look, I get it- you want to try something spicy, a little exotic. Maybe in the past you’ve tried similar dishes like “Kick Ass”, or ANYTHING by Howard Chaykin, and this has that same kind of, gritty, sexy, hard-core action movie look to it.

To be perfectly honest, that analogy works for me because this thing reads like a bunch of dudes at Zenoscope walked into a meeting and said: “Dudes! I just saw the Avengers! We gotta make a comic somebody will want to license and make into a movie! We’ll make a butt-load of money!”

You scoff? Have you been to Comicon lately? Half the people on the floor are movie studio wannabes, trolling the floor looking for comic book wannabes who put out stuff with the sole intent of attracting the attention of the aforementioned movie studio wannabes. You may find this tough to swallow but the comic industry is morphing into one giant pitch meeting.

If “Hit List” is a movie, it’s one of those ‘70s B-movies starring Michael Sarrazin or Frank Converse that only showed up in the third slot of a drive-in Triple Feature. It would reside at the bottom of a sputtering, flickering marquee directly under “The Sweet Ride” and “Faster, Pussycat, Kill, Kill”.

To be fair, perhaps I should give you a summary of the plot.

I would love to, if one existed.

The story is totally incomprehensible. Way too many characters, WAY too many subplots and it leaps from cliched scene to cliched scene with practically no transitions. That may be a good thing, because when they attempt a transition, it is ridiculous. There is a page where a little boy throws a football over the head of his father, and in the next panel a DIFFERENT football completes the arc, bouncing off the car of some other person..in a different part of town? In a different town altogether? Barsoom? Who knows? And THAT is the high-water mark!

To take the film analogy a bit further,  a “Hit List #2” movie would have an R rating for language… Maybe the violence,too, but trust your old buddy Raoul, the sex is most definitely James Bond PG-13. I realize this company makes a lot of money portraying Alice in Wonderland as a D-Cup, but girl-on-girl kisses and sex under the sheets ain’t exactly “Debbie Does Dallas”

The language would qualify, but even that is poorly used. You can’t think something is “Adult Dialogue” just because you drop an expletive into every word balloon. Instead, how about writing it so the characters actually talk like adults. You know, instead of trying to make each line sound like it’s a catch phrase? I know, I know, those studio wannabes LOVE that kind of crap.

The male side of things consists of a bunch of white supremacists who all look alike (despite numerous tattoos, piercings, and various styles of mohawks), a bunch of hunky action hero types who all look alike (varying somewhere between Ryan Reynolds and Robert Downey Jr –attention studio wannabes!), and two fat dudes with beards (although they could be the same fat dude with a beard, it’s impossible to discern.)

If this is a dish that you guys are interested in, why not just save your money for a couple of months and buy a Maxim? Same amount of money, and their pneumatic boobies actually exist in the real world.  And by “real”, of course, I mean surgically enhanced.

I give it ONE CRUMPLED STRAW WRAPPER