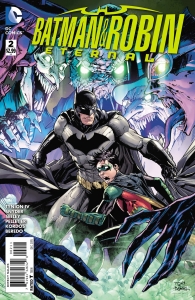 My good friend John stops in here for lunch every Tuesday for what he calls his ‘Insanity Buffer Buffet’. That happens to be the day before ‘New Comics Day’ at his shop Purple Earth Comics.

That happens to be the crazy-ass day when he shifts his entire stock one shelf rack to the right, manipulating the shop’s walls like a giant Rubik’s Cube, all the while dealing with a tsunami of customers screaming for the latest issue of ‘Saga’, demanding the limited edition Iron Man Mark 79 Armor statue, and burrowing through boxes hoping to find anything highlighting Harley Quinn’s cleavage.

He does this, remarkably, with no help. It could be, perhaps, with such an expansive stock and extensive clientele, there’s no room for another human being. Or it could be, he’s too…frugal to hire an employee. But I think that the most likely reason of all  is no other human brain could do what John does. He’s like a ninth-level Brainiac, using his Coluan noodle to remember where everything is located in his amazing shop. “The Harley bust with Harley’s bust? Two spots over. Second Shelf. Northwest Rack”.

So when he gives “zee leetle grey cells” a rest by breaking his fast here at Archie’s every Tuesday, a considerate waiter would leave him in peace to enjoy his Penne Rustica.

But, I’m more than his waiter. I’m his friend. so, I’m not considerate:

“When the hell is Batman coming back?”

You know what the Wharvey Gals  would say? “He ain’t bona fide. There ain’t a bonafide Caped Crusader in the bunch!”

To his credit, John patiently lowered his speared bite of pasta and told me: “Probably not until people get tired of it”

Speaking for myself: Mission Freakin’ Accomplished! Get his ass back here! 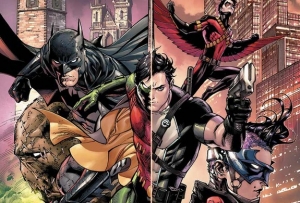 Even in ‘Batman and Robin: Eternal #2’, the ole Dark Knight is just a flashback. But I’m saying– It works…conditionally.

And the condition is this: It has to matter.

When it comes to to remodelling the DC Estate, James Tynion IV and Scott Snyder have taken on the task of renovating the Bat Wing, hopefully without Bat-Wing. This weekly project is starting in the Kids’ Room.

JT4 and Scottie-Sny are crafting a story that focuses on all the Batlings, and there’s a mess of them: Agent 37/Nightwing/ Dick Grayson, Red Robin, Red Hood, Bluebird, the Spoiler, Cassandra Cain…and that’s just two issues in.  It feels like a win-win scenario to me,because you are either sick unto death of all the post-pubescent crimefighters in Gotham and hope they are going to get wiped out, or you love them all and are praying that ‘B&R:E’ is going to put them into some kind of relevant order.

Admittedly, Snyder and Tynion are hitting readers over the head with the whole ‘“Family” thing, but if we’re being honest, the Batman Universe has always had a pretty hefty soupcon of  kin in the recipe. Even before a certain orphaned acrobat started bopping around stately Wayne Manor in his green satin hot-pants, the Batman Tapestry has been shot through with threads of family (Thomas and Martha W. ring a bell?)

There’s even a bad guy calling himself The Orphan.

Ow! That felt like something hitting me over the head!

But it needs to matter.

If this really is a re-ordering of the Bat Universe, it needs to become company-wide canon. That really hasn’t been par for the course at DC. Please, people, can we have a continuity that hangs around longer than “AfterMASH”? (Look it up)

If ‘Batman and Robin: Eternal’ is bona fide and good (I’ve already mentioned Batwing do I need to bring up Dark Shadows Batwoman?), then it needs to be on your Pull List.