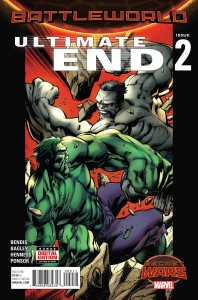 Now we are into Marvel’s Secret Wars. And once again, we’re slogging. Smaller pockets of different realities set to battle each other, with “the fate of Reality resting on the outcome.”

Meet the new slog. Same as the old slog.

Over all I haven’t been impressed with either DC’s or Marvel’s so-called “Big Events”. I think everybody is over-doing the Alternate Reality shtick. What was once a unique and special idea has become cliche and derivative. It has been overdone.

Not surprisingly, these alternate realities don’t feel…real. I actually think it has become a caveat for lazy storytelling. You can kill any character. You can destroy any planet. You can wipe out an entire cosmos. It doesn’t matter as long as you can pluck another version of that character/planet/cosmos from another plane of existence.

The hype for these Big Event books always stresses how important these books are. But, I’m sorry folks, they don’t feel all that important to me. It feels more like a cheap excuse for putting out First Issues for collectors to board and bag.

So, I have to admit that ‘Ultimate End 2’ is one of the exceptions that prove the rule. 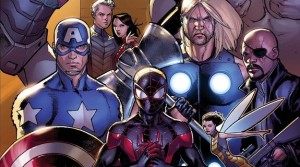 It’s ironic to me that the Ultimates line was the Genesis Planet for the popularity of alternate realities over the last decade. The Ultimate Universe was a great idea, taking characters we knew and loved and re-imagining them  –I mean really re-imagining them– in a more adult and realistic style. Characters had real flaws. Made real mistakes. Died real deaths. 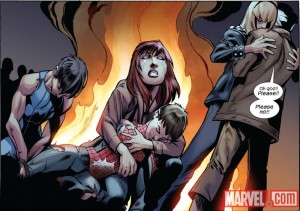 If you don’t think the Marvel movies owe more to Earth-1610 than Earth-616, you don’t know Shuma-Gorath from Shinola.

The irony? The destruction of the Ultimates Universe is one of the linchpins of Secret Wars.

That, combined with the writer, makes this that rule-proving exception. Ultimate End feels important. It has resonance for the reader. It’s not just an excuse for another “cool idea” (“Oh man! Guys! What if Ghost Rider…was a centaur!”).

And it’s Brian Michael Bendis, for God’s sake! The best comics writer working the beat! My three favorite scenes in UE2 are: 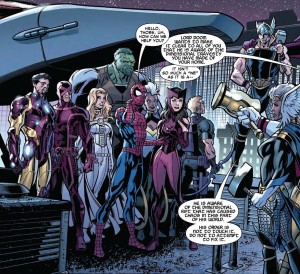 Bendis could write a story based on the minutes of the Albuquerque Jaycees meeting and make it compelling.

And the art from Mark Bagley and Drew Hennessy is a perfect fit.  It has that great balance between real and remarkable that was one of the defining visual elements of the Ultimate Universe. (I do have one question: Is Gwen Stacy’s hair made of some kind of new age transparent polymer? Why can I see her eyebrows through it?)

Another factor? Mark Paniccia. Editors don’t get nearly enough credit for what they do. Lately I’ve been throwing a lot of positive mojo his way.

Giving Bendis and Bagley the chance to say goodbye to a universe they mid-wifed into existence adds to that resonance.

I’m depending on you guys. If I have titles like Ultimate End to stand on, I might be able to keep my head above water on whichever “Uncanny Teenage Girl” title comes spinning out of Secret Wars.

I give Ultimate End 2 four Krispie Kreme Glazed, right after the red light comes on.