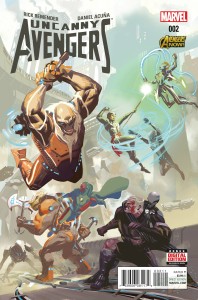 Oh thank God you’re okay Uncanny Avengers, I was worried sick about you!

There you were for like 30 issues, and then that whole unpleasant imbroglio with the Red Skull brain-jacking Professor X’s powers and turning into a giant Go-Bot and Onslaught-ing the living daylights out of everybody, and turning good guys bad and bad guys good, and time travelling to fix problems caused by…well, time travelling and alternate realities and people dying and then not being dead…

You know, the usual.

But when the dust settled (although it was probably ash from all the fires –tough break, Havok) , I looked around and what to my wondering eye should appear? But no Avengers Unity Squad, anywhere here.

Then last month, you came back to us.

And now we have Uncanny Avengers #2. A brand new Avengers Unity squad:

–Scarlet “Sorry About Wiping Everybody Out” Witch

It’s a very fresh and fascinating mix. Most of them are characters we don’t see a lot of with interesting personalities and viewpoints. I’m thinking: “This team could be awesome”.

It harkens back to the days when superheroes would come together, then go their separate ways in small groups, and come back together at the end to wage titanic battle with a mighty foe…usually another superhero group.

One big difference: Those old stories took place in one issue. That is not a feasible economic model in today’s new-fangled comic book industry. Just as much emphasis is placed on creating a series that will read well when it is collected in a much more expen– …well-packaged hardback or softback collection, something that used to be sold in bookstores (Today, you call those stores Wal-Mart).

At no time in UA2 is Avengers Unity unified. There are only scenes with individual members, except for a storyline with Scarlet Witch and Quicksilver, who are bound at the hip apparently, because they are brother and sister.

Fortunately, they are all really good scenes. Not a clunker in the bunch. Rick Remender doesn’t do clunkers. He is my favorite comic book writer in the biz.

Now really look at that statement. (Yes, I know, I should have spelled out ‘business’.)

I just made the statement that Remender is my rave fave. And he is.

His world-building is the very best. And it all starts with that. With that as a foundation, you can then populate that world with characters that are familiar, yet different, because –like all organisms– well-written characters are shaped by their environment. By starting this story arc on another planet, Remender can make the characters into what he wants, because they are in a brand new unfamiliar setting.

When was the last time you saw Vision acting like a Divorced dad dropping his kid off at soccer practice, or Rogue trussed up 1940’s Wonder Woman style getting drooled on by a creepazoid with a snot locker the size of an Acura?

Remender is one of those writers that is given plenty of leash by the Powers-That-Be. And he stretches that leash out like a doberman spotting a squirrel in the park. Unexpected things happen –Like someone punching a hole the size of a grapefruit through the belly of one of our heroes. When you read a Remender book, you find yourself muttering “Did that really happen?”

Do you realize how difficult that is? To consistently lay out stories that are jammed to the gills with twists and turns that make even jaded veteran comic readers think: Didn’t see that coming.

You just gotta trust Remender. Quit trying to suss out where things are going just so you can tell your pals at Heroclix Night that you figured this out, or that out.

Just go with it. 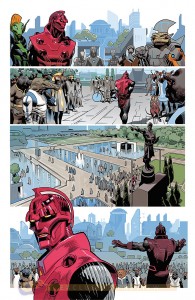 You want to savor Acuna’s art. Roll it around in your noggin for a bit before you consume it. Don’t rush through this book. You probably won’t be able to anyway. There’s no way to just give a cursory reading of the High Evolutionary’s dialogue in this story. Maybe they should start calling him the Really High Evolutionary.

It is only the second issue, so a lot of plot elements are still being established. It’s obvious that one of the driving mysteries will be how Pietro and Wanda will deal with the revelation that Magneto is NOT their real daddy. Will they have to get the truth out of their Nanny, Daisy the Cow? Will they turn to Jerry Springer for help? Will they find out they’re not really related?

For some reason, I find that even creepier than Giant Snot Locker guy.

This is a definite add to your pull list. All I ask folks: don’t wait too long to bring them together as a team. I really want to see these folks interact with each other. 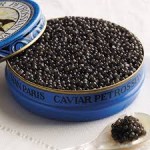 I give ‘Uncanny Avengers #2’ a heaping helping of Uncanned Caviar