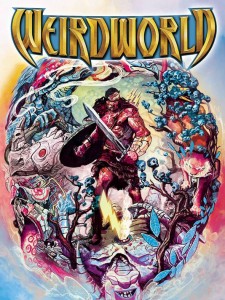 No, no, I’m serious. I am a great spineless worm.

When I found out about the Re-Genesis of the entire Marvel Line in a couple of months, I vowed to myself to not write about any Marvel #2’s until the second month of the new runs. What would be the point? Why suggest adding “Estrogen Avengers” to your pull list if the book isn’t even going to exist once September arrives? I was strong in my resolve. I was rock-solid, standing on my principles.

And then I read Weird World #2, dang it.

Weird World revolves around Arkon. You’re saying “A comic book about a City in Ohio? My, that is weird!” That’s Akron. Arkon is the ruler of the kingdom of Polemachus which has a totally different zip code from Akron because it’s in another dimension. 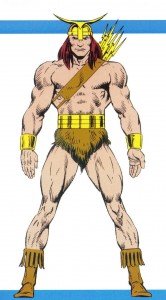 Arkon is sort of a combination of Kazar and Magic Mike, wearing only a tighty-whitey-sized loincloth and a great gold helmet that looks like the airfoil of a ‘69 Trans Am. He throws lightning bolts and rivals only Namor when it comes to macking on super-ladies (Scarlet Witch, Thundra.. what can I say? The guy likes women in spandex)

In Weird World, Arkon is in a… weird… world that he doesn’t know with only his weapons, and a map that looks like it was drawn on the back of a McDonald’s place mat by a six year old whacked out on Go-gurt. His quest is to get back to Polemachus but he’s hampered by just about every plant, animal and humanoid he encounters and by the fact that he has some kind of amnesia because he can’t remember things. Most importantly he doesn’t remember that his golden lightning bolts can instantly transport him anywhere he wants to go. If he did, Weird World would have only lasted three panels in Issue One:

–Panel One: Arkon stands in a murky swamp surrounded by giant reptilian bats. He scratches his head.

–Panel Two: Arkon grabs a golden bolt out of the quiver on his back and throws it to the ground in a blinding blast of light.

–Panel Three: Giant Reptilian bats stare incredulously with their beady little eyes at the empty spot where a second before had stood Arkon (Optional wisp of smoke)

But he doesn’t do that. Instead he slogs on, a Stranger in a Strange Land. I made that up. (Don’t look it up)

The visual are terrific. Every panel of Mike Del Mundo’s is a work of art. There are panels of Arkon slamming his head against a prison cell wall that I would hang in my living room. There is true flow to his drawing, which is fortunate since the lion’s share of this issue takes place underwater…with amphibian apes.

Yes, I said amphibian apes! God love you, Jason Aaron! And dragons. And Ogres. Aaron writes wonderful characters, with a cleverness and humor that doesn’t telegraph itself. It’s organic. There’s no “Oh, Deadpool hasn’t made a wild and whacky remark in three panels. Better insert one here” kind of writing. It flows, just like Del Mundo’s renderings.

And the thing that sold me? The item that convinced me to break my self-imposed embargo of Marvel reviews until the reboot? 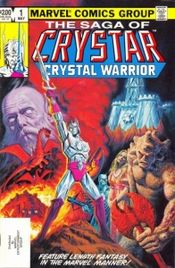 In the early 1980’s Marvel created a comic called “The Saga of Crystar”, in conjunction with a line of action figures by Remco.

They were great toys. With an awesome look and more points of articulation than most action figures of similar size. 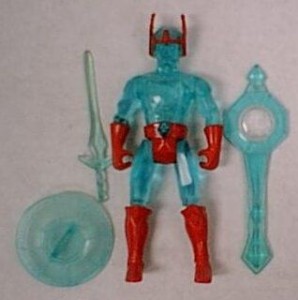 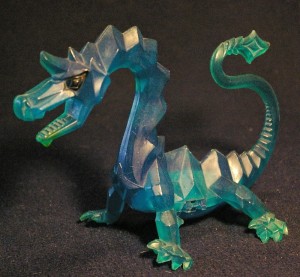 And fought bad guys made out of lava… 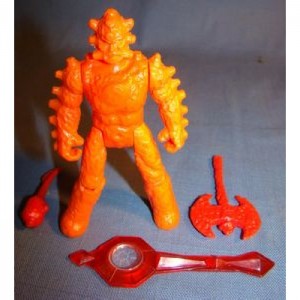 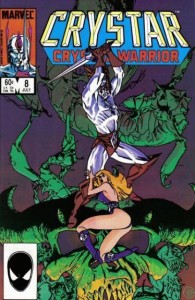 And when one of those Crystal Warriors pops up about halfway through WW#2, and not as some cheesy Easter egg thing, but an actual important part of the plot– 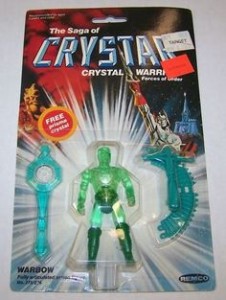 –It was the end of the embargo.

It’s that kind of wild, unpredictable…weird stuff that permeates this book.

And I love it.

At the end of Secret Wars, if this storyline vanishes, I am gonna lay a golden lightning bolt up the side of some Bullpenner’s head.