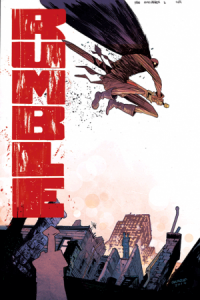 I have a table of regulars who call our Salsa ‘Red Ecstasy’. It’s understandable. We make it every day, with fresh, locally-grown ingredients. Some people come in, and get nothing but gigantic bowl of chips and “a vat of Red Ecstasy”.

I, on the other hand, think it tastes like Dawn Dishwashing Liquid.

It’s the cilantro. I think cilantro has an overpowering soapy flavor and I expect bubbles to shoot out of my ears every time I eat the stuff.

Apparently I am not alone, because every time I mention my disdain for cilantro, there’s always at least one person within earshot who pipes in with “Me, too man!”

The same leafy green ingredient that makes me feel like Ralphie munching on a bar of Lifebuoy, is the miracle component in ‘Red Ecstasy’.

As philosopher Sly Stone –of the Family Stone– once said: “Different Strokes For Different Folks”.

“Rumble #2” is cilantro. Some people are going to not get into it. Some people won’t be able to live without it.

Let’s be honest: You can say that about almost everything. As a matter of fact I am of the opinion that something can be too popular. If everybody liked something, did it really take chances? Was it innovative? Memorable? I like mashed potatoes, but I don’t remember the first time I ate them. I do, however remember the first time I ate conch ceviche (Dirty Dingus Dive Bar, Cozumel.) Loved it.

“Rumble” is not for every taste. The fact that I have sat here for 26 minutes in the head waiter’s office trying to think of a way to describe the story-line of Rumble is a marvelous indicator of how different it is. Terms like ‘urban fantasy’ spring to mind, but that is not original enough. 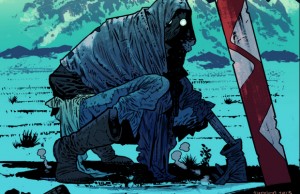 There is nothing derivative about Rumble. John Arcudi and James Herren are creating a whole new mythos here. I would have loved to have heard the pitch meeting at Image. Even Image promo quotes are woefully inadequate: You know those things I call ‘Preview-Speak’ –easily digested short promo lines like “And nothing will ever be the same!” or “The ____ to end all ___s” or “It’s like ____ meets ____”. They have to do that in Preview. But “It’s Louis C.K. meets Robert E. Howard in a David Fincher universe” doesn’t really get the job done. Although it’s obviously more than I can come up with.

It’s a beautiful comic. I don’t mean like Little Nemo beautiful, or Alex Ross covers beautiful. I mean it is a beautiful symbiosis of word and image. Arcudi and Herren list themselves as co-creators instead of writer/artist designations in “Rumble #2” and while that usually looks pretentious to me, it doesn’t here. This is a labor of love.

Attention! You with the Waiter’s Name Tag! This is the Cliché Police! Put down the order pad and come out with your hands up!

Let me rephrase that. Really terrific works of art (and this is a work of art), are created from love. A story, an image, a melody that just has to… get out, is the purest form of creativity. A work that doesn’t rely on whether or not it sells a million copies, or makes the cover of Bleeding Cool, or gets optioned for a movie, but just because the creators have something they want to create.

This is sequential art at its finest. There is a page that has a progression of three panels of the same window, where action is conducted, then three panels of a lumpy old lady moving the a dark hallway that is a terrific example of how comics work. It takes up all but one panel on the page. For crying out loud, you could got fifty Ultrons fighting fifty Avengers on that page! But more happens in the space how Arcudi and Herren use it than any Crisis/Axis/Secret War splash page.

Not everything is spelled out for you. The mysteries they present are not solved a page later. The characters are not hunky beefcakes or pneumatic super women. As a matter of fact, if it weren’t for one ancient language expert, I would say this is the butt-ugliest cast of characters ever seen in the four-color world. That’s one of the things that makes it beautiful. (If that statement makes any sense to you, immediately add this to your pull list) 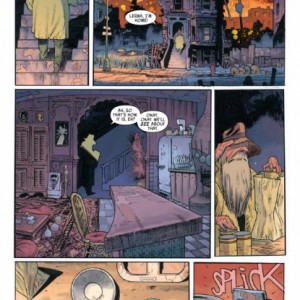 If you don’t want to be challenged, if you are looking for an easy piece of eye candy to unwind from the crappy day at work or school (and there’s not a damned thing wrong with that) this may not be your cup of cilantro.

For me, this is one of the best comics of an admittedly young 2015.

I give ‘Rumble #2’ Five servings of Conch Ceviche.