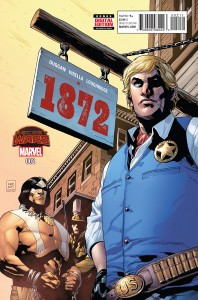 I had every intention of honoring my own Marvel Embargo. Really I did. My plan was to not give an opinion on any Marvel Book until the Great Revamp of Fall ‘15. Why? Waste of time. Why tell you to put something on your pull list, if the title isn’t even going to be there after the  GROF15?

And then this adorable little waif with golden curls and big blue eyes looked at me and said: “Pwease, Mistew Waoul. Pwease weview  ‘1872’ #2. Pwease?”

How could I refuse a request like that? Besides, there’s a two-drink minimum at the Tanga Lounge and I had just run out of singles, so I had to do something to keep her interested until her shift was over at 1am. (We’ve been dating for about two weeks so I am pretty sure the w-substitution thing is fake…I think)

Here’s the lowdown: 1872, is a re-imagining of the Marvel Universe set in the wild west. Steve Rogers is a lawman. Foggy Nelson is a judge. The Kingpin of Crime is..well, he’s a kingpin of crime, but in this case, crime is more along the lines of cattle rustling, claim jumping, and bush whacking.

I know, I know. “It’s ‘Battlegrounds’ stuff, Waoul — uh, Raoul. Every comic out there is a re-imagining of the Marvel Universe.”. You are exactly right, perceptive readers o’ mine. One big difference:

–This one feels real.

People die. Really, truly die. In the first issue, Bucky Barnes got sent to Boot Hill. For reals. He didn’t fall into a big crevasse and show up 70 years later with an aluminum-sided arm. He croaked. He joined the Choir In-vis-i-bull. He has ceased to be.

When people die in the town of Timely (You are a God, writer Gerry Duggan) they don’t vanish into the mis-t of a waterfall or get sucked into the Negative Zone. They get shot in the head and their brains splat on the shoes of the ladies standing too close.

Now, think about it for a second. This is not a small thing. Characters deaths –or lack thereof– define them in comics. 99.999% of the time in this beloved four-color universe of ours, death isn’t real..

It is in Timely.

Duggan’s dialogue is terrific. The words in the balloons of ‘1872’, are words unlike what you see in most comics. It is carefully chosen and character driven. Even the captions are great:

“In Timely, one became accustomed to stepping over one’s fellow man. I’d heard gossip that the undertaker had begun running out of pine.”

That’s craftsmanship, True Believers. That’s somebody taking time to choose the words, not just follow some predetermined formula (Exposition, followed by ironic remark, followed by bold exclamation, followed by wisecrack…Repeat). Duggan is special. I don’t know anything about him, but I hope his great grandfather Dum Dum shows up in Timely (I know it’s spelled differently. Throw me a bone here, people)

Nik Virella’s art is …the perfect choice for this book. She has managed to evoke feelings of Doug Wildey and Jean ‘Moebius’ Girard. I don’t toss those names around lightly. The western work of these two giants was beautiful and yet, rough and realistic. Don’t misunderstand. Her style is very much her own, but there are threads of energy, passion and honesty that are part of this American West tapestry that works ideally with Duggan’s words. 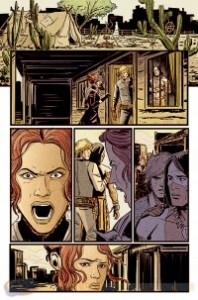 You are going to love how the creators portray these new versions of your favorite characters. They make more sense than most of the other Battlegrounds books. There is a logic to these characters. A lot of thought went into them, unlike other Secret Wars books which seem to have been created like Mad Libs:

“Ooh! I got it! Let’s take (Insert name of Beloved character) and change their (gender/race/creed) and then turn them into a (hero/villian) and make it as crazy as we want because none of it is going to stick anyway!”

Please, Marvel, Please let ‘1872’ stick. It is the best thing to come out of the whole Battlegrounds mishegoss.