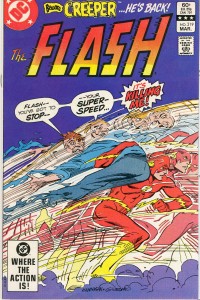 The Cover: Well, The Flash simply seems to be killing someone with his super-speed. How? I got no clue how the Flash is killing this guy, all I can see is that his clothes seem to be flying off. So maybe the Flash is killing him with friction and the heat is going to incinerate him. Or this guy has the urge to vomit and the speed is keeping it in his throat choking him to death. Man, I don’t know, I’m just going to take this guy’s word for it.

The Story: Our tale of speedy death begins with a recap of the last issue where the Flash and a brand new superhero on the scene called Captain Invincible are falling out of a building to their doom. Since the Flash is unconscious and their only chance of escaping the fall is on him, Captain Invincible begins pimp-slapping Flash to wake him up causing the hell up on the way down. Apparently his slapping is so dramatic that even the police mean on the ground can see him slapping the Flash around from the ground.

Quick side note: Captain Invincible?? Dude, slapping Captain/Mister/Admiral/Count in front of an adjective or a verb isn’t always the best way to make a superhero name. Then again, if they didn’t bother slapping the Captain in front and kept it Invincible, who knows if we would have Kirkman’s Invincible around today!

So when the Flash wakes up from his beating, he quickly uses his speed to save them from being splattered and whisks Captain Invincible off to a secluded area of the park Yup, nothing homoerotic about two men in tight spandex running off to an isolated area of the park to be alone. The Flash then expresses concern about the inexperience of Captain Invincible who reveals his identity as the Chief of Police and his source of powers being something called “cardio-power”. I am not kidding, this guy really gets his powers from cardio. After demonstrating his power, the Captain is told by Flash to stay out of his way for now while he solves the case of a missing woman that the Flash is romantically involved with.

We cut then to Fiona Webb the missing woman in question who is being held captive by the Eradicator (not the Superman one) who reveals his origins as a man who was loved by Fiona but was killed by mobsters who threw him onto a pile of radioactive plutonium. You know what should be standard operating procedure? Not throwing corpses of your enemies on radioactive stuff, as it always will come back to bite you on the ass. So this Eradicator crawls back out of the dirt brain dead knowing only to kill mobsters due to his subconscious. Meanwhile, the police captain receives a package from the Eradicator that is obviously a trap meant to lure the Flash in. Being the quick-witted superhero wannabe that he is, he leaps into action. As the Flash is running all over the city trying to find Fiona, the Guardians of the Universe are planning on having the Flash become the Green Lantern of Earth while Hal Jordan is off planet. Why the writers decided to throw this into the mix of an already convoluted story is beyond me. So having sprung the trap, Captain Invincible jumps in to fight Eradicator only to get stomped into the ground pretty quickly. As he is about to get disintegrated by him, The Flash stops by to use his super-speed to tear him out of his clothes and throw a pile of dirt into them to trick Eradicator into thinking he managed to hit him.

Not only did the Flash take him out to a secluded park at the start, this time he takes him to a secluded park with his clothes off! Flash races off to finish his fight with the Eradicator and then…the story ends with Tomar-re making his way to Earth. Wait what? You’re going to end a superhero story with him stripping the clothes off a fellow hero and not have him beat the villain in the end? Yeesh this issue was a stinker.

The rating: 1/10: This cover almost doesn’t play out at all in the story. Sure, we see the Flash pulling Captain Invincible out of the laser beam’s path causing him to not be in his clothes to fool the Eradicator. But at no point does Captain Invincible believe that the Flash’s super-speed is killing him. In fact, when the Flash grabs him, he doesn’t even destroy his clothing, he just undresses him at super-speed. Which I guess is a handy skill for the boudoir.