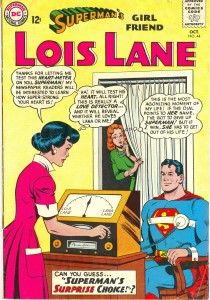 Not shown: the ruler

The Cover: Looks like we have Superman strapped to some kind of crazy love meter that will determine who he loves more; Lois Lane or Lana Lang. Of course, Superman doesn’t know that it’s a love meter and has been told that it’s a “heart-meter”. Totally crude joke, but how much you wanna bet that the love meter works by attaching a ruler to Superman’s junk and showing him pictures of Lana and Lois? *ba-doosh*!

The Story: Our tale of love opens up with Lana inviting Lois over to the TV studio to attend a party for a group of famous authors with the promise of handsome authors all waiting to sweep her off her feet. Lois thinks that Lana is just trying to get her to give up on her stalker like obsession with Superman but shows up anyways. But lo and behold! That hussy Lana’s true motives for having Lois attend was to show her up by having Superman show up and demonstrate the capabilities of a computer while she acts as an announcer. Oh but Lois Lane wasn’t going to take that sitting down! That ain’t how crazy Lois operates. After the show, Lois shows up at the professor who invented the computer’s lab to find Lana and immediately begins cat-fighting with her, hair pulling and all that sexy jazz. The fight is broken up with a bucket of water courtesy of the Professor who turns out to be Lana’s uncle who realizes that these girls are crazy and that he’ll build a love tester to determine the answer for once and for all. Lois then storms off to meet with her sister who gives her a contest application she filled out to win a car from the Daily Planet. Remember this, it will come into play later! 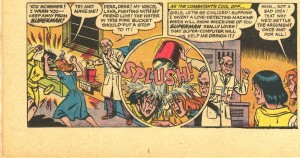 Check out that hair pulling action!

The next day, Lana and her uncle show up with the love tester disguised as a heart-meter after having proven it works by testing it on a famous actress. How they got a famous actress to show up with a bunch of crackpots in an elaborate plot to fool Superman is beyond anyone. Just to add to the insanity, Lana produces a signed contract for Lois that if she loses, she will immediately quit her job and exile herself to another country. Really? Are these women to spiteful and nuts that they will drive their rival in love out of their existence all over a man? Superman shows up and they attach the machine to him to begin the testing. After the machine sputters before staying in the middle, Lois Lane takes the woman’s approach back in the 60’s to fixing things and begins kick-boxing the life out of the machine to make it work. All of a sudden, the machine broke due to what they say is Superman’s strong heart…but no, we all know it really was that loon Lane kicking the crap out of it. As Superman leaves on another mission, they inspect the machine to find that it has chosen Lana! Lana immediately takes advantage of her contract and orders Lois to start packing! Yeesh, what a classy lady, you’ve got a real winner in her, Superman!

The next day, Lois leaves for who knows where, while Superman shows up at the lab hearing about Lois’ disappearance from Perry White. After having the whole debacle explained to him, Superman examines the machine to see that it has male and female settings and it was set to examine women. Yup, men and women have different kinds of love, like I knew all along! Love for women and lust for men! Anyways, after realizing the machine was broken, Superman makes his way around the world to find Lois who is teaching English in another country. What is she teaching them? How to say Superman of course! 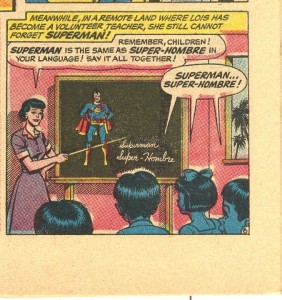 When Superman comes to take her home, she reveals that she was about to head home anyways, as the contest that her sister Lucy entered was done with anyways. Wait…what? What does a car contest by the Daily Planet have to do with this? Well, I’ll tell you dear reader! It turns out that this was an elaborate plot by Lois to lose her job so that Lucy could win the car in the contest without being accused of unfair bias by having a sister work for the company that is giving away the car! Superman flies Lois back to the States and reveals her plan where she purposely moved the needle towards Lana while attacking the machine. But it turns out that it was all in vain because Lucy decides to return the car anyways and lets the runner-up in the contest take the car. And that is how our story ends. But wait….they still have the machine so why don’t they set it up to read men and try again? Probably because they are out of story pages! See ya! 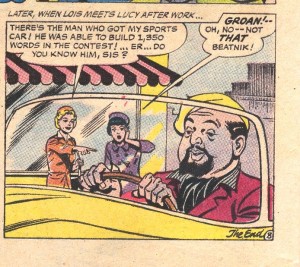 The Rating: 9/10: Everything about this story matched what was going on with the cover. What a pleasant surprise. It also reaffirmed my belief that Lois and Lana are crazy and if Superman had any sense at all, he would tell them both off and start chasing Wonder Woman’s skirt!