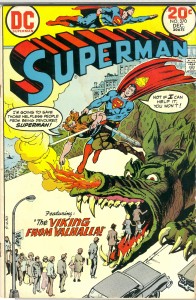 The Cover: Surprise, surprise, Superman is letting innocent people walk to their doom? That’s nothing new for Superman followers, but actively preventing some weird Viking dude from saving them? Well, that’s another plateau of dickery reached by Superman. Maybe Superman is trying to keep him from saving them so he can save them himself and take all of the glory for himself; showboating jerk that he is.

The Story: This tale of Vikings, dragons and Superman opens up with the Norse tribesman; Valdemar; a dude with a flaming sword who rides a eagle named Skagerrak on his way to visit Superman in Metropolis after his recent visit to their city of Valhalla in Northern Maine. Ok first off, I don’t exactly know a lot about Maine…but is Maine such a desolate unexplored place that there are vast chunks of lands where you can hide Norse cities where dudes with flaming swords hangout. We cut back to Clark Kent who’s on TV reporting on all the large amounts of pollution in Metropolis. The broadcast is then interrupted by a report that a “crazy-dressed” man with an eagle is hanging out on top of buildings. As Valdemar begins to draw a crowd, he leaps from the building onto the sidewalk below, trashing it.

Valdemar apparently has some kind of Superman-homing sense, as they never explain exactly why Valdemar can trick him down inside his office building in his Clark Kent disguise. He doesn’t quite have a good grasp on modern living so he begins shimmying up the elevator ropes to stalk Superman while Clark changes into his Superman outfit. Valdemar then bursts into Superman’s room with his flaming sword drawn because that is exactly how you should enter a room.

Superman then points out that his giant falcon is now attacking an airplane so Val and Supes fly out to subdue the crazed falcon which has gone mad for some reason. After subduing the falcon, Valdemar immediately swoons like a 5 year old girl with no real explanation. Taking a moment to collect himself, Val looks down at a city bus with people getting on, but somehow interprets it as a giant dragon swallowing a line of people. Thinking he’s doing a good deed, Valdemar leaps into action and begins to attack the bus full of people while Superman is trying to stop him. Not understanding why Superman is keeping him from saving these people, Val immediately jumps to the brilliant conclusion that Superman is really a crazy tyrannical wizard who is holding Metropolis hostage.

As Val goes on a crazed rampage attacking policemen, buildings and probably windmills if Metropolis had them, Superman finally understands what is causing his hallucinations. According to the brilliant mind of a man who wears his underwear on the outside, this crazy stuff is caused by a combination of culture shock, “extra-foul” air and fall out from an ATOMIC BLAST that happened at a nearby city. What the hell? How can you be so nonchalant about Metropolis being doused in nuclear fallout? And where the hell were you when the bomb was being dropped? Superman was probably the one dropping it on them. Anyways, so to end the fight, Superman digs under the city into a molten pipeline under the city and then uses the steam to knock Val unconscious and push him into the atmosphere to cleanse him of the foulness. We then jump to Valdemar waking up in a hospital surrounded by reporters who questions him about his origins. Deciding to skip all of this silliness, he leaps out a window to fly away on his giant falcon and our story ends there.

The Cover: 8/10: High praise for Caesar? Well, it certainly deserves it as this scenes plays right out in the comic even though the meaning is different due to the dragon being a hallucination.