The cover: We’ve got Superman as heroic as ever saving the citizen from a doomed airplane..wait he’s not saving him? He’s actually throwing a criminal from the plane and killing him instead of arresting him? Oh, and the criminal actually looks like a priest or somewhat like Abraham Lincoln? This looks like it’s going to be a fun story!

The Story:  If Superman is so super…how come he doesn’t notice Lex Luthor on top off a roof aiming a giant gun at him? I’m just asking, because that’s exactly how this tale starts off. With Lex Luthor firing a ray cannon at him without any visible effect as he flies past! Not noticing Lex Luthor shooting him, Superman makes his way to the Daily Planet where he proceeds to Perry White’s office and asks him for a chance to become a reporter despite having worked there for years and is now the anchorman for a television station. White is confused by this act and comments on how young Clark looks all of a sudden but goes along with it, thinking it’s a joke of some kind. Clark leaves his office and proceeds to act as if he’s never met any of the people who work at the Daily Planet.

Meanwhile, a group of thugs hired by Luthor to hijack a place are in the middle of their operation when Superman appears to save the day by grabbing one of them and hurling them off the plane as seen in the cover. Except that the person being thrown looks absolutely nothing like the person depicted in the cover. So while this person is falling to their inevitable death, Superman enters the plan, disarms the hijacker inside telling him to “shut your flapping mouth, junior” and flies back outside to catch the man who thought he was falling to his doom. We cut to Luthor who then explains that the beam he shot Superman with was a youth ray. That’s right, Lex Luthor invented a ray that acts as a fountain of youth and his first act with it? Shoot Superman with it so he becomes less mature to make him easier to fight, which then explains the personality change in Superman in throwing off the thug off the plane. And the reason for wanting to kill Superman this time around? So he can SCALP him and wear his scalp as a hairpiece! Yeesh, just when you thought Lex couldn’t get any crazier, he plans on cutting off Superman’s scalp and wearing the bloody thing as a crown! You know Lex, wouldn’t it make more sense for you to deage yourself and regrow your original hair instead of becoming Hannibal Lector? 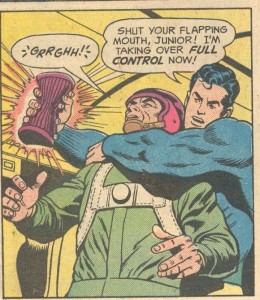 Best put down ever!

But anyways, Luthor then challenges Superman to a duel in the sky through a psychedelic lightshow. They begin fighting with Luthor having the upper hand against this “less mature and experienced” Superman making use of his ingenious arsenal which includes the; Gravity Gun which makes Superman heavy enough to have his own gravitational pull and the aptly named Pain-Inducing Gloves. Really, Lex? You named a glove you wore over your fist to punch Superman the Pain-Inducing Glove? Once Luthor has beaten Superman to a pulp and stands over him about to scalp him, Superman decides the only way to save himself is to make sure of Luthor’s own weapon against him. Superman pushes himself down into the Earth counting on his own newly gained gravity and the Earth’s to drag him and Lex down to the core of the Earth where they will burn up. Despite being able to create a youth ray, Lex can’t figure a way out of his deathtrap so he gives Superman a pill which ages him and allows Superman to save his life by wrapping him inside his cape and swimming through a nearby volcano to reach the surface of the planet. After ridding Lex of all his weapons, Supes flies back home to celebrate his victory by pantsing Steve Lombard. I don’t know about you guys, but after narrowly avoiding being scalped, I would get a drink and not strip the pants off a man.

The Score: 7/10: The scene on the cover did play out, but I’m disappointed that the person being thrown didn’t turn out to be a priest or Abraham Lincoln.