Superman #293: “The miracle of thirsty Thursday” 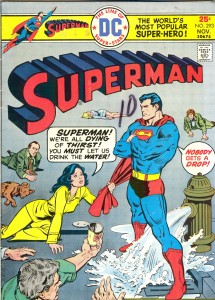 The cover: This cover is pure gold. Superman is standing in the street with his arms crossed and has a stern look as people are lying in the streets unconscious or crawling towards a fire hydrant that is leaking water. It seems that all of the citizens of Metropolis are dying of thirst but Superman is preventing them from drinking. Look at the man who is stretching out with his opened can of beans in a futile attempt to get water from the uncaring Superman. What would happen if they got close enough to take a sip? Would Superman kick them away? Blast them with his heat vision or arctic breath? You truly are a class act, Superman.

The Story: Our story opens up with a time historian named Joann Jaime from the year 3475 on her way back to the past to witness the miracle of a day called Thirsty Thursday. Cutting back to the “present” of August 20th 1975, we intercept Superman as he is fighting an apartment fire. While rescuing a woman, he muses philosophically that so far due to the firefighter’s poor equipment, poor people in tenements are suffering more from fires than rich people. Really, Supes? Does Metropolis have two different fire services? One for the poor and one for the rich? I’m not even quite sure why he feels the need to express this thought since he doesn’t really go any further with it. As he rescues the woman, she cries out that her daughter is still inside. As he swoops in to rescue her and hand her off the doctor, the doctor proclaims that the girl has no heartbeat and that the child is—but wait! This is a job for Superman! Using his Super-Heart Massage technique, he brings the girl back to life! That’s right, only Superman’s heart massages can save lives; don’t worry about using silly medical equipment like defibrillators.

Superman quickly changes back into Clark Kent in the storeroom where he is caught by his boss leaving it. Commenting on how much he sees Clark in there, he asks him what he’s up to in there all the time. Instead of admitting to possible shooting up or touching himself in the closest on his breaks, Clark busts out a joke about a fly in soup to distract his boss. For a man with super-intelligence, Clark doesn’t seem to be able to apply it very effectively outside of making absurd super inventions. Across town in S.T.A.R. labs, a scientist is preparing to put a drop of a “volatile” serum into a puppy’s water. But through some sort of karmic intervention since he’s obviously doing cruel animal testing, he drops the vial which dissipates into a gas. He whips out the antidote to the serum and swallows it before he succumbs to the vapor.

Jumping back to Clark, he is introduced to the librarian from the future, Joann, who notices Steve Lombard playing a prank on Clark and causes it to backfire by swapping their shoes with a matter-transmutation trick. Clark finally gets to work and is on air reporting the fire earlier, which is STILL raging on. Why didn’t he actually finish putting out the fire? He said that the firemen have inadequate equipment, so he might as well let them risk their lives instead of giving it a good quick arctic breath? So while these firemen are fighting this fire, they all of a sudden drop their fire hoses afraid to get near them and all over the city we have scenes of people developing severe hydrophobia.

Superman arrives back onto the scene of the fire and FINALLY puts out the blaze in a flash with a Super-speed airpool. Thanks, Superman, you couldn’t have done that 5 pages ago and prevented the firemen from having to risk their lives some more? Landing to flirt with Lois over his heroics, Superman is suddenly torpedoed in the breadbasket by the scientist earlier who has become some sort of caveman. As they begin to fight, Jaime and a bunch of other time travelers who came back in time just to watch Thirsty Thursday are transfixed by Superman’s fighting techniques, which includes pulling on the scientists hair. That’s right, Superman fights like a schoolgirl. Recognizing the scientist from S.T.A.R. labs, Superman uses his telescopic vision and super-hearing, he overhears the scientists at S.T.A.R. talking about the serum that gives people hydrophobia.

The scientist took the wrong cure for it, which drove him crazy. Why was the scientist even carrying the wrong cure with him? So after hearing that the only way to cure people is by being hyperactive or completely rested or they will die from thirst, Superman leaps into action. Superman uses his heat vision to puncture sleeping gas canisters underneath the city which causes the entire city to fall asleep. There’s so much wrong with this that I’m not even sure where to begin. First of all, shouldn’t the gas tanks explode when hit with heat vision? Secondly, isn’t it kind of unsafe to put everyone in the city to sleep? Like people driving cars, taking baths or performing surgery?

And lastly, why the heck are there chambers full of sleeping gas underneath the city? Do they have contingency plans where they need to knock out everyone at once? Since the sleeping gas fails to knock out the crazed scientist, Superman decides that the only way to save his life is to pummel the crap out of him for 24 hours. So, against a person he admits is not as strong as him, he hits him with a lamp post, throws him around and drops him from the height of a skyscraper.

Instead of making hydrophobia serums, why doesn’t S.T.A.R. just sell that super soldier cure? Once the 24 hours is up, everyone in the city wakes up awfully thirsty. That’s right, the big day marked forever in history as Thirsty Thursday was the day where everyone took a drink of water after waking up. The epilogue of this story consists of Jaime back in the future telling her peers that the miracle of the day was Superman.

The Rating: 2/10 that’s right, we got fooled! The story does have to do with thirsty people, but nothing even close to the cover plays out on the inside! No evil Superman gloating as people die of dehydration nor do we have a man with an open can of beans. In fact, the complete opposite happens; the people don’t want the water while Superman needs them to drink.