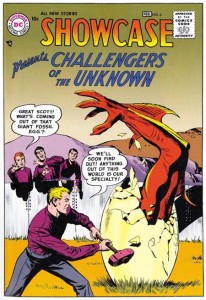 Is this book the catalyst that leads to the creation of the Fantastic Four? Most likely since Kirby was heavily involved in both. If search the net you’ll find a lot of articles drawing quite a direct line from the Challengers to the Fantastic Four.

This book is the first Silver Age super hero team and its the Silver Age’s first true original creation. I’d argue that a successful totally new creation as an answer to the Comics Code was more important in bringing about the change that would explode into revolution a few years later than was a continued rehash of tired old characters that failed not even a decade before.

With all the insane money being thrown at the Action #1s and Amazing Fantasy #15s of the world this comic looks like a bargain.

– The true start of the Silver Age?

– No Challengers of the Unknown, No Fantastic Four?

– Created by Jack Kirby, THE giant of the industry

– Embedded in Showcase, one of DC’s most collected titles