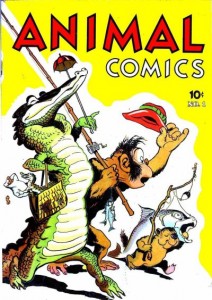 Animal Comics #1 features the 1st appearance Pogo Possum and Albert the Alligator by Walt Kelly. Seven years later in 1948 Kelly started drawing political cartoons for a New York newspaper. It was during this stint as a newspaper cartoonist that Walt Kelly decided to create a daily comic strip that would feature Pogo Possum. Pogo made his strip debut in the New York Star on October 4th 1948.

It would be very difficult to overstate the influence Kelley’s Pogo has had on the world of comics and cartooning. Anyone familiar with the Pogo strips would spot the obvious influences Pogo had on Calvin and Hobbes and Bloom County. The reach of Pogo is broader than you think. Pogo has influenced many a comic genius. Garry Trudeau (Doonesbury) and Jeff Smith (Bone) have both noted being influenced by Pogo. Even Jim Henson is said to have drawn on the Pogo sense of humor for his Muppets. Asterix and Obelix creator Rene Goscinny was also said to be a big Pogo fan, incorporating visual and humor techniques employed by Kelly. Other creators citing Walt’ Kelly’s Pogo as an influence include Robert Crumb and Alan Moore.

– Pogo successfully made the jump from comic books to newspaper strips

– Highly influential character that influenced many popular characters since