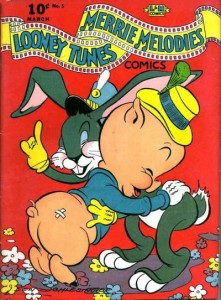 It’s not that funny animal keys are not going up; they’re just not going up as fast. WDC&S #1 was ranked 18th by value back then while today it has slipped to 40th place.

For a major innovation we need not look further than Looney Tunes and Merrie Melodies Comics #5. Looney Tunes #1 introduced the great stable of Warner Brothers characters that included Bugs Bunny, Elmer Fudd, Daffy Duck and Porky Pig to comics and it did not take long for the title to shake things up. Issue #5 contained a story called The Super-Duper Rabbit. Super-Duper Rabbit represents the 1st funny animal super hero.

This innovation may not seem like much but it does show the tremendous adaptability of comic books. Many subsequent comic book characters were able to successfully capitalize on the popularity of the super hero genre, Archie (Captain Pureheart), Bart Simpson (Bartman) and Goofy (Super Goof) are 3 that quickly come to mind.