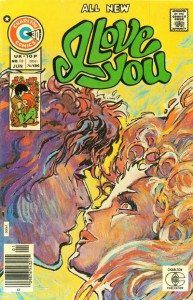 I’ve been very excited about the Valentines edition of the Undervalued Spotlight for a least a month now. There are so many great Romance Comics to choose from. I’ve already picked Young Romance #1 as undervalued (and rightfully so) back in Spotlight #39. Still there were so many undervalued romance books out there that it became really hard to choose. I visited some of Matt Baker’s best romance work and I also considered some of DC’s late 60s/early 70s stuff that I’m so fond of. At the end of the day I went with the title that says it all. I Love You!

You absolutely cannot get a better Valentines themed title than I Love You!

I Love you ran from issue #7 all the way to issue #130 providing romantics a quarter century of top notch romance. The title has seen contributions from industry giants including Jack Kirby, Steve Ditko, Bob Powell and Tom Sutton while no less than David Cassidy and Elvis Presley have graced its pages. 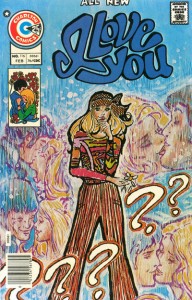 Issue #118 is late in the run and has a beautiful painted Tom Sutton cover that oozes romance in it’s depiction of a couple locked in a loving stare! It is one of only two painted covers in the whole run. Issue #116 is the other painted cover but I thought a girl trying to pick which of the four guys she’s seeing flew against the principle of the whole February 14th thing (shame on her). 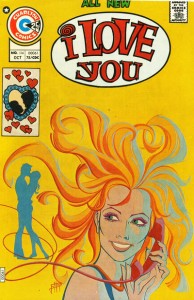 Now the Overstreet has really got it all wrong when they single out issue #114 for its unique psychedelic cover. Yes it is an amazing cover but surely not worth over twice as much as the two exquisite Sutton painted covers mentioned above (Overstreet values #114 at $20). On a side note the original paintings for both of these beautiful Tom Sutton covers can be seen at Big B Comics in Hamilton, Ontario. I don’t even charge admission to see them.

OK so you get the beautiful Sutton cover, 8 pages of Art Cappello pencils and inks in “Cure for Heartbreak”, and 6 pages of Bob Layton inks in “My Frozen Heart” and a third 8 page story called “Choose Your Partner”.

I swear, you give this comic to that special someone today and you are in!