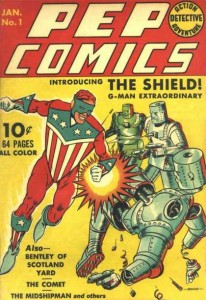 Pep Comics #1 is an incredibly strong comic book. Just take a look at the great robot cover (one of the early robot covers in comics).

This book feature the 1st appearance of the Shield, America’s 1st patriotic hero (Captain America was still a full 14 months away). Writer Harry Shorten and Artist Irv Novick crafted the tale of Joe Higgins whose scientist father was killed while working on a chemical that gave super powers. Joe takes his dad’s chemicals, becomes superhuman, dons a flag inspired suit and goes to work for the FBI. The comic was a huge hit at the time.

Pep Comics #1 also features the 1st appearance of The Comet. The Comet was written and drawn by Jack Cole, an industry giant who later went on to create Plastic Man. The Comet may have the distinction of being the first superhero to die fighting the bad guys. The Comet dies in Pep Comics  #17 (July/41). I should note that the Comet got his powers by shooting a gas many times lighter than hydrogen into his veins. This gave the Comet the ability to fly but also caused his eyes to uncontrollably emit disintegrating rays. The Comet wore glasses to stop the rays. This could be seen as an early predecessor of X-Men’s Cyclops.

The January 1940 publication date means the book had a late 1939 street date putting Pep #1 at the very leading edge of the superhero Golden Age.

Being the first out of the blocks often increases ones chances at success. Superman, who appeared a year and a half earlier was the first true superhero and has remained the atypical superhero for over 70 years.

Oddly it may have been another Pep Comics first that helped spell the demise of the Shield.  Archie Andrews first appeared in the Shield’s flagship Pep title starting with issue #22 (Dec /41). Archie was the first successful teen humour character in comics (and still is after 70 years). Archie started creeping onto the Pep covers with issue #36 (Feb/43) and soon after that Pep was basically an Archie comic.

Pep Comics is unique in a way for spawning 2 important comic book firsts (perhaps even a third with Comet’s death). Somehow Archie has achieved success while the Shield fell into obscurity.

Archie’s success at the expense of the Shield foreshadowed the super hero demise that would come a few years later. It’s interesting to note that comic history teaches us that the crime and horror books of the late 40s were primarily responsible for the demise of the superheroes. I don’t think enough credit has been given to the success of teen humour books. By 1945 MLJ’s Archie, DC’s Buzzy, Quality’s Candy and ACG’s Cookie were all doing brisk sales and stealing readers from the superheroes.

As far as the Shield losing his spot as the main patriotic hero perhaps his timing was wrong. Captain America was published at a time when World War II was at its height and by then  it was clear to everyone whose side America was on (America of course did not enter the war until the end of 1941). Timely’s dramatic war covers and stable of other war fighting heroes (Sub-Mariner and Human Torch) helped Cap quickly become the most popular of all the patriotic heroes (Fawcett Comics also had patriot hero Minute Man as did New Friday with Captain Battle). I’m sure quality had something to do with Captain America’s rise a well. The Simon and Kirby creative team that gave us Captain America was a formidable competitor. The last Shield story in Pep comics ran in issue #65 (Dec/45).

The Shield enjoyed a head start as America’s patriotic hero. He was eventually eclipsed by Captain America but this does not mean he should be forgotten. Actual sales results are dissapointing, a CGC 9.2 cpy sold for just over $10,000 in November 2009 while a CGC 9.0 only fetched $7,100 in May of 2010. It’s obvious to me that Pep Comics #1 seems extremely undervalued in the marketplace.

The Shield has made a few abortive comebacks namely his Silver Age attempt in Fly Man #32 (July/65). In the 90s DC licensed Archie superheroes including the Shield. J. Michael Straczynski wrote a 6 issue arc called The Shield and this story has been collected in The Shield: Kicking Down the Door graphic novel.