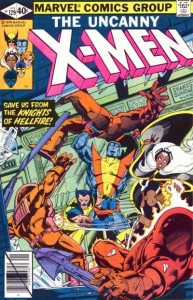 X-Men #94 is perhaps the most celebrated re-jigging in comic book history. The book immediately began making waves, and fans. Soon the Chris Claremont/Dave Cockrum creative team had the X-Men title shooting up the charts. The first major arc that really got people talking was The Phoenix Saga that ran in issues #101 to #108.

John Byrne relieved Cockrum as artist with the last issue of the Phoenix Saga #108. Byrne also wrote with Claremont and the two really brought the book to the next level. The Canadian Byrne created Alpha Flight (X-Men #120 and 121) during this time and X-Men became the darling title of comics.

Just when you think things could not get any better the Byrne/Claremont team gives us X-Men #129. “God Spare the Child” is the title of the 17 page story in X-Men #129. It is a landmark X-Men issue introducing Kitty Pryde and Emma Frost.

Kitty Pryde is actually the first new mutant to join the X-Men since the mass joining that happened in Giant Size X-Men #1 (1975). Kitty later became a member of Excalibur and was also a SHIELD member. Kitty also created quite the controversy when she showed desires towards teammate Colossus. The problem was Kitty was 14 and Colossus was 19. Check out X-Men #165 for all the drama.

Emma Frost is introduced as the evil mutant telepath the White Queen. Frost has changed from one of the X-Men’s

biggest foes to one of the core members of the team. Emma Frost always scored top 10 in all the hot comic book babe polls. Ohh those Greg Horn covers!

The Dark Phoenix Saga is perhaps the best known X-Men saga of all and many call it the team’s finest hour. It is certainly one of the most referenced comic book story arcs ever!

Apologies in advance for the terrible Dark Phoenix Saga recap I’m about to type out.

The X-Men try to recruit a new mutant Kitty Pryde but while doing so Jean Grey’s Phoenix persona morphs into the Dark Phoenix, very sinister and all powerful. Dark Phoenix escapes this world and goes on to annihilate a whole star system. Her rampage is noted by the Shi’Ar who track her back to Earth. The X-Men battle the Shai’Ar to save Jean Grey. In a moment of emotional detachment from the Dark Phoenix Jean Grey commits suicide.

The suicide ending was not how Byrne and Claremont originally wrote the ending. Then EiC Jim Shooter made then change the ending but I’ll save that story for when I get around to featuring the very deserving X-Men #137 in the Spotlight.