By now, a lot more of us know that there were two eras to the Canadian Golden Age of comics. In the U.S., the measure of the Golden Age extends from Action 1 in 1938 to about Showcase 3 in 1956 with the Silver Age kicked off by the appearance of Showcase 4 and the return of superheroes other than Superman and Batman to local drugstores and newsstands. True, in the States, there were internal bracketed collecting genres such as “Good Girl Art (GGA)” books, pre-code graphic horror books, Atom-Age books, etc. But, generally, collectors know what “last golden age issue” means with reference to titles, such as World’s Finest Comics, that run through the transition between both periods.

With respect to Canadian comics, our “Golden Age” had two phases, both brought about by national economic stress and its resulting political response. Our comics began with the December 6, 1940, War Exchange Conservation Act set down by MacKenzie King’s parliament. It stopped products it deemed non-essential to the wartime Canadian economy (such as comic books and pulps) from crossing the border from the U.S. to Canada. A couple of months after this, the first Canadian comic books, Robin Hood Comics Vol. 1 No. 1 and Better Comics Vol. 1 No. 1, both dated March 1941 appeared. This led to a six-year run of original Canadian comics that eventually started to peter out after the end of the but lasted till the end of the Robin Hood title’s run with issue 34 dated December 1946-January 1947. This group of around 780 comics, I’ve given the set name “WECA Comics” based on the acronym for the Parliamentary Act that created them, and I’ve put out a checklist and price guide to help understand and appreciate their viability as collectibles. Popularly, many people call comics from this group “Canadian Whites” without understanding what they really were or their extent.

There is one comic that came out just after this WECA window closed and that was the May 1947 issue of Super Duper Comics 3 published by F. E. Howard. We’ve clawed this issue back into the group because it appeared as a collection of colourized WECA era stories that had been finished just as the post-war guillotine fell but with no live Bell Features titles left to put them in. F. E. Howard bought up these stories (including some featuring Nitro, Nelvana, the Brain, and Mr. Monster), added colour to them, and put them out in a giant comic that he intended to distribute in the U. S. as well as Canada.

We have to remember that some American comics that were deemed “educational” such as Classics Comics, Real Heroes, and True Comics (though the True Comics destined for Canada had their titles changed to True Picture-Magazine) were allowed through the ban and were on Canadian newsstands during the WECA period. However, these weren’t printed in Canada, so we don’t consider them to be WECA comics, though I’ve seen the True Picture-Magazine books erroneously called “Canadian Whites” in Comic Link auctions. 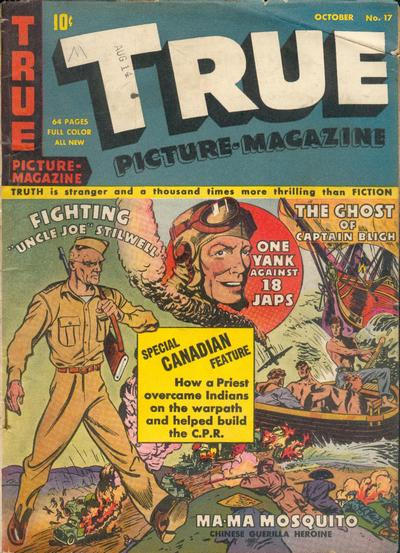 However, there are some blemishes on this neat “WECA window” that we still need to understand properly. These are the American Pines books that were published in Canada by Publication Enterprises Ltd. In Toronto during 1945 and 1946. There is evidence of the reprint of the American Exciting Comics 35 (October 1944) by Publication Enterprises numbered as Exciting Comics 39 in Canada with the indicia date of March-May 1945.

Other reprints of American Pines titles such as America’s Best Comics, Thrilling, and Startling Comics also exist from early 1945-6. Perhaps some other Pines American titles such as Fighting Yank and Happy Comics exist as reprinted Canadian copies from this 1945-46 period as well. There was also a copy of Goofy Comics 16 reprinted by Pines in Toronto during 1946 that shows a sampling of American comics that would have been on the stands in 1946, whether as reprints or actual American copies themselves, we don’t know. We’re not sure how these reprints were allowed during the ban and we’re not sure how many were put out, but to have an American reprint on the stands as early as the spring of 1945, even before the war was over, is strange. My opinion, right now, is that I don’t think these books should be labelled WECA books (but, I bet if one showed up on a Comic Link auction, they would label it a “Canadian White”). Instead, I think the should be looked at as precursors of the coming FECA or reprint period. I welcome thoughts and comments on these types of books.

With 1947 we begin the second era in Canadian comics. I first wrote about this period over four years ago here and explained there my choice of the acronym FECA to describe this 1947-56 era. What I’d like to try and do in today’s column is begin to sort out what might be the earliest Canadian published comic to appear in this era. I’ve already discounted Super Duper Comics 3 (May 1947) as really an artifact of the WECA period.

The parliamentary act that defined this era didn’t come down until the middle of November in 1947. Here is an account I found in Dan Malan’s Complete Guide to Classics Comics, Vol. Two: Foreign Series of Classics Illustrated and Related Collectibles (Classics Central.Com 2006), pg. 11. The quote originally appeared in an article by Mike Sawyer from Classics Journal No. 1 (Nov. 1983) The paragraph is a reply from the head of The Canadian Tariffs Office to a question Mike asked about the second ban of American comics in Canada:

In 1947, Canada experienced a severe US dollar shortage caused by increases in Canadian purchases of goods in the U.S. while at the same time Canada’s customers in the United Kingdom and Continental Europe, disorganized by the war, were still unable to pay in hard currency for Canadian exports…. On November 17, 1947, … the Government instituted an emergency import control program under the Emergency Exchange Conservation Act…. On December 31, 1950, the operation of the Act was suspended.

Now the assumption is that American comics began to again appear on Canadian store shelves after the war was over and up to this point in the middle of November 1947 when the new act took effect. But this new ban prevented that but allowed Canadian publishers to import printing mats for American comics and print copies in Canada for sale in Canada.  The comparatively low quality of the Canadian printing process often resulted in the colour register being off or inaccurate for these reprinted books.

There appears to be this “Twilight Zone” of Canadian comics between the end of the WECA period at the end of 1946 and the institution of this new November 1947 Act banning again the importation of American comics into Canada. We find hardly any Canadian comics with a 1947 indicia date. The new Canadian FECA or “reprint” period really begins in full in 1948.

What 1947 Canadian comics do we know about? The earliest I can find seems to be Superior’s Red Seal Comics 19 with a date of June 1947 with three more consecutive issues, 20-22 dated August, October, and December respectively. The numbering appears to continue from the American Red Seal Comics which ended with No. 18 in October 1946. The cover of No. 19, featuring The Black Dwarf appears to be unique and perhaps drawn by a Canadian artist. The contents are all Canadian artist Ed Letkeman story reprints from Zor the Mighty No. 1 and Space Nomads No. 1. The rest of this series is mainly Chesler reprints with a couple of Canadian Letkeman stories and the odd Fred Kelly story thrown in here and there.

1947 also gave us a short three-issue run of four Classics Illustrated Nos. 17-20 all with blank back and inside covers that were printed in Canada. It also gave us the anti-communist giveaway Is this Tomorrow? which was the Canadian adaptation of the American issue put out by the Catechetical Guild Educational Society. The context was relocated to Canada and a French version was put out in Quebec.

Canada’s Wilson Publishing started doing reprints of American Dell Four Color Comics with issue 148 which was dated July 1947 and appeared a couple of months after the American issue. The assumption is that Wilson continued to reprint all the Dell Four Color issues up until 1951, though copies of all these issues have not been found yet, especially issues under 200.

Lastly, Better Publications of Canada seems to have begun its output with Barnyard Comics 15 dated December 1947, probably put out just at the time that the FECA Act came down.

Looking at 1948 Canadian Comics on the Grand Comics Database, I put together the following chart of what looks like the first issues of Canadian reprint runs that began in that year.

You can see that D.C., Fawcett, Archie, and Disney reprint titles came early in the year, while Timely titles lagged behind until after the summer. If readers are aware of earlier first Canadian reprint issues, please let me know so that I can add to and correct this working chart.

The above is the best accounting we can make right now of the years 1947-48 in Canadian comics. I hope that readers will help me make adjustments and additions where necessary.

Still, there are a whole bunch of questions regarding the FECA period that need to be addressed and these could easily become collecting sub-genres for Canadian comics:

Which comics came out with blank inside and back covers and when (for a while this was an easy way of recognizing that you had a Canadian reprint because all the American ads were taken out)?

When did the hybrid comics (books with American reprint contents but with new titles and covers, often taken from interior splash pages) start coming out and what runs were there?

Bell Features had a run of comics with original contests on the back covers that published the names and cities of winners every month. How many were there and what issues did they appear on back covers?

There were sets of giants containing reprint material with unique covers during the FECA period. How many were there?

There were a handful of original Canadian comics with Canadian content that came out in the FECA period such as Red Seal Comics 19, Hockey Comics and Export’s Science Comics. How many were there?

The FECA period has a much greater scope than the 780 or so books that came out during the six years of the WECA period. It will be a huge task to map out and get a grasp on the full extent of these books. I hope that this article provides a small start.

Jack Tremblay passed away this Remembrance Day. He was one of the last couple of people who were there at the start of Canadian Comics and this led to a life full of art in commercial projects and eventually in fine art. He loved going to cons with his son Rick Trembles and sharing his early love of comics. He was presented with a Doug Wright Giants of the North Award in 2014 and was inducted into the Joe Shuster Hall of Fame in 2017. You will be missed by so many, Jack.

Trailblazers, Galleries, and a Symposium