I’d like to take a small respite from this small blog for a few weeks to work on a couple of other things. I plan to post the short columns I did for Leif Peng and his Daily Inspiration blog a couple of months ago. They might be slightly reworked or adjusted with some new tidbits, but I’d like to share them here as well. Should an inspiration itself choose to strike me about these old war-time Canadian comics, I shall lurch and spit it out here like a good old hairball.

Just as a good number of artists who worked on those Canadian war-time comics were,  Jack Tremblay was born outside of the country in Providence, Rhode Island in May of 1926. His family moved to Fort William (now called Thunder Bay) and finally, when he was eight, the family settled in Montreal.

In the fall of 1941, Jack Tremblay entered a drawing contest that was announced in Wow Comics No. 2 (Nov. 1941) and three issues later in Wow Comics No. 5 (Feb. 1942) his name received special mention as one of the winners, garnering him a shiny new pair of roller skates.

With his name known to Bell Features through the contest, he mailed them in a sample of a strip called “Crash Carson” that he had been working on during the previous winter and, three issues after he had won the contest, his work was published in Wow Comics No. 8 (May/June 1942) just around the time he was turning 16. At this time Jack had just begun his first year of art school at Ecole des Beaux-arts in Montreal and studied there with  Stanley Collins and Alfred Pellan. The work that saw daylight in Wow Comics No. 8 was altered slightly by the publisher. Instead of using Tremblay’s original splash page for that first Crash Carson story, the publisher decided to have another artist produce one with a little more punch and that job was given to Edmond Good. This I know only because Mr. Tremblay has chosen to share it with me. 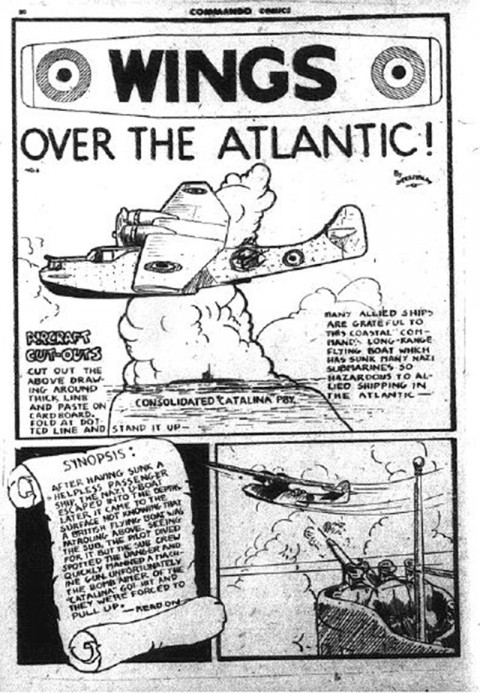 “Crash Carson” ran for about a year-and-a-half until Wow Comics No. 16 (Aug./Sept. 1943). In October of 1942 another of his strips entitled “Wings over the Atlantic” began in the first issue of a different newly minted Bell Features title called Commando Comics and he drew this feature for two more issues until it was handed over to Andre Kulbach in issue No. 4 (March/April 1943).

After turning 18, Jack Tremblay began training in the Paratroop Corps of the Canadian forces from September 1944 to September 1945 but the war was brought to an abrupt end with the Atomic Bomb before he could see any action. In the late forties he worked at ad agencies as a freelance artist.

In 1955 he adapted and illustrated Ten Canadian Legends (A Story from Each Province) published by Brunswick Press out of Fredericton.

In the sixties, Jack Tremblay wrote and illustrated eight of the 12 books in the series The Story of Canada for Brunswick books again and illustrated Harvey H. Smith’s Shelter Bay for McClelland and Stuart as well as illustrating Gregory Clark’s prose for the newspaper supplement Weekend Magazine.

In the seventies, under the name Jean-Jacques Tremblay, he began serious painting and had his first solo exhibition in 1976 at Galerie LIbre in Montreal just when he turned 50. His paintings sold well.  It’s significant to note here that many of the “Canadian Whites” illustrators eventually became accomplished fine artists after their “apprenticeships” in those Canadian war-time comics (Adrian Dingle and Gerald Lazare are the best known examples of this.)

Today, in his late eighties, Jack Tremblay is continuing to produce art and employing computer graphics as his main vehicle. His son. Rick Trembles, is a successful and well-known Canadian illustrator out of Montreal.

From Commando Comics No. 3