This week we take another look back at the Fantastic Four and another small run within opening #1-67 run of this fabulous book. This is part four if you are counting.

We’ll start by meeting a Dragon of sorts at school… 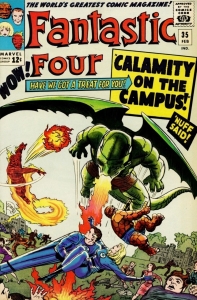 The Fantastic Four arrive at State University, Reed’s old alma mater to give a speech to the students. The FF meet the students, play a little football, and tour the facilities. Along the way, they meet Professor Xavier and Scott Summers who are undercover looking for potential mutants at State U. Peter Parker is checking out State U as well as a potential  school when he graduates from high school. Johnny Storm dislikes Peter Parker almost as much as his Human Torch persona dislikes Spider-Man. Peter Parker/Spider-Man feels the same way about him. Marvel spends a lot of time in their early super-hero days of weaving these chance meetings between other characters in the Marvel Universe into storylines to great effect. It helped make it a tight-knit universe.

Once all the pleasantries are past the real story begins. Diablo the Alchemist returns (first seen in FF#30) and tracks down the FF to State University seeking revenge on the Fantastic Four. He meets a Dr. Gilbert a State U. professor who has made a lifeless but very real looking android Dragon. Diablo see’s his instrument of destruction in the Dragon and with the use of alchemy brings the Dragon to life. A battle ensues with the FF, but soon the Dragon Man see’s that Diablo is a bad guy and chases him out on to Dead Mans Lake. They both fall through the ice on the lake and are swept away in the undertow. They both live of course and return to torment the FF in the near future. Before the Fantastic Four Leave State U., Reed proposes to Sue on the University’s lover’s lane. They will be married within the year (in Fantastic Four Annual #3). 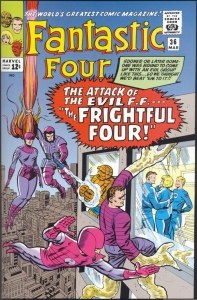 Reed and Sue are busy announcing their engagement to the press. It’s getting pretty syrupy here. Just before I go into diabetic shock the scene switches to the formation of a new super-villain team – The Frightful Four! The Wizard, Sandman, and Paste-Pot-Pete have all joined together to form a deadly team. These guys have a connection to the Fantastic Four via the Human Torch and his series – Strange Tales. They are however waiting for a fourth member the Wizard has potentially recruited and she finally arrives – The mysterious Madame Medusa with gorgeous red living hair. The team is set for an attack on the Fantastic Four who are blissfully unaware of this new danger. They are busy hosting an engagement party at the Baxter building with the X-Men and Avengers in attendance. What No Hulk! No Spider-Man! Well Spidey does show up just long enough to pinch a piece of cake. As the party breaks up the Frightful Four arrive and quickly subdue The Thing, Reed & Sue. Alicia Masters get’s off a distress signal before she too is captured. Johnny Storm is out working on a hot rod and see’s the signal and flames on. The Frightful Four have knocked out the three remaining members of the FF and attached them to a string of the Wizards anti-gravity discs. He activates the discs and they begin floating into space and certain death. The Torch arrives and forces the Wizard to fly his ship in to space and save the day. It’s a close call but the Torch arrives in time to save the balance of the team and Alicia Masters. A very short battle follows with the Frightful Four in full retreat. Sue and the rest of the Fantastic Four know this is just the beginning of their troubles with this group of baddies.

Fantastic Four #36 gets the most love from Overstreet of books we are covering here today. The first appearance of Medusa who we find out later is from a race of Inhumans is the big draw here. Medusa eventually leaves the Frightful Four and begins her somewhat reluctant return to the Inhumans in the pages of Fantastic Four #44. 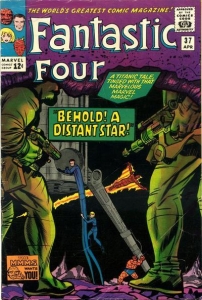 Sue Storm is still troubled by the death of her father at the hands of the Skrulls (Fantastic Four #32) and wants to see the guilty Skrull held accountable. Run Reed Run! This Sue Storm gal looks like she will be a pretty high-maintenance wife. This isn’t a room re-decorating job, Sue wants to go to outer space, to a far away galaxy and ask an alien race for justice for her dead father. No problem for Reed Richards and the rest of the Fantastic Four. They board a spaceship and they are on their way galaxy hopping. Meanwhile at the Skrull empire the warlord Morrat and the King’s daughter are having a lover’s quarrel of their own. The King refuses to grant a marriage between the two. The King does not trust Morrat as well he shouldn’t if he values his crown. The Fantastic Four arrive and a battle between Morrat’s men and the FF is on. The good guys are winning when the King and his men arrive. The King is furious and wants to charge Morrat with treason. He challenges the King and as the King fires upon Morrat, his daughter jumps into the line of fire. Morrat is killed, the daughter is not. Sue’s invisible force field saves her. Reed asks for justice and the man who killed Sue’s father. The King replies that justice has been served, Morrat was the guilty party. The Fantastic Four return to earth, just in time for a rehearsal with the minister for Reed and Sue’s wedding…

I often wondered why the Skrulls were not featured on the cover of issue’s #32 and #37, two pretty pedestrian covers. 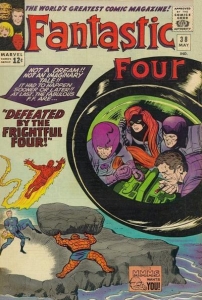 Fantastic Four #38
May 1965
Defeated by the Frightful Four!

Our story begins with the usual playful roust about that takes place within this team. The Human torch heads out and just misses seeing the Wizard. The Frightful Four are about to return. They all have snazzy matching purple uniforms. Paste-Pot-Pete has turned into the Trapster (know where near as much fun as P-P-P). The team is in turmoil and wants to select a new leader but the Wizard quickly squelches that idea. The next day Sue Storm is quickly abducted from a dress shoppe by Medusa and the rest of the Frightful Four. This time a full-blown battle between the two teams ensues at the Frightful Four home base where Sue is being held captive. The Fantastic Four find Sue, but the Frightful Four have escaped leaving their base rigged to explode with an atomic blast. The blast occurs and the FF are left floating unconscious in Sue’s invisible force field. The Thing is reverting to normal Ben Grimm as this issue comes to an end. 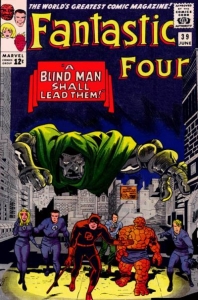 The Fantastic Four are brought aboard a ship and taken to the infirmary. They are trying desperately not to panic but all four members of the team have lost their powers in the atomic blast that happened last issue. They feel very vulnerable to attack. Reed tries building suits that will mimic their powers in a warehouse down the street from the Baxter building. We switch scenes to Latveria home of Doctor Doom, still basking in the glory of his defeat of Reed Richards in Fantastic Four Annual #2. A hypnotist is performing tricks at the castle and Doom is growing tired of the act. The hypnotist discovers Doom himself has already been hypnotized and the spell is removed. Doctor Doom realizes he has been tricked by Reed Richards and goes postal. Vowing death to the Fantastic Four he leaps to his ship and is off. Back at the warehouse lawyer Matt Murdock (alias Daredevil) has arrived. Reed Richards wants to make certain his scientific research gets to the US government in the event of an untimely demise. Matt knows something is horribly wrong and just then they are attacked. Matt uses the explosion as a way of changing in to Daredevil. They quickly see who their antagonist is – Doctor Doom from inside the Baxter building. He throws weapon after weapon at them. With the aid of Daredevil the powerless Fantastic Four manage to evade each volley. Doctor Doom soon figures out that the Fantastic Four are powerless and decides to toy with them. Daredevil becomes a decoy for the Fantastic Four as they try to work their way to the Baxter building as this issue comes to an end.

Fantastic Four #39-40 are a bit of a showcase for the new “red” Daredevil who was at issue #8-9 when these books were produced. 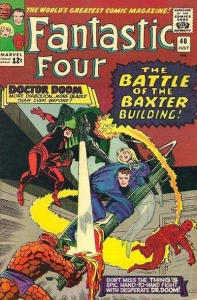 Fantastic Four #40
July 1965
The battle of the Baxter building

Doctor Doom continues to toy with the Fantastic Four as they try to advance on the Baxter building. Daredevil is the first to make it into the building and confront Doctor Doom. Daredevil puts on a great exhibition of dodgeball against an opponent in which he is severely outmatched (not unlike Daredevil #7 – only worse). Doctor Doom crushes Daredevil’s hands and wrist but DD has bought the time the Fantastic Four needed to get back into the building. Reed has a gizmo that can turn back on everyone’s powers. He saves the last blast for the Thing. Ben Grimm doesn’t want to turn back into the Thing, but Reed really doesn’t give him a choice and fires away. Ben Grimm slowly reverts into the Thing. The last six pages of this book are a full hand to hand/gizmo battle The Thing versus Doctor Doom. The fighting mad Thing wins the battle decisively but announces he is quitting the Fantastic Four at the end of the book. A story for another day as this run comes to an end.

The 46th Overstreet Price guide values for the books covered today are listed below.

Marvel comics may not publish the Fantastic Four as a comic right now but you can never go wrong looking back at these Kirby/Lee classics while you wait for them to come back!

Here is wishing everyone a safe and happy holiday season. Merry Christmas!!