We’ll start 2018 off with another segment of Jack Kirby/Stan Lee’s terrific run of Fantastic Four #1-67. Although I have always personally thought “peak time” for this run was #44-60, you can make a pretty good case for the ten-issue run we are looking at today to be in the same class.

All of the books we will cover today are penciled by Jack Kirby. He has inking help from Dick Ayers, Steve Ditko, George Roussos, and Paul Ranheim. Stan Lee weaves the tales.

We have ten issues to cover today so I will try and focus on the historical importance of the stories, characters involved, and not so much on the actual story in the book. Hey it’s early Kirby/Lee Fantastic Four what could possibly go wrong? 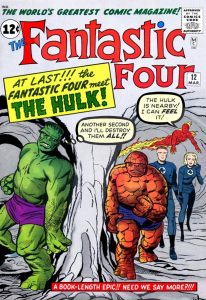 We’ll start this run off with a true Marvel key featuring the very first meeting between the Fantastic Four and the Hulk. I always thought of this book as a reward for suffering through the introduction of the Impossible Man in the previous issue. All was forgiven with the arrival of this book. The story does take its time unfolding, The Hulk and Fantastic Four don’t actually meet until page seventeen in a twenty-three-page story, followed by a brief battle that ends early with a ray-gun blast from the stories villain – the Wrecker (a communist agent).

It all seems secondary to Marvel characters just meeting and interacting in a book for the first time (tied with Amazing Spider-Man #1). It sets the stage for the future dramatic showdown between The Hulk and The Thing in Fantastic Four #25 & 26 and many, many more crossovers in Marvel comics. This book reminds me of just how many early key books involved a Hulk crossover. The aforementioned FF’s, Amazing Spider-Man #14, Journey Into Mystery #112, and his early Avenger appearances in and out of the team. It’s also still a much sought-after, tough and expensive book to find in grade today. 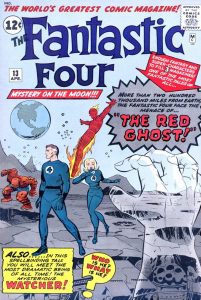 This book features the first of six new super-villains we will meet in this run alone from Kirby and Lee. More importantly it is the first appearance of The Watcher. The Watcher becomes an in tragal part of the Fantastic Fours cosmic world as a mentor, ally, friend, and guide to the team and all things cosmic. Probably his most famous role here was his introduction of Galactus and the Silver Surfer in FF#47-50. In this issue the space race between the Americans and Russians is at the heart of the story, but it turns into a battle on the moon with a brand-new baddie from Russia – The Red Ghost and his Super-Apes. The FF have their hands full with these guys, but finally win out. A return match is scheduled for issue #29 of the Fantastic Four. 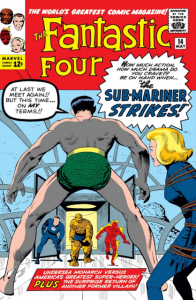 In this issue we are introduced to “The Thinker”. He is called that throughout the book although the front cover calls him the Mad thinker. It is the Mad Thinker we come to know as the villain that terrorizes the Marvel Universe for many years to come, often paired with last issues villain the Puppet Master. We are treated to the origin of the Thinker and some of his plans for what else – ruling a nation or the world. He has the Fantastic Four back on their heels for a time until the superior brain of Reed Richards takes over and wins the day. 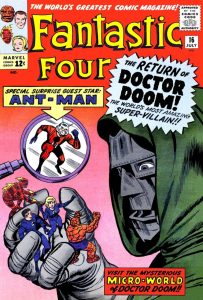 The Fantastic Fours most deadly foe Doctor Doom returns in his fourth appearance in the book. Fantastic Four #16 also sports one my favourite Doom covers. The Fantastic Four are suffering a shrinkage problem (not the old man kind), they are shrinking in size without warning putting them in various perils. Reed Richards calls on the expert in small Henry Pym – The Ant-Man for some help (his first crossover). The Ant-Man provides a shrinking and normal size formula to Reed and the rest of the team who travel to the micro-world and find the new ruler of this world – Doctor Doom waiting for them.

After a couple tussles, and with the assistance of Ant-Man, Doctor Doom exits to the normal size world and the micro world is put back in order pre- Doctor Doom. This book serves as a vehicle for Marvels mightiest small hero. You are encouraged to follow his exploits and the Wasp in the pages of Tales to Astonish #44. 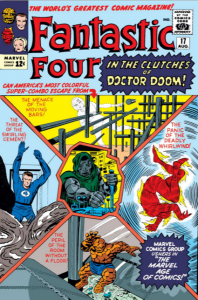 No rest for the weary. The Fantastic Four bid adieu to their new found little friend the Ant-Man, rest for about five minutes, and then begin there search for Doctor Doom. Be careful what you wish for as Doctor Doom is making plans for them as well. This becomes pretty much an all-in battle issue with Doctor Doom getting the upper hand early on with an assortment weapons and gadgets. The Fantastic Four finally get to Doom and rather than face being captured, he leaps out of his ship to his apparent death. He is not gone long though, showing up next in the pages of the Amazing Spider-Man #5.

I often use the terms scuffles, tussles, and obstacles to describe the various deadly gadgets that Doctor Doom throws at his intended victims for them to overcome. They are of course much more than that. These “gizmos” are all parts of the wonderous imagination of Jack Kirby. He brings this to the table so often and so well in each and every issue that I (we) sometimes take it a bit for granted. It is very special. 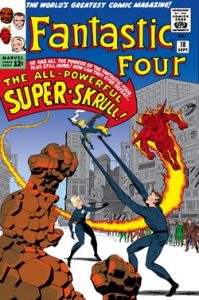 The Super-Skrull concept was very popular and adopted by and used in other books. The Super-Adaptoid in Captain America and Avengers and others. The Mimic was a mutant who could “mimic” other powers etc. Unlike some of the other books in this run it has held its value very well. Tough book for a bargain hunter like me. 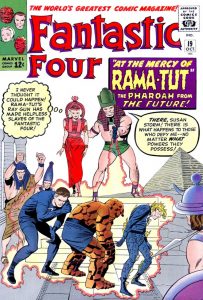 The Fantastic Four dabble in time-travel for the first time. Reed Richards thinks he may have found an element in the past that may cure Alicia Masters of her blindness. This venture turns out to be a failure and they return home empty handed. They do meet the time traveller Rama-Tut who it turns out to have many different identities, through different time periods. The Scarlet Centurion, Kang the Conqueror, and Immortus among them. I wouldn’t be surprised to see this guy used in a future film property. 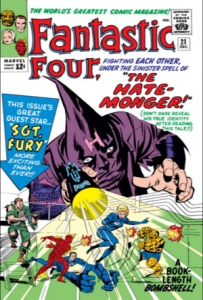 We have made it to the last issue of our run and the villain is a “new” character called the Hate-Monger. Colonel Nick Fury makes a cross-over guest-appearance in this issue. Sgt. Fury and a young Reed Richards had previously met in the pages of Sgt. Fury #3. He teams up with the Fantastic Four to take down the purple hooded Hate-Monger and his gang of goons. The Hate-Monger uses a “hate ray” to increase hate amongst and between people. It spreads wherever it is used. Once exposed even the Fantastic Four turn on each other. The Hate-Monger is dressed in a familiar purple hooded outfit often used in war comics of the 1940’s depicting dreaded Nazis (Marvel Mystery #45 and Suspense #3 come to mind). The KKK could file for patent infringement on this outfit. Eventually the Hate-Monger is taken down by his own goons and the hatred he has instilled in them. The big surprise comes when the hood is removed from the Hate-Monger and he is revealed to be Adolf Hitler (later explained away as a clone). The greatest villain of the 20th century now reduced to a one-shot appearance in the Fantastic Four! Only in a comic book. If only all the hatred in the world could be turned off this quickly.

A really solid run of books here, a little pricier now than when I first collected them.

The 47th Overstreet Comic Book Price Guide values for the books covered today are listed below.

Marvel recently announced that they will be publishing the return of an old title – Marvel Two in One featuring The Thing and the Human Torch. I suspect Mr. Fantastic and the Invisible Girl won’t be too far behind and the Fantastic Four will be back up and running in the Marvel Universe once again. Some good news to start 2018 off right!