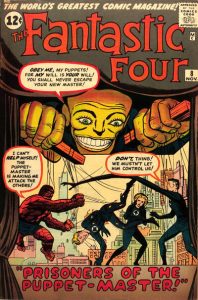 I just picked up a nice run of early Fantastic Four. I was showing off the pile to my pal Mike and our reactions to each issue was telling. Awe and reverence to #1, #2 we both agreed is carrying more weight these days while #3 we both thought was still a sleeper. FF #4 was about to explode was the consensus and we both thought #5 was still the 2nd book to have. FF #6 still isn’t getting the respect it deserves was another thing we both agreed on. We noted how our views pretty well matched and giddily plodded along.

Then we got to the copies of Fantastic Four #7 to #10, those issues would seem anti-climactic considering the heavyweights we just discussed but we ended up having the most animated discussion in this little grouping. You see the Guide groups these 4 books as one price bucket but both Mike and I thought one of them should stand above the others.

That was a fun exercise with Mike and I left it at that but when I got home earlier this evening I logged on to CBD and read Mike Huddleston’s (I know lots of Mikes) great Arcs and Runs post, I new I had my Spotlight, Fantastic Four #8.

I’ve sold a lot of FFs in this little grouping over the years and #8 was always the toughest issue to get, it was usually the 1st to go of the group and the least number of them came in. Mike agreed, he said that in his experiences this was the toughest of this lot. I’m not sure if this relative scarcity is a regional thing, I write out of Hamilton Ontario but I’ve spent years on the US Midwest and Eastern Seaboard con circuits and to my recollection it was always the toughest book of this small grouping.

Fantastic Four #8 is also the strongest cover of this grouping. If the market has tought us anything over the last couple of years it’s that covers rule. The better the cover the higher the demand for the book, easy to remember.

Alicia Masters is the lovely blind sculptor that FF member Ben Grimm a.k.a. the Thing is smitten with.

Stan Lee and Jack Kirby did their best work in the Fantastic Four, the richness of the characters they introduced in early issues like Fantastic Four #8 allowed for the complex and layered storytelling the boys would be laying down a few years later (here I’m again mirroring Mike Huddleston’s sentiments). Alicia Masters played an absolutely pivotal role in what is arguably the best comic story ever in the Galactus Trilogy of Fantastic Four #48 to #50.

In the Galactus Trilogy the Silver Surfer crashes into Alicia’s apartment and it is Alicia that convinces the Surfer that humans, flawed may they be, are

worth fighting for. Check out Alicia on the cover of Fantastic Four #66, this is the book that starts the whole Warlock concept.

Fantastic Four #7 to #10 all currently under-perform on the market relative to Guide, an 8.0 FF #8 can get close to Guide but I see this book as being worth much more in the not too distant future. Fantastic Four #8 is actually the scarcest of this grouping with only 82 copies graded 8.0 or better (vs #10’s relatively plentiful 111 copies).

I think the market will shine on all early Fantastic Four issues in the near future what with all the news or Marvel taking over Fox and getting the rights to the characters back (for film ) so generally speaking it’s a good time to buy. Specifically I see FF #8 making an extra strong run.