Arcs & Runs #51. It’s time to take my semi-annual look at another segment of the landmark Kirby-Lee run on the Fantastic Four issues #1-67. We are on segment number five if you are counting (and I am). Early Fantastic Four comics are a real treat to read and re-read as you get older. They don’t get stale. I once owned a Fantastic Four run from issues #16 through #102 and beyond with a smattering of earlier books. Writing these posts makes me wish I had them all back! I’ve always got the reprints I guess…sigh.

All stories are written by Stan Lee. All pencils are by Jack Kirby, and inking chores are split between Chic Stone and George Roussos. Sol Brodsky and Stan Goldberg help Mr. Kirby on a couple of covers. The gang was at the top of their game in this little run

Let’s get to the books! 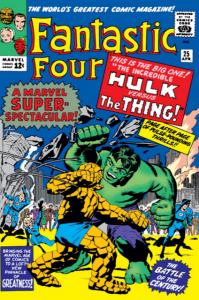 We start our run today with a big-time key FF#25 and the battle of heavy weights, and two of early Marvel’s more popular characters the Thing and The Hulk. Fans appetite for this battle had been wetted back in their first meeting in another Marvel key – Fantastic Four #12.

We begin our story today with Reed Richards, he is working on another formula to change the Thing permanently back to Ben Grimm. This was ever-changing theme in the Fantastic Four stories involving the Thing, to change or not to change. Today Ben did not want to change back, and he swats the potion away from a dejected Reed Richards. Meanwhile in the desert, Rick Jones and the Hulk read about Captain America taking the Hulk’s place in the Avengers. Infuriated the Hulk leaves the desert and returns to New York to take on the Avengers. Back at FF headquarters Reed Richards has come down with a mysterious virus that lays him out and takes Sue Storm out of the picture (staying by his bedside). The Human Torch is heading across town and runs into the newly arrived Hulk. The Hulks sends Johnny Storm to the hospital after a quick skirmish, leaving the table clear for the much anticipated one on one battle between The Thing and The Hulk. The battle rages between the two across New York. The Thing begins to tire and the Hulk only appears to be getting stronger as the battle wages on. Finally, out of gas the Thing is pummelled to helpless submission and the Hulk leaves to find the Avengers. The Thing eventually gets up, and can’t believe he has been thoroughly beaten by the Hulk. He vows to re-join the battle, even if it kills him. Continued next issue.

One side note for those of you who haven’t read the book or heard this story. In one large panel of FF#25 when the Hulk is pounding the Thing, the Hulks face changes. It looked way out of place, but the Hulk’s face quickly returned to normal in the next Hulk image. I could never figure this out as a young kid reading the book. I read years later that Jack Kirby had drawn Marvel bullpen artist Sol Brodsky’s face on the Hulk for just this one panel. I don’t know why he did it (joke, favour, appreciation – who knows), but it was pretty cool they left it in the published book. 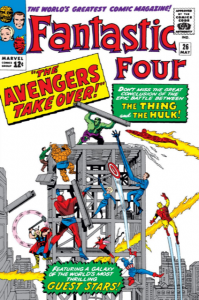 Fantastic Four #26
May 1964
The Avengers Take Over

Part Two of the battle with the Hulk takes on a much different look. Reed Richards has fully recovered with a comic book quick antidote for his virus. Sue is on board, and the Human Torch is also off his hospital bed. The gang races to help The Thing in his battle with the Hulk. They arrive to the fray about the same time as the Avengers and Rick Jones. Both teams see the battle as theirs to fight, and there is the obligatory skirmish between each other before they decide to work together and stop the Hulk. In time and with the help of Rick Jones the Hulk is subdued and returns to Bruce Banner form. Banner appears to drown, but doesn’t of course returning to the pages of the next issue of the Avengers (#5).

The Fantastic Four leave the battle having met the Avengers for the first time, and with lovable Thing. The Thing has a slightly bruised ego and has been beaten – but not beat.

Fantastic Four #25 & #26 have been tied together in value for the first forty years of the Overstreet Price Guide. Over the past few years, issue #25 has gradually started to become more valuable. I like both books. Fantastic Four annual #4 has both books reprinted in it if you are looking for a cheaper alternative to own these stories in comic book form. 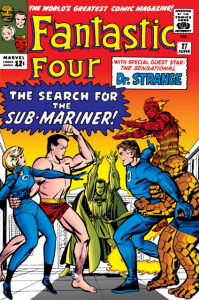 In this issue, the Fantastic Four battle the Sub-Mariner with the assistance of special guest star Doctor Strange. The Sub-Mariner is looking for a queen to share his throne. His only choice is Sue Storm with whom he has been smitten since Fantastic Four #4 and his return to the Marvel universe. The Sub-Mariner dons a disguise and enters the Baxter building, quickly defeating The Human Torch, The Thing, and absconding with Sue Storm. Reed, who has been out buying an engagement ring for Sue, returns to find out the bad news and goes berserk. He takes off leaving the Thing and Torch behind. Unable to track him the Human Torch sends out a “help signal’ to Doctor Strange. The good doctor answers the call quickly in his astral form. He agrees to help Johnny and Ben find Reed. The Doctor locates Reed in the Sub-Mariner’s underwater kingdom and he transport the Torch and Thing there. A fierce battle between Reed and the Sub-Mariner and his minions has been taking place for about five pages now. The overall battle is moving in the Sub-Mariner’s way when Doctor Strange intervenes, transporting the whole team to safety as they make their way back home.

This is Doctor Strange’s first crossover into the Marvel universe from the pages of Strange Tales. It certainly wasn’t his last. Journey Into Mystery #108 with Thor and Loki, Amazing Spider-Man Annual #2, and X-Men #33 and the Juggernaut, come to mind. Early days for Doctor Strange were spent mostly in other dimensions, so these cross-overs introduced him to a new audience who might not have read Strange Tales.

One final note, we can’t leave this book without tipping the hat to the outstanding cover of Fantastic Four #27. One of my favourites. 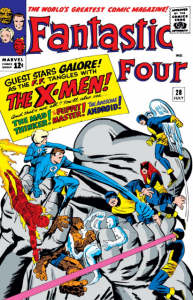 The Mad Thinker and Puppet Master make their first appearance as a bad-guy duo and it is a doozy. The two baddies plan to destroy the Fantastic Four using the X-Men as their foil. They gain control of Professor X’s mind with one of the Puppet Master’s radio-active puppets. The X-Men listen to everything the professor says and he is now in control of the Mad Thinker. The X-Men meet the Fantastic Four for the first time at the Baxter building and it’s going pretty well until X-Men attack the FF. A long battle between each other ensues, and the X-Men are commanded to lead the FF into a Mad Thinker trap. Once this is accomplished, more commands from the Mad Thinker controlled Professor X, this time telling the team to fall asleep. The Beast resists and crushes the Professor X clay doll held by the Puppet Master. It looks like the battle is over, however the Mad Thinker unleashes his Android and another battle begins. The Mad Thinker and Puppet Master use this side battle to escape. The now recovered Professor X puts the Android to sleep and the donnybrook is over. Everyone leaves on good terms. This was a good vehicle for the X-Men, who back then could use all the positive exposure they could get. The little kid in me still can’t figure out how the Puppet Master can mold radio-active clay with his bare hands and not kill himself…. 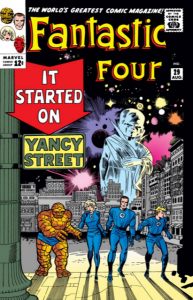 The team and in particular Ben Grimm the Thing are being terrorized by the Yancy Street gang with gags and exploding parcels. The Yancy Street Gang see Ben as a bit of traitor since he quit the as leader of the gang years ago. They never let him forget it. One of the notes issues a challenge to the Thing to a street fight and he takes them up on it. Reed, Sue and Johnny also tag along. Once there they quickly learn it is a trap set by the Red Ghost and his Super-Apes. Taken by surprise the Fantastic four are taken by space-ship to the Blue side of the moon and dumped there to die. Sue’s force field gives them enough air to stumble into and find the Watcher’s hidden underground living space. There are more high-tech gizmos here than the Baxter building. Reed uses one of the gizmos to bring the Red Ghost and his ship down to the Blue area of the moon. There is a battle which the Fantastic Four win of course. The Watcher arrives and sends the team back home to Yancy street.

Fantastic Four #29 was always a tough comic to get in high grade for me anyway. 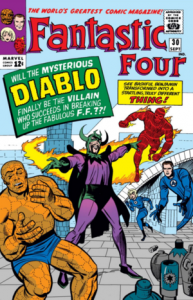 The Dreaded Diablo – sounds like a scary drink or something that happens to you when you eat too many grapes. It is the title of last story here today and introduces a long-standing foe of the Fantastic Four and the marvel universe – the alchemist Diablo. The Fantastic Four are on vacation in- Transylvania and are lost in a forest. They stumble upon a mysterious castle but before they can enter it, they are stopped by the mayor Baron Hugo. He says no one must enter Diablo’s castle and he offers shelter at his own place. The mayor explains that the dreaded Diablo has been imprisoned there for over 100 years and immortal. That evening Diablo summons the Thing who mistakenly sets him free. Diablo partially returns the Thing to Ben Grimm form in return for being a servant of Diablo. Ben jumps at the chance and quickly tells the rest of the Fantastic Four to take a hike. Reed Richards is not so sure about Diablo’s formulation and begins testing it. It is a fake. The damage though may have already been done, Diablo has acquired a powerful army which is to be led by the Thing. The bad news for Diablo is the Thing has discovered the truth and is fighting mad. The Thing single-handily buries the defeated Diablo in his own castle and brings the whole thing to the ground. Diablo has been defeated and the Fantastic Four discover they are still lost in the forest, as our story and this little run has come to an end.

Listed below are the 47th Overstreet Price guide prices for the books covered in today’s post.

I do hope everyone is enjoying their summer, and continued good luck with your wants lists.