It’s time to take a look at the early beginnings of Iron Man. I took a very long time deciding if I was going to post this, as I found these early books to be amongst the weakest of the many characters we have featured on “The First Six”.

One of the most unusual aspects of these early books is the complete lack of any type development in terms of support characters. There are absolutely none. Tony Stark has a number of pretty dates and his factory. That’s it. No long-term villains either. He was basically portrayed as a cool lone wolf jet-setter. I am amazed the title stuck around.

No Marvel character got a bigger boost in popularity in the movies than Iron Man as portrayed by Robert Downey Jr. The cool character that Marvel tried to portray in comics was dynamite on film. RJD elevated the characters popularity in pop culture to heights never seen in comics.

Let’s take a look at Iron Man’s early beginnings as drawn by Jack Kirby and Don Heck, and written by Stan Lee and Larry Lieber shall we. 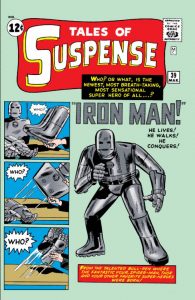 We meet Tony Stark for the first time. He is the owner of Stark Industries and is a genius inventor. He mostly appears to make gadgets that can be used as weapons by the military. Tony Stark and the US army are in South East Asia (Vietnam) testing mini -mortars when Tony Stark triggers a booby trap/land mine. The “enemy’ finds them and Stark is barely alive with pieces of shrapnel surrounding his heart. The Warlord Wong-chu recognizes Stark and knowing he is near death puts him to work, building weapons for his use. Tony knows he is in a spot and begins building a suit of life-saving armour for himself. He lucks out when Wong-chu gives Tony an un-willing assistant in Professor Yinsen a world -class physicist. The professor quickly decides to help Tony and together work to build the armour. They complete it almost in time, but Tony is fading fast and needs a bit more time. Professor Yinsen buys Tony the time at the cost of his own life with a timely distraction. The armour complete, Tony suits up and proceeds to rout the camp and Wong-chu. All of Wong-chus prisoners are set free and “The Iron Man” is born. This origin story was updated a bit, and used to great effect in the first Iron Man movie. I wish I bought this book for $60 (twice!!) back in the 80’s when I had the chance. 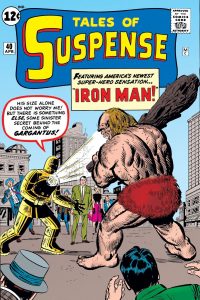 Tony Stark is still busy working on gadgets for the military and taking down minor criminals. He is also the most eligible bachelor on the planet and spends his off time dating beautiful women, we meet two of them in this issue Jeanne and Marion. While on a date with Marion at a circus, trouble erupts when the lions and tigers get loose. Iron Man is there to stop the carnage but Tony discovers that the women and children are afraid of his menacing look. Marion suggests Iron Man should change his look from dull grey to heroic gold. Tony Stark quickly changes his suit to gold with some special paint and whala the “Golden Avenger” is born. The villain in this story is called Gargantus a Neanderthal looking robot controlled by little green men in a flying saucer. Nuff said!

Tales of Suspense #41
The Stronghold of Doctor Strange
May 1963

In this issue we meet the all- powerful Doctor Strange. This isn’t the Doctor Strange we all know and love Doctor Stephen Strange the Master of Mystic arts. This guy is a master villain who seems to be known by everyone in the story, but is not known to us readers. It feels a little odd. Iron Man has his hands full with this Doctor Strange, and only survives with the help of Doctor Strange’s rebellious daughter Carla. This doctor escapes and returns to the pages of Tales of Suspense #48 re-named as Mr. Doll. The heroic Doctor Strange is introduced in July 1963 – a scant two months after this issue in Strange Tales #110. I think this speaks volumes as to how scattered and fly by the seat of your pants things were in those early days of Marvel Super-Heroes. 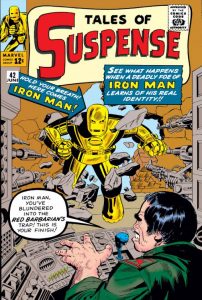 Tales of Suspense #42
Trapped by The Red Barbarian
June 1963

Time for an all-out commie smashing story. There are many communist references and villain’s in early Iron Man books. The Red Barbarian is just another one of them. First the reds are trying to steal an atomic bomb but are thwarted by Iron Man. The Red Barbarian beats his failed agents with a big half-eaten ham-bone (I’m not kidding) for their failure. Next the Red Barbarian sends in da Actor disguised as Tony Stark to infiltrate Stark Industries. This almost works but the actor fails and he gets rubbed out before he can tell the Red Barbarian that Tony Stark is Iron Man and all ends well.

Tales of Suspense #43
Iron Man vs Kala, Queen of the Netherworld
July 1963

Another issue and another experiment at Stark Industries. This one ends in failure and requires Iron Man to bring things under control. Enter Kala Queen of the Netherworld and her people. These folks live in a dome under-earth but were once from Atlantis. Of course, now they want invade the surface world. Iron Man battles through her minions and then takes Kala to the surface. The atmosphere on the surface of the earth turns Kala from drop dead gorgeous to a hideous old hag. She wants none of that and returns to rule the netherworld. Iron Man and then Tony Stark return to the hard work of dating women here on earth. 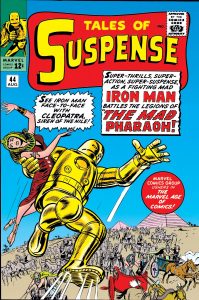 Tales of Suspense #44
Iron Man faces the menace of the Mad Pharaoh!
August 1963

Iron Man meets Cleopatra. This is a playful romp with Iron Man being transported back in time at an old archeological dig site in Egypt. He battles The Mad Pharaoh and rescues Cleopatra from the bad guys. Iron Man light if you will, and the last issue of the first six.

Beginning in Tales of Suspense #45, Tony Stark and Iron Man finally begin to build a team of support characters – Pepper Potts and Happy Hogan. This is followed by a slew of new villains: Crimson Dynamo, The Melter, The Mandarin, The Scarecrow, and The Unicorn. A new slim look and iconic red and gold armour. Two villains that would turn into allies and Avengers, the Black Widow and Hawkeye. And finally, Iron Man also becomes a founding member of The Avengers in this time frame.

Iron Man was finally off and flying, and he is as popular today as he ever has been. 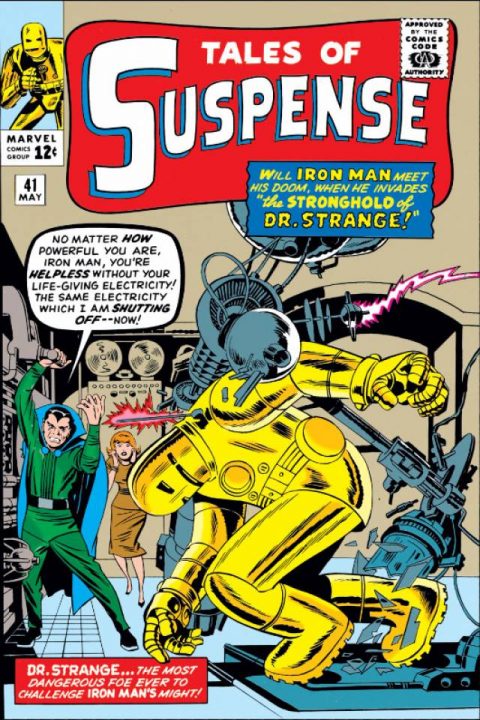 Listed below are the 47th Overstreet Price guide values for the books covered in today’s post.

Looking forward to the next Avengers movie this spring/summer, and I am certain Iron Man will play a major role in it.