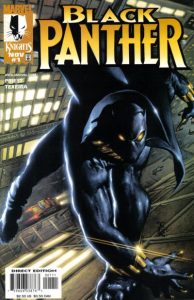 Last night (January 29, 2018) was the world premiere of the Black Panther movie. The film goes to wide release in North America on February 16 and judging from the comic shop talk I’ve been hearing I can safely say this is a highly anticipated film.

I was a huge fan of the Panther’s appearance in the Captain America: Civil War film and have been contemplating going to Fantastic Four #52 (July 1966) as my Spotlight pick for quite a while now. FF #52 (1st apearance of the Black Panther) has been so heavily speculated on since the announcement of the movie that I kept putting it off, I still think it is a must have for any collection.

Over the past few months I also toyed with the idea of Jack Kirby’s 1977 Black Panther #1 but I think that book might be better suited for one of Mike Huddleston’s columns based on the prices it’s been getting lately.

My window of opportunity on a Panther book pre movie was closing fast. Then, in a recent conversation, my pal Anthony pointed me to the work of Christopher Priest and how Priest’s ideas and concepts are on heavy display in the new Panther film.

This week’s undervalued Spotlight shines on the Marvel Knights Black Panther #1 from 1998.

Christopher Priest’s 62 issue run on the Panther from 1988 to 2003 is the standard for the character, the run has almost a cult following and has had quite a large influence on the film just about to be released. I listened to an interview with Priest at the San Diego Comic Con where the interviewer mentions that Chadwick Boseman (the actor playing Black Panther) always references Priest’s run as a major influence.

Judging from the comic book collectors demand for all female teams like Daughters of the Dragon (Deadly Hands of Kung-Fu #32) and the Liberators (Avengers #83) I’d say the demand for the 1st appearance of this team should heat up with the awareness the film will bring.

I think the realization of the importance of Black Panther #1 to the canon and all the important 1st appearances it delivers will make this a book ripe for some appreciation in value.

The 47th Overstreet price break for this book is $6 in the 9.2 grade split.