We will continue on with my Days of Future past hangover and the X-Men’s hidden or lost years, when the title only produced reprints. In this period of time none of the original X-Men had their fortune’s change more than doctor Hank McCoy (aka the Beast). In his original form the Beast seemed like a cross between a gymnast and a small gorilla. He was by far the smartest X-Man and for me one of the least interesting. This all changes in this seven issue stretch of Amazing Adventures. The arc has it’s high and low points and some surprises as well. let’s take a look at them now. 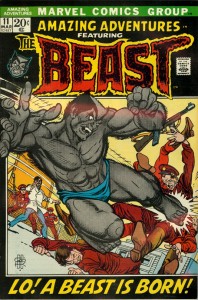 Lo! A Beast is born!

Our story begins with the new furry Beast shadowing a security guard at a genetic research station. It soon becomes clear the guard is planning to steal something, and as the guard begins to break –in the Beast attacks. The guard starts shooting the Beast and hits him – with no effect. An almost instant self healing power is the first new power this new Beast possesses. A group of soldiers arrive and after a firefight apprehend the security guard. The Beast races back to his lab – too late. His change from Hank McCoy to this new Beast is permanent. How? Why? The story moves to flashback mode. First we go to Westchester and Charles Xavier’s school for gifted children. Hank McCoy is about to become its first graduate and is leaving the X-Men to follow his dream of studying genetic mutation at the Brand corporation. Once there he meets his new boss Mr. Grant, a rival Professor Maddicks, and he get’s a foxy assistant named Linda Donaldson with whom he quickly starts a romantic relationship. Life is good. Hank then discovers a hormonal extract that is the chemical cause of mutation. He races to tell his boss Mr. Grant and on his way see’s Professor Maddicks. Maddicks is on the phone with “agent #9” and he the agents are hatching a plan with a security guard to break into Hank’s lab. Hank decides to test the chemical on himself and the results are shown at the beginning of the story. Now in present time the distraught new Beast goes after Professor Maddicks. Unknown to the Beast, Professor Maddicks has been found out, as the security guard “spilled the beans” on his death- bed. The Beast arrives and works through all the soldiers to get to Professor Maddicks, but finds he can’t kill him and lopes out of the building. In the ruins of the office Agent 9 arrives and kills Professor Maddicks for his “failure”. Agent #9 is revealed to be Hank’s love interest Linda Donaldson as this issue comes to a close. Now life is not so good. 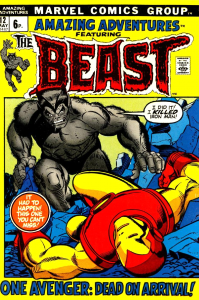 Issue #12 begins with a quick re-cap of the events in issue #11. Hank has to find a way to move forward in this new body. He refuses to accept any help from the X-Men and moves forward on his own. First he makes a latex masque of his Hank McCoy face. Second he finds a way to straighten up and walk like a human being. Next he tries going back to work. His first visitor of the day is Tony Stark and his fiancée Marianne. Next comes Linda Donaldson aka Agent #9. Marianne is an Esper and feels evil in Ms. Donaldson, a notion which Hank rejects. He gets through the day as Hank. At night he removes his disguise and steps outside to find… Iron Man! Iron Man has come back to investigate Marianne’s concerns about Linda Donaldson. There is a good battle which Iron Man wins just as security and Linda Donaldson arrive. She looks like she is one of the good guys to Iron Man. The Beast gets up off the matte and the fight begins again. The Beast is savage and relentless this time pounding Iron Man until he is dead… the Beast leaves in panic. The next page has Iron Man staring in disbelief as the Beast leaves, unable to understand what had just happened. We get to figure it out on the next panel as Mastermind, Unus, and the Blob make an appearance outside of the Brand Corp. Mastermind has convinced the Beast he has killed Iron Man and plans to recruit him into Brotherhood of Evil mutant’s next issue… The cover and story from this issue are re-printed in Avengers #136. The Beast joins the Avengers on a trial basis in issue #137 and becomes an official Avenger in issue #151.

Evil is all in your mind!

The Beast is under the mind control of the mutant Mastermind. In his current condition the Beast is incapable of seeing through Masterminds guise and he reluctantly joins the Brotherhood. Meanwhile back at Brand Corporation Hank McCoy is missing. We meet the new Air force security chief Captain Baxter and his wife Pat (more on them later). Linda Donaldson – Agent #9 is also concerned about Hank’s whereabouts for different reasons. Back to the Beast. Still under Mastermind’s influence he helps the Brotherhood steal the huge Rahmur diamond but the influence is waning. Finally the Beast comes to his senses and attacks the Brotherhood and takes them out. The Beast calls the police and sets things right as this issue comes to an end.

The Beast heads to Stark Industries and meets with Iron Man and sets the story straight with him. He heads home and calls Linda Donaldson and she comes over for visit; everything goes well until she tries to kiss him. No can do with the rubber Hank McCoy mask. Linda leaves and a mysterious female try’s to contact Hank with no luck. He has left for Brand Corp., where he lands in the middle of a group of soldiers and Captain Baxter. He bounces into the building and quickly changes to Hank McCoy. Hank comes out and is brow beaten by Captain Baxter: Hank is running out of plausible excuses when soldiers arrive and say they have seen the Beast on the other side of the plant. Hank goes up to investigate and finds … Quasimodo the living computer! A protracted battle ensues with Quasimodo the victor; however he commits suicide rather than killing the Beast. The Beast feels lucky and also sorry for Quasimodo. The issue ends with the Beast questioning the “reports” cited by Quasimodo in battle about Agent #9. 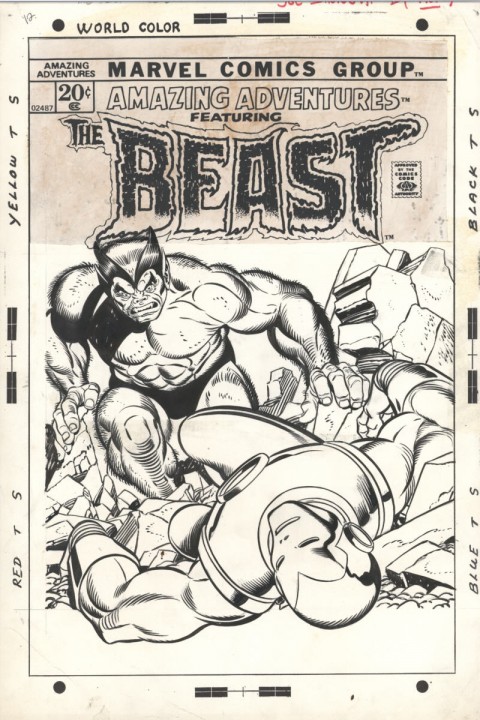 The Beast stumbles through the door of the Baxter’s running into Patty Baxter and collapsing. He is badly hurt and she does what she can to help. The Beast is delirious and when he wakes his fur has changed from gray to black and Patty Baxter knows the Beast is Hank McCoy. A quick change of scene – Westchester and the X-Men. The Angel Warren Worthington has decided he is going to disobey Professor X and go and see Hank and see if he can help him. Back to the Beast he has left Patty Baxter and about a minute later is attacked by The Griffin in mid air. It’s a good battle and the Angel arrives in the middle of it. He doesn’t know which one of them is the bad guy. The Beast gets the upper hand and sends the Griffin spinning to the ground. The Angel goes to save the Griffin and the Griffin knocks him out for his troubles leaving Hank to save the angel while he makes good his escape. Hank and The Angel head to an appointment at about the same time as the mysterious woman from last issue shows up missing Hank again. We switch scenes to Agent #9 who is in conference with Agent #1 of the Secret Empire. The Griffin who is in the employ of “The Secret Empire” arrives and he gives us brief “origin of the Griffin” story. Agent #9 is enraged by both of them and breaks away to monitor a meeting between Hank McCoy and Captain Baxter. Warren and Patty Baxter are also in attendance. Hank gives an accounting of his whereabouts backed by Warren and then is further backed up by Baxter’s wife Patty and Hank is off the hook. Warren and Hank get back into costume and take on and defeat the Griffin. Hank and Warren say there good byes. It was a very good team-up between the two of them.

Patty Baxter is known in the Marvel Universe as Patsy Walker who also works her way to The Avengers issue # 141 and to Hellcat in Avengers #144 and later with The Defenders.

The Griffin and the Beast re-new pleasantries in Marvel team-Up #38.

The mysterious woman finally meets Hank in the last panel of this issue and we meet her next issue as the series takes a turn.

A fun story that takes place in Rutland Vermont. Our mystery girl is Hank’s old girlfriend Vera Cantor. She is in desperate need of a scientist who specializes in mutations. She won’t say anything else but they are headed to Canada. We know they are off to help Cal Rankin (aka The Mimic) in Incredible Hulk issue #161. On their way there they run into the Mighty Marvel Bullpen! Roy Thomas and his wife Jeannie, Len Wein and his wife Glynis, Steve Englehart, and Gerry Conway join in the fun. This group is on their way to a party for friend Tom Fagan, and they ask Hank and Vera to join them. There is a villain here, the Juggernaut no less, who keeps bouncing back and forth between oblivion and earth. The battle between the Beast and the Juggernaut is more of a chase (guess who’s running) and the Beast’s brain wins out in the end. Lot’s of fun with the Marvel Bullpen which keeps this story on the light side. It’s the Beast’s last original story in this series. 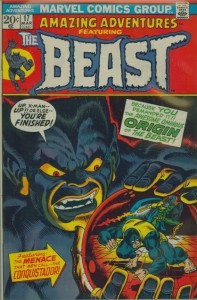 Birth of the Beast

Only the first and last pages of this issue are original. The balance of the book is taken from the back up stories from X-Men #49-53 which detailed the origins of the original X-Men. The text on the first page confirms that this is the last issue of the Beast in Amazing Adventures and the series is cancelled. I like this cover the best of the run and for me is worth owning on its own, plus the Beast origin retelling.

This certainly wasn’t the end of the Beast, who went on to be a long time Avenger before returning to the X-world in the 90’s. This arc elevated Hank McCoy in to an important stand alone character in the Marvel universe to his day. We can look forward to seeing him in future Arcs and Runs.