The lazy hazy days of summer have arrived and it is time to give our regular Arcs & Runs feature a little time off. Well just the month of June. This month’s Arcs & Runs is about just one book, Marvel Tales #1, how I first encountered it, and some of the impact it has had on me throughout my comic collecting life. You might see some of your own early days in these stories.

I grew up on the east side of the small city of Galt (now part of Cambridge), Ontario. It was a textile industry based community back then, and our neighbourhood was made up of working class “war” homes initially built for returning vets from World War II. They were tidy little places with very large lots by today’s standards, and were mostly single income homes with factory workers, milk men, taxi drivers, being able to struggle and make the mortgage payments. Mom’s were usually at home looking after families that averaged 3-6 kids, with some being larger in the double digits. It was a very “tight” neighbourhood and everyone knew everybody.

Our tale begins in June of 1967 on a sultry hot Friday evening after school and I am being hailed by our neighbours from the other side of the shrubs in my parent’s back yard. I squeeze through a small hole in the shrubs and meet Mr. Shingler, “Wilf” our next door neighbour. Wilf is building a flower bed next to his vegetable garden, and had heard that fish make a great fertilizer. He knows I live to fish. He asks me if I would start collecting Carp for him whenever I go fishing to the Grand River. He needs a few right away. Wilf’s wife Marg arrives with a card board box and says she has a “surprise” in this box for me when the first fish arrive. Well twist my arm, I get to go fishing and I am going to get a bonus surprise for doing so.

I am up early Saturday morning. It is a really hot humid day and I want to get out early. I have my quick breakfast of champions, a peanut butter and grape jelly sandwich on “cracked wheat” bread and a glass of “homo” milk. I grab an empty burlap potato bag to carry the fish and I’m off. The river is only a few blocks away from my house down a hill and another half kilometer down a set of railway tracks to my favourite fishing spot. I had been doing this since I was nine and was a common practice for youngsters back then. I do not think many kids get to do this anymore (not even my own). I arrive and set about the business of catching the carp. The fishing was good I quickly get in to three good carp averaging about 7 lbs apiece. The sun start’s beating down and the smell of wild lilac and wild flox fills the air. It smells wonderful. The fishing has tailed off so I load the 3 carp and 1 white sucker into the burlap bag, sling it over my shoulder and start making my way home. As I leave the river my right leg clips a dreaded stinging nettle plant. These plants are numerous on the shores of our river and they come by their name honestly. The stinging eventually subsides about the same time that I realize carrying a 20 lb sack of slimy dead fish and my fishing equipment uphill back home isn’t going to be a picnic either. A few pit stops later I arrive back home and proudly bring the fish next door. The dead fish slid out of the burlap bag in to the ground, like cheese oozing out of grilled cheese sandwich, although not nearly as appetizing. Wilf was pleased – “really good start “he says. I just gazed in horror as the fish fill up about 10% of the hole as I realize the job I have signed up for. I was trying to look excited when Mrs. Shingler appeared with my “surprise” box. I tentatively opened it and found it was loaded with comic books. She knows I also live to read comics! She was cleaning out her two teenage son’s rooms and the books had to go. I have heard that one many times since. A quick thank you and I ran home with my new treasure.

My mom insisted I change my slimy t-shirt and wash myself before doing another thing. I raced through both jobs and opened up the books. I had always thought my next door neighbours David and Alan were a bit odd and this box of comics had finally proved it! Not a single Marvel comic in the bunch!! Even worse there was no Batman either! Plastic Man, Challengers of the Unknown, Metamorpho: who are these guys? Lots of ghost stories and war comics and Archie’s. Seventy three books in total. I was disappointed there were no Marvel books didn’t care that much. I still had – the Galt Book Exchange! 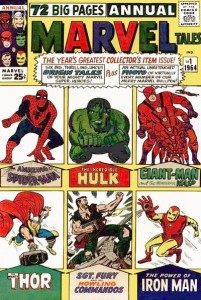 I called one of my comic buddies Steve and told him about the big haul. He was over in a flash (none of those either). We read a few of the odd ball books. We kept thirteen to read that evening (Steve was sleeping over) and decided to trade in the rest. We packed them up on our bikes and headed down town to the exchange. There is nothing like heading down a large hill on your bike and letting the breeze cool you off on the way down the hill on a hot day.  We arrived at the store on Grand avenue. The first thing that hits you when you enter the store is the wave of old smells from the books and magazines. It was over powering, mostly must and mold but I was grateful for them that day as I also could smell “ode de carp” coming from my hasty eleven year-old washing job of myself earlier in the day. I don’t really remember much about the store or owner. It was used book store and had books and magazines of all stripes. It was the only store in town I knew where I could get old comics. I can’t even tell you what he charged for the books as I only traded books in. I kept few of the new books I bought back then as I was much more of a reader than a collector, and we have already seen what happened to the books you left in your room. The owner traded four to six books for one depending on how much he needed or wanted your books. We handed in the books and he brought four stacks of comics for us to look through. I wasn’t having much luck finding books I hadn’t already read in my two stacks when the owner said “ten”. Six to one I thought – I knew they were dogs! Steve had struck gold in his stack finding a long run of Journey Into Mystery/Thor so we were going to be OK. I went back to my pile and about half way through the second stack I came across Marvel Tales #1. I started leafing through it and then realized what I had. The origin stories for all my favourite Marvel super-heroes! I couldn’t believe my eyes. I didn’t know such a book even existed. I went back over to Steve’s pile with my lone book and picked out nine. Steve’s pile had produced a Journey Into Mystery #112 the Thor/Hulk battle and a beat up X-Men #2 as the two highlights. We headed home with our new load of booty.

We had a quick supper, but before we could get back to the books we were pulled in to a large neighbourhood game of “kick the can”. A game of hide and seek for older kids. You hid everywhere you could in a space of about sixteen homes. Imagine that today – hiding in your neighbour’s shrubs in front of the living room picture window or behind the garage. Not likely. Many a first kiss or cigarette were part of that game. A little “garden raiding” usually also took place as well, mostly fruit and not much of it. The police would be called today or the game wouldn’t take place at all as most neighbour and neighbourhoods in the suburbs are nowhere near as connected today. We may have lost something there. It was all in good fun, but for sure it was a different time and place.

Steve and I decided to “sleep out under the stars” as it pretty stifling in the tent. We had flash lights to read the books. We shared them of course but we both wanted that Marvel Tales #1 to read, and it was over and over. It was hard to describe the impact that book had on me. All of my books now had a beginning. Previously I had come into all of the stories not knowing the starting point. It was a great feeling. We found a Marvel Tales #2 soon after and that help complete the picture. We went through all the books that night until we were exhausted. It had been a long eventful day for me. I dozed off to sleep with a sky full of stars, a big moon with no foot-prints, and the very faint smell of carp coming from my sleeping bag.

Next Week – Part Two: Our story continues as this same book Marvel Tales #1 moves thirty plus years in to the future and it lands in a very strange way in the hands of Harry Kramer at Now & Then Books.