Inspiration to write Arcs and Runs comes in many forms. I have a list of story lines from here to Newfoundland to choose from, but only a rough outline of what and when in terms of writing them. Usually I let circumstance (i.e. a movie appearance, anniversary date etc.) choose for me.

This week’s inspiration came while I was out travelling the back roads of Mennonite country on a fishing trip. I had stopped for lunch beside a small trout stream when a young farmer and a team of Clydesdales came down the road. They are magnificent animals. Regal, big and strong they look like they could plough a quarry if they had to.

Thanks to Walter Simonson every time I see a horse my mind invariably drifts to a super hero with a similar appearance and many of the same qualities of those Clydesdales – Beta Ray Bill. Walt Simonson’s critically acclaimed run on Thor ran from issue #337 thru issue #382. He started with this Beta Ray Bill story and followed it up with the introduction of Malekith the Accursed Ruler of the Dark Elves (issue #344), who was the villain in the second Thor movie. Not a bad way to start your new job! Simonson’s run really breathed new life into this title and the many accolades he received are justified.

In all Thor books there are numerous sub plots going on that lead to future stories; I’ll touch on them briefly here and then we’ll get into the meat of our featured story.

We meet the Enchantress’s sister Lore Lie for the first time and she takes up with Loki and the promise of future mayhem.

Balder the Brave is having a tough go of it, after his run in with Hela the Goddess of death. Volgstaff and Hogun do their level best to help him out.

A new threat is slowly developing on earth, but this is a story for another day.

All of these books are written, drawn, and inked by Walter Simonson. 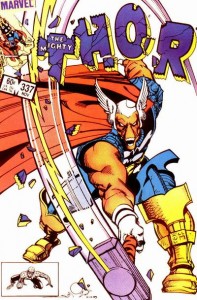 We begin innocently enough with Donald Blake strolling through a park. He is suddenly grabbed and pulled into a waiting car with Nick Fury. Nick needs the assistance of Thor to stop a deep space threat to earth that has been detected by SHIELD (are these guys everywhere?). Thor is quickly transported to the perceived threat (a ship) which begins to attack Thor. Thor quickly breaks through its defence’s and begins to tear it apart, when a large being encased in crystal breaks loose. It is the first time we see Beta Ray Bill. He mistakenly thinks Thor is one of the demons who has been plaguing his race and plans to kill him. A battle ensues and during the skirmish Thor loses track of his hammer a little too long and he reverts to his human form Donald Blake. Meanwhile the ship is in desperate need of repair and is on a crash course with Earth. Beta Ray Bill finds Donald Blake and puts him in a stasis egg to survive the crash. Once on earth Bill continues his search through the ship for Thor and his hammer. He finds only a walking stick and he slams it against the wall of the ship in frustration. There is a collective gasp of amazement amongst all of Thor’s readership as Bill is transformed into Beta Ray Thor! He is holding the Mjolnir hammer. He is worthy. How is this possible? We are still stunned by this revelation when the sky opens up and Odin appears and summons Thor to Asgard. He takes Beta Ray Thor by mistake and leaves Donald Blake on earth as this issue comes to a close with the readership in shock. 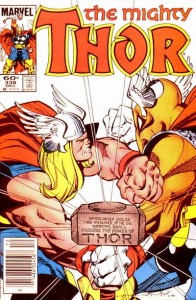 We begin this issue still observing odd going on in space. Star stuff being gathered and forged in a void in space.

Odin and the rest of Asgard are shocked to see Beta Ray Bill in place of the God of Thunder. Odin demands to know how he came to possess the hammer of Thor and where is his son. Bill answers he won it in battle and throws it at Odin who stops it easily in flight. Odin puts Bill in an ethereal prison until he can figure out what is going on. Odin scans earth and see’s Donald Blake. He transports him immediately to Asgard changing him into Thor on route. Upon arrival Odin releases Bill and tells him that no one before has ever lifted the Mjolnir. Bill sees these people are not his enemy and proceeds to give a Coles Notes version of his origin. Bill is a bio-engineered hybrid of his race and their deadliest predator. He was created to protect the survivors of his race as they fled from their exploding galaxy. They have been terrorized and killed by demons on their journey and Bill was excited to find a powerful weapon like the Mjolnir hammer as he could use it to protect his people. Odin tells Thor and Bill the reason he had transported Thor back to Asgard in the first place was because their were “unseen things” taking place in Bill’s former home world area that even the all-seeing eye of Odin could not ascertain. The hammer itself can only be possessed by one however, and Odin declares a battle to death must take place to determine who will carry it. Thor and Bill are transported to the planet Skartheim for a no weapon hand to hand battle. They battle each other into unconsciousness. Bill revives first and he awakens on a moving rock on lava flow heading towards a falls. He could let Thor die there as scripted but decides he is to brave a foe to let die in this manner, he picks him up and leaps off the rock as it goes over the falls. He is transported back to Asgard mid jump. He stands with the still unconscious body of Thor in his arms and once again proclaims he is the rightful owner of the hammer. My personal favourite issue of the four and the obvious homage to the cover of Thor #126 doesn’t hurt either. 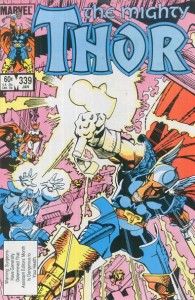 Odin has declared that neither of the combatants will die. Thor and Beta Ray Bill are recovering in Asgard. Thor is ashamed of his defeat and tells Odin he will relinquish his godhood and leave Asgard. Odin visits Beta Ray Bill who also has mixed feelings about his battle with Thor. He is in a quandary. He needs the hammer to protect his people. He also doesn’t want to see Thor hurt and asks Odin if there is someway to resolve this situation. Odin does know a way and leaves for elves country to meet with Eitri in Nidaveillir. The two meet and talk through the night. They have an agreement and a condition to be met before it is binding. Odin must send a female warrior to defeat their elves champion Trogg.

Thor and Beta Ray Bill are having a conversation back on Asgard, when the Lady Sif rides by in full battle armour. She is on the dangerous mission to defeat the elves champion Trogg. Sif is doing this for Odin, Thor, and Beta Ray Bill whom she has become more than just a little curious about. After a protracted battle with the giant elve she is victorious much to the delight of Eitri. Seems there champion had been picking on the smaller elves.

The elves begin their work, forging a mysterious weapon. Odin summons Thor and Beta Ray Bill. The work is almost complete and Odin unleashes a mystical bolt of energy/magic into the elves cauldron. Odin asks Bill if he is ready to accept the weapon and the responsibility that comes with and Bill agrees. He reaches inside and pulls out an enchanted hammer of his own and he changes to Beta Ray Thor. Odin names it Stormbreaker. He than tells Beta Ray and Thor that they must leave immediately as the demons are about to overtake Bill’s peoples ships. Sif joins in and the three of them are off to fight the demon hordes. 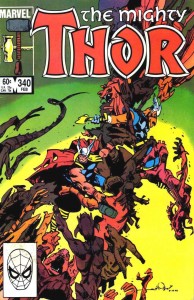 Thor and Beta Ray Bill arrive a little two late for the last ship of the fleet which is being is destroyed by the demons. They move forward to try and find the source of the demons and Sif remains behind trying fend off demons from attacking the rest of the fleet. She is about to be over run when Bill’s ship and companion Skuttlebutt arrives in time to save her. They lead the demons away from the fleet. Meanwhile Thor and Bill have the source of the demons. A huge portal with a giant on the other side is constructing the demons. Thor has a plan. Bill and he will both throw their hammers at each side of the portal in an effort to close or destroy the portal. Back at Skuttlebutt lodge the demons are about to overtake Sif and Skuttlebutt when the demons suddenly disappear. Thor’s plan has worked and the day is saved! Sif takes the opportunity of being alone with Skuttlebutt to get the low-down on Beta Ray Bill. After arriving to a cheering crowd on Asgard the party begins (man I’ll bet they were fun). Sif tells Odin what she has learned about Bill. He has told them the truth about himself but not all the details. He is a one of kind survivor amongst many of his race who was tested for strength, endurance, mental toughness, and surgical alterations to his body. He can never go back to what he once was, and worse his own people find his looks repulsive. The merriment of the party goes on until early the next day. Odin stops the party for a minute to bestow a gift to the two warriors Thor and Beta Ray Bill. He asks them to raise their hammers and he passes on an “old enchantment” through a surge of energy. Bill says he feels nothing, but upon touching the ground with his hammer Stormbreaker he reverts to his original form before the surgical alterations. Bill is overcome with gratitude and emotion, as are we the readers. I felt like I was at the movies watching John Merrick and the Elephant Man for the first time, trying to suppress a golf ball size lump in my throat. Bill wants to stay but knows he must go on and Sif decides to follow him on his mission. Meanwhile back on earth another new threat is emerging for Thor and the Walter Simonson run has begun.

This story and arc is a winner on many levels. A great new character is introduced. Old ones like Odin are seen at their very best. Walter Simonson jumps into the series with both feet and takes us on a four year run to remember.