In the early days of Marvels return to super-hero comics, old horror titles all gradually turned the page to the new genre. New characters were introduced in Tales of Suspense (Iron Man), Tales to Astonish (Ant-Man), and Journey in to Mystery (Thor). Marvel’s flagship horror comic Strange Tales received a recently developed teenage Human Torch from their new smash hit comic The Fantastic Four. Marvel wanted to cash in on the popularity of the new book and also increase the Human Torch’s role in the quickly expanding Marvel universe. The Human Torch was the only teenager of note in the Marvel universe when this series started, but this would change about the time today’s Arc & Run would end.

Let’s get right to it shall we. The art chores are handled as usual by Jolly Jack Kirby with inking help from Dandy Dick Ayers and Spunky Stan Goldberg. Smiling Stan Lee and Laughing Larry Lieber take care of the writing. 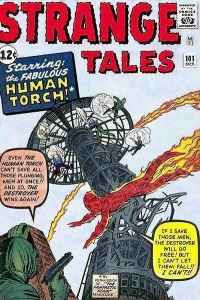 Our first tale begins with a brief re-cap of the origin of the Fantastic Four, and more importantly the Human Torch himself. This is followed by a brief overview of the special apartment (Flame-Heat resistant) he is living in with his sister Sue Storm the Invisible Girl, another member of the Fantastic Four. Johnny and Sue are trying to live as though their identities are a secret. This preposterous notion is dispelled a few issues later when the neighborhood reveals that they were just trying to let them lead normal lives and never brought it up.

The Torch battles a communist agent known as the “Destroyer” who is trying to stop the building of an amusement park that would expose the secret hiding place of a “commie or red” submarine. The Thing arrives and offers to help, but Johnny Storm is having none of it. He battles the “Destroyer” on his own. He also helps the US navy capture the commie submarine and expose the Destroyer as the local publisher of a newspaper – Charles Stanton. It seems a battle with communist/red agents was almost mandatory in the 1962 published books. Thor, Iron Man, and Ant-Man also had run-ins with “the reds”.

The title Strange Tales weaned themselves off of horror books slowly. The Human Torch would appear in a two-part story usually 12-13 pages in length, followed by a couple of 4 page horrors stories that were standard fare in the old Strange Tales format. Strange Tales #1-100 would be an interesting, not to mention expensive set of comics to own today. 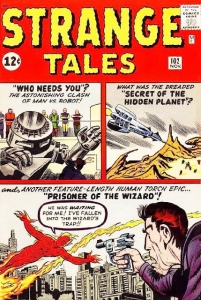 Our second tale begins and we meet The Wizard for the very first time. The Wizard is a master inventor, genius, and daredevil. He is constantly proving his superior intellect with new challenges for himself. He now has sights set on defeating the Human Torch. He makes a methodical, well laid out plan to trap the Torch. This includes a trumped rescue mission to attract the Torch, chemical foams to douse the Torch’s flame, and an asbestos lined prison to contain the now defenseless Human Torch.

The Wizard is planning to complete his defeat of the Torch by impersonating him and making him look like a criminal. He does just that with a specially designed suit that mimics the Human Torch’s flame and flying power (who needs cosmic rays?). Disguised as the Human Torch the Wizard robs banks, starts a prison break-out, disrupts traffic, melts statues etc. The Human Torch finally breaks free but the damage is done. The Wizard offers a chance for the Human Torch to prove his innocence with pictures of himself dressing up as the Human Torch. He must give up his secret identity to do so. The Human Torch fools the Wizard with unseen powers, claiming the ability to levitate objects with out touching them. The Human Torch lifts the pictures out of the Wizard’s hands and he is completely dumbfounded and for the moment – defeated. We soon learn the powers were that of invisibility and Johnny’s big sister Sue, who lends little brother a hand beating the Wizard. The Wizard will be back here in a couple of issues as we move on to… 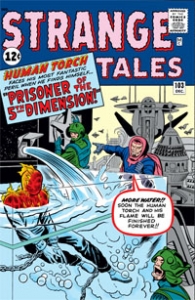 Our third issue in the run, and we find Johnny Storm captive of the music group the 5th Dimension. Well no it’s not as scary as all that. This issue begins in swampland and houses sinking in to the ground for some unseen reason. The Human Torch investigates and stumbles into a race of people from the 5th dimension. They have become aware of our world and are planning to invade it, lead by the warlord Zemu. Zemu has imprisoned the Torch in a liquid holding cell, while preparing his army for the invasion.

There are of course good people on this planet who want nothing to do with world conquest. They free Johnny from his prison led by the beautiful Valeria. The Torch dries off and with a little help from the peaceful populace defeat Zemu and his army. Valeria begs Johnny to stay, but he must return to his sister and his friends back on earth (we have seen Johnny’s friends to date – and none of them look like her!). As the issue closes we find Johnny day-dreaming in class about you know who! 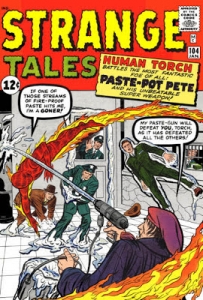 This issue begins with Paste Pot Pete robbing a bank in while Johnny Storm is in the building. Pete successfully robs the bank with the Human Torch chasing behind. Next stop for Pete is an army base and a secret missile. He takes out a group of soldiers with his paste gun and then absconds with the missile. Lucky for Paste-Pot Pete his adhesive gun is like a western movies six-shooter that never runs out of ammo! The Human Torch runs out of flame just as he catches up to Pete. Bad timing – Paste Pot Pete adheres the helpless Johnny Storm to the rocket and it blasts off. The Torch dry’s off just enough to burn off the last of the paste, flames on and is back in action as the rocket lands in the ocean. The very mad Human Torch once again catches up to Pete and he looks like he finally has him when – Pete does a great Spider-Man imitation and catches a ride on a passing jet-liner. He swings behind the jet for a while and then let’s go, falls into the ocean, and is picked up by his crony’s boat and gets away. Leaving the Torch wondering if he will return some day.

This is the most action-packed book of the bunch – on the go from start to finish. I never knew a criminal that looks like a mad French painter racing around like a maniac with a bucket of adhesive paste could be so much fun and dangerous to boot. Paste -Pot Pete was always my guilty pleasure in these early days of Marvel. I was sad to see Pete had changed his name to the Trapster when the Frightful Four were formed and introduced in issue #36 of the Fantastic Four. Paste-Pot Pete’s next appearance is in the Marvel Key – Strange Tales #110 when he teams up with The Wizard to take on the Human Torch, and some guy named Doctor Strange makes his first appearance in the back-up story. 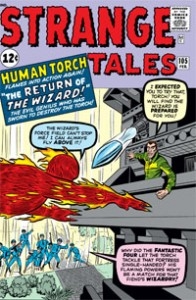 Strange Tales #105
February 1963
The Return of the Wizard

The Wizard escapes from prison and challenges the Human Torch to another battle. Sue Storm is afraid for Johnny and asks Reed Richards and the Thing to help out. They pass – saying Johnny has to learn to stand on his own two feet. The Human Torch is on his way to meet the Wizard. The Invisible Girl follows only this time she is more of hindrance to the Torch than a help, as she was in the first go round with the Wizard. Johnny spends most of time getting Sue out of traps, while trying to elude the Wizard. The Torch finally gets the Wizard with a flaming saw (complete with handle) to cut through the roof above the Wizard’s head. The content of the roof falls on the Wizard knocking him out cold. The police arrive and take the Wizard back to jail. Johnny playfully teases Sue about all her “help” in catching the Wizard as this issue comes to an end. 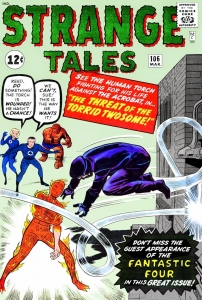 Strange Tales #106
March 1963
The Threat of the Torrid Twosome

Our story begins with the Human Torch working through a test Reed Richards had devised for him. Sue Storm has a visitor named Carl Zante – The world’s greatest acrobat and he wants to meet Johnny Storm the Human Torch. Johnny arrives and is surprised to find out the whole world knows Johnny Storm and the Human Torch are one and the same. Carl Zante wants the Human Torch as a partner, working on cases solving crimes – for money. Zante plants a seed in Johnny’s (tiny) brain that Reed Richards is using him and that he should be making lots of money. The ploy works and Johnny joins Zante and form The Torrid Twosome. There first case is to save a man trapped in a safe from suffocating to death. This is a ruse by Zante who just wants to rob the bank. Once inside Zante douses the Human Torch’s flame and then shoots him. He grabs the money and when he gets out of the bank is confronted by the rest of the Fantastic Four. They have him dead to rights but a very angry Human Torch comes out of the bank and proclaims “he’s mine”. The Torch melts the ground beneath Zante’s feet and he is caught. The Torch apologizes to his team mates, as they are re-united once more, and stroll off in to the end of the book and our Arc & Run.

Carl Zante plays a pivotal role in his next appearance in Strange Tales #114 disguised as Captain America. This was a try-out book for the potential re-emergence of Captain America and he did not too long after in the legendary Avengers #4.

March 1963 was also an important date in comics featuring the first issue of Amazing Spider-Man #1. The Fantastic Four were busy folks this month!

Strange Tales #101 used to be a big deal back in the late seventies when I cranked up comic collecting for the second time. It was held in fairly high regard around my area and was very difficult to find in grade, as were the other books we covered today. I think over time this book has lost a bit of its lustre in comparison to its contemporaries, but it is still not a bad book to own.

The 45th Overstreet Price prices are listed below.

Continued good luck with your want lists. See you in two weeks.