Continuing from last week’s Arcs & Runs of Tales of Suspense issues 48 through 53, this week featuring 54 through 59. This twelve issue run is packed with first appearances and new beginnings. We will focus on the importance of the book itself and a very brief recounting of the story. 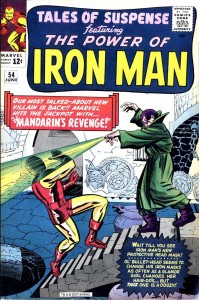 We begin with our first two part story in Tales of Suspense. Tony Stark is sent by the pentagon to investigate the crash of US satellite in China tied to his technology. This is in Mandarin territory and Tony reflects on his previous battle with the Warlord. Stark is captured almost immediately upon arrival by the Mandarins thugs but quickly gets away and changes to Iron Man. The Mandarin has been itching for another shot at Iron Man and defeats the golden avenger pretty handily in this go round. Iron Man is bound and helpless with no power (again) as this issue comes to and end to be continued…. 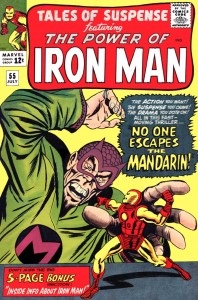 No one escapes the Mandarin

Cover, art, and story credits the same as last issue.

My favourite cover of the run with an oversized image of the Mandarin ready to crush a diminutive Iron Man. We left Iron Man trussed up like a turkey last issue in metal coils at the mercy of the Mandarin. Iron Man tricks the Mandarin into looking for Tony Stark, breaks free, saves a missile and locates and destroys the Mandarin interceptor ray. All he has to now is beat a very angry Mandarin and get away. Which he eventually does with some difficulty. Its clear by the end of this book the Mandarin is on his way to be Iron Man’s big bad. The Mandarins next appearance is in issues 61 and 62 of Tales of Suspense and features his origin and the 10 Makluan power rings.

This issue also contains a five page spread on everything you ever wanted to know about Iron Man. This is something you usually have in an annual, and there was a story/rumour that this two-parter was originally planned as a Tales of Suspense Annual that never took place. Too bad; I would have really enjoyed that. 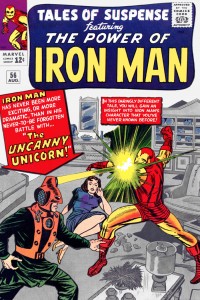 Our story begins with Tony Stark having an Iron Man no more moment… Tony chucks the uniform, doesn’t respond to an Avengers distress call and gets out his little black book. You know the one Pepper. Tony leaves the plant and goes out on a date, one of many we presume. Meanwhile a new villain the Unicorn attacks Stark Industries and critically injures Happy Hogan in the process with his Unicorn Horn. He then takes off with Pepper Potts using her as bait to trap Iron Man. We are treated to a Unicorn origin story. He is another communist agent trained and equipped by the Professor Vanko/Crimson Dynamo before is defection to the west. He is loaded with the latest tech and looks like he will be an imposing foe. Iron Man tracks the Unicorn and Pepper down. The Unicorn and Iron Man clash, Iron Man manages to get Pepper away and back to Stark Industries.  The Unicorn follows and plants a bomb in the plant. Iron Man sees the Unicorn who is challenging him. The two clash once again and the Unicorn tells Iron Man about the bomb. He tries beating the location out of the Unicorn to no avail. He agrees to board a plane with the Unicorn back beyond the Iron curtain if the Unicorn will remove the bomb from the plant. The Unicorn agrees. The Unicorn arranges for the jet and they all board. Once on board Iron Man feels he has kept his part of the deal. He breaks out destroying the plane in the process. The Unicorn escapes and then joins Count Nefaria and his band of second tier bad guys in X-Men #23. The Unicorn doesn’t really belong in that group and he does come back to the pages of Iron Man once he is in his own book beginning with Iron Man #4. Meanwhile good news on the home front as Happy Hogan pulls through and a tearful Pepper Potts rejoices at the news. It is clear she is harbouring deeper feelings for Happy than she has been letting on. 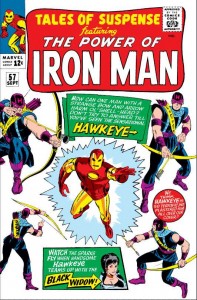 All art by Don Heck. Story by Stan Lee.

Another smoking hot book from the run this time featuring the first appearance of Hawkeye. Our story begins with Tony Stark out on a date to the circus with Pepper Potts. They are watching a marksman with a bow and arrow when a problem arises on a circus ride. Tony Stark changes into Iron Man and saves all of the people on the defective ride to the accolades from the crowd. The jealous marksman decides he can be a super-hero too and proceeds to manufacture a costume and a couple of trick arrows. It turns out he is the best seamstress since Peter Parker and perfect uniform is constructed and Hawkeye is born.  Hawkeye begins his life as a super-hero with Peter Parkers luck too as he gets blamed by the police for the crime he has prevented. He is on the run and a gorgeous female stops to pick him up. It is the Black Widow!  The Black Widow wants help to defeat Iron Man and the well hooked Hawkeye agrees to help her. She provides Hawkeye with a lab and he makes some pretty deadly arrows there and then it’s off to Stark Industries. Once there Hawkeye starts tearing up the place hoping to draw Iron Man out. Once out a battle ensues and Hawkeyes new arrows make him a deadly foe. The battle moves off-sight near a marina where the Black Widow is waiting for a victorious (she hopes) Hawkeye. The battle is still on at the marina when it appears Iron Man get’s the upper hand, but Hawkeye is playing possum and shoots a deadly demolition arrow at Iron Man. The arrow explodes but glances off Iron Man and hits the Black Widow. A traumatized Hawkeye picks up the Black Widow and they escape in a waiting boat.

The Black Widow and Hawkeye team-up twice more in the pages of Tales of Suspense issues #60 & 64 before Hawkeye joins the Avengers in issue #16. The Black Widow takes a longer and more serpentine route to finally obtain Avengers status. She has multiple appearances in the Avengers, her own book in Amazing Adventures, and long run with Daredevil before finally being granted Avenger membership status in Avengers #111. Hawkeye and the Black Widow are firmly entrenched in the marvel universe and are both big time Avengers on the movie screen as well. 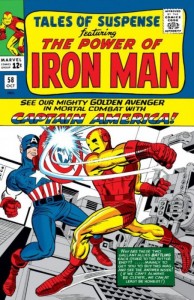 In mortal combat with Captain America

Iron Man comes across Kraven the Hunter trying to sneak back into country following the events in Amazing Spider-Man #15 and he takes Kraven out with one punch. The Chameleon has been hiding and he now has a plan to beat Iron Man. The next day at Stark Industries a beaten up Captain America arrives and spins a tale of how he has been taken out at Avengers HQ by the Chameleon who has swiped all of his powers and memories. Iron Man races to Avengers HQ not knowing that it was in fact the Chameleon who had spun this tale and the real Captain America is at HQ. A well contested battle ensues with the confused Captain America battling the duped Iron Man. Two guest stars Giant Man and the Wasp put and end to the shenanigans as they have found the Chameleon out with the help of the ants. Cap is no worse for wear and Iron Man feels like an idiot. Pepper and Happy have been put through the wringer in this episode as well. Also of note this is the last episode of Tales of the Watcher in the pages of TOS. I haven’t been reviewing these stories but there was a lot of good stuff in these stories and they were a real plus for the books. I would also have to say this particular book was the hardest one for me to find in grade. 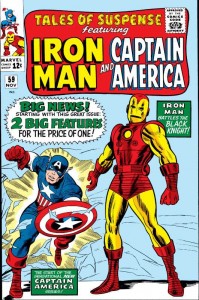 This book had to be a bit of a kick in the crotch if you were an Iron Man fan back then as he basically had his own book for twenty issues and was now going to a ten page split format. He survives just fine though, and his first battle here is with the Black Knight (Nathan Garrett). It is a short spirited battle and is over in 10 pages. This would not be the norm going forward as most stories were two to three issues in length.

Captain America begins with a battle against an upscale gang of thugs (Hydra like) who attack Avengers HQ. Most of his early stories were re-enactments of the WWII days. Over time he gets into present time with Nick Fury, Sharon Carter and Shield and all the baddies like AIM, Hydra and of course the return of the Red Skull.

I personally really liked these split books although I know there are many detractors, and understand the reasons for not liking these books. In general I think these books are still overlooked and undervalued for content given.

44th Overstreet values are listed below.